A new documentary has exposed the atrocious working conditions of Bangladesh garment factories in an enlightening undercover investigation which sees workers be victims of verbal and physical abuse under strenuous long hours.

"This is the reality of the fashion industry, it's a stinking business and most of our clothes are covered in blood."

An eye-opening TV documentary has exposed the shocking reality behind Bangladesh’s garment factories and sweatshops which regularly provide the clothing that most of us in Britain wear on a daily basis.

Broadcast on ITV1’s Exposure: Fashion Factories Undercover, the documentary investigates a number of garment factories in Bangladesh that offer squalid working conditions for its employees.

Cheap labour is perhaps one of South Asia’s worst kept secrets. It is estimated that around 4 million people work in garment factories across Bangladesh.

Many of these workers are children who suffer poor working environments, within decrepit buildings and run-down areas; they are faced with padlocked fire escapes and forged signatures for non-existent training days. 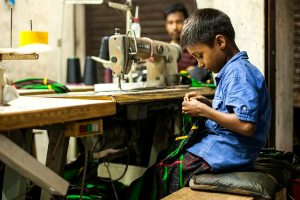 But it is not only the structural environment that is at a safety risk. In the documentary, presenter Laura Kuesnssberg, explains that the majority of workers suffer ‘daily violence’, ‘verbal abuse’ and ‘constant intense pressure to meet deadlines’.

These factories offer appalling wages for maximum hour shifts. Some shifts can extend to almost 12 to 13 hours a day for a wage of only £3. Children who have not even reached their teens are also employed without question and are given the same harsh treatment as their adult colleagues.

But what is perhaps a poignant truth about these undercover findings is that it clearly signifies that nothing has changed since the devastating building collapse of the Rana Plaza in April 2013.

The news outbreak of a factory building collapsing into rubble is still fresh for many. The eight-storey Rana Plaza, in the nation’s capital city, Dhaka, fell into debris, killing over 1,000 workers and injuring 2,500. This it seems, is the price we pay for fashion. 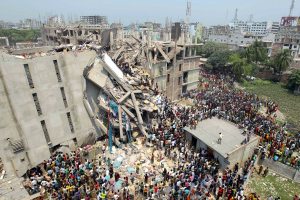 Startlingly, it was announced that cracks had appeared in the walls and pillars just a day before, which had led to the building being momentarily evacuated. However, management later forced its workers to return to work after they deemed it to be safe.

One such worker was 23-year-old Roxana Begum who lost her leg in the crushing concrete. She shared her story on Exposure:

At the time, Bangladeshi Nobel Peace Prize winner, Muhammad Yunus admitted: “The crack in Rana Plaza that caused the collapse of the building has only shown us that if we don’t face up to the cracks in our state systems, we as a nation will get lost in the debris of the collapse.”

But while the incident did see a considerable global outcry, in reality, life for those working in sweatshops has altered very little. Workers are denied basic human rights, and with safety regulations repeatedly ignored, their lives are continually put at risk. 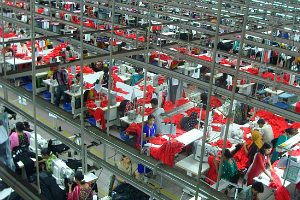 But who is to blame for the atrocities that ordinary Bangladeshi citizens face? Fashion designer Katherine Hamnett says:

“There should be penalties enforced within our economic blocks if there are transgressions by brands and they should be penalties that hurt, we’re not talking about £20,000, they spend that on champagne in a night, it needs to be £5 million, £10 million.

“Then the brands will police it [the industry] better, they will be following the auditors, they will be sending people undercover to make sure, this is the only way you can do it.”

Katherine insists that it is the fashion industry who is to blame for the hardships that many Bangladeshi garment workers face. It is no secret that in an industry where profit is key for survival, companies will look for those who can produce clothing at the cheapest cost. 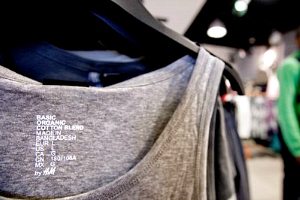 The majority of the garments and clothes made in these dilapidated buildings are for Western brands and designers. The UK is the third biggest supplier with Bangladesh.

Of those mentioned in Exposure are British retailers Lee Cooper, BHS and JD Williams. Not all companies however, are prepared to take blame for the conditions in which their clothes are made.

In a firm statement, Lee Cooper said: “Our group operates in over 40 countries and arranges inspections of hundreds of factories each year. We take our responsibilities seriously in all the countries our suppliers source from.

“We employ a strict set of rules to ensure our licensees source responsibly and can confirm that this production is either counterfeit or unauthorised.”

Hoping to raise awareness of the dire situation that surrounds many of the workers is Labour Behind the Label (LBL), a campaign that advocates for the fair rights of workers in the clothing industry.

From the campaign, Sam Maher admits: “What the retailers are interested in is getting their clothes produced at the lowest possible price at the quickest possible deadline. It’s not about the people inside the industry, it’s just about the profit that can be made.” 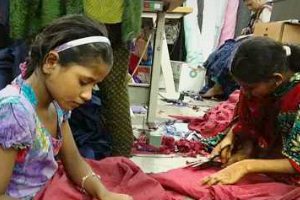 CCC, in collaboration with the International Labour Rights Forum (ILRF), published a report entitled ‘Still Waiting’, which highlights the difficulties that many victims face and the compensation that they are yet to receive following the aftermath of Rana Plaza.

They have also used the report to name and shame those companies who have yet to offer any compensation to those workers and their families affected by the tragedy, and ‘thereby take financial responsibility for a disaster that they failed to prevent’.

But while such human rights campaigns continue to work hard to ensure that these victims receive justice, what about those who continue to suffer the harsh conditions of abusive Bangladesh garment factories? What about those children who are forced into slave labour without any support from their employers and elders?

It is evident that a clear responsibility needs to be shouldered by both suppliers and Western companies. Only then can action be appropriately taken to combat salve and child labour and ensure that fair working rights are given to all.

Aisha is an editor and a creative writer. Her passions include music, theatre, art and reading. Her motto is “Life is too short, so eat dessert first!”
BBC Asian Network celebrates Highest Listeners
BBC Investigation uncovers Fraudulent Student Visas