With Baahubali 2: The Conclusion premiering at BFI London, DESIblitz exclusively chats with the cast and crew about this magnum-opus Indian epic film!

"Creating the drama between those characters, gave us so much energy and pleasure."

The creators of Mahishmati kingdom have descended from India, into London.

The cast and crew of Baahubali 2: The Conclusion arrived in the UK for the premiere of the film, held at BFI Southbank on 2nd May, 2017.

SS Rajamouli is one of the finest directors of Indian cinema. Prior to the Baahubali films, Rajamouli directed several award-winning fantasy and romance films including Magadheera (2009) and Eega (2012). His work has undoubtedly expanded the horizons of regional cinema.

His first instalment, Baahubali: The Beginning was released in 2015.

It narrates the story of an orphan, Shivudu (Prabhas) who discovers his royal roots and sets out on a journey of righteousness and justice to fulfil his destiny. 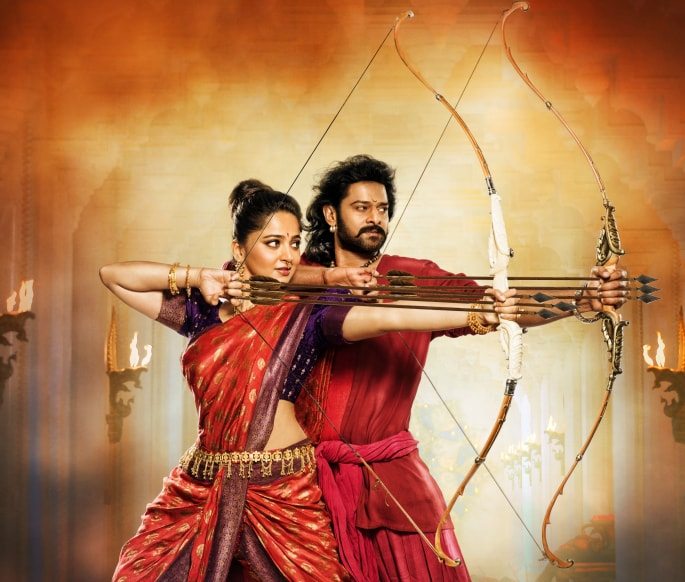 Baahubali 2 is a continuation of the first film which ends on an epic cliffhanger. Viewers were left on the edge of their seat after it was revealed that Katappa (Sathyaraj) killed prince Baahubali (also played by Prabhas). Why? Watch Baahubali 2 to find out!

The first part of Baahubali (like the second part) released in multiple Indian languages: Telugu, Hindi, Tamil and Malayalam.

So what can we expect from Baahubali 2? Rajamouli tells DESIblitz:

“I don’t need to tell people what to expect, because of the tremendous success of the first film and having the cliff-hanger quotient at the end (laughs). People already had their own opinions about part two. They already have their own story in their mind. Now, my job is to give them a film which meets their expectations or is better than that.” 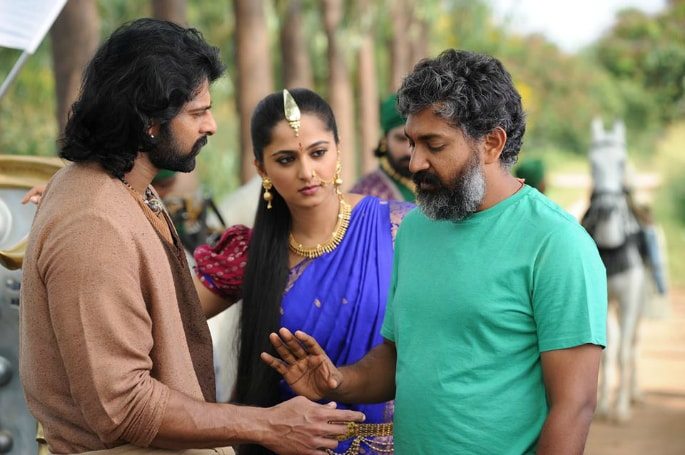 It has been over a decade since Anushka made her movie debut with Puri Jagannadh’s Super and along the way she has won numerous awards.

Anushka has even appeared in commercially successful and critically acclaimed films like Arundhati, Vettaikaran, Vedham and Singam.

In the second instalment of Baahubali, Anushka portrays the role of fiery princess, Maharani Devasena. The 35-year-old actress strongly believes that Devasena is an iconic character for her career:

“I have never played someone who is so strong. In Arundhati, there was the grace, poise and strength. I feel Devasena’s character has more shades. You have different shades of a woman, you see when she’s a young princes to being a mother. Each shade is quite intense.”

The film also showcases women power through three pivotal characters. First, is Sivagami (Ramya Krishnan), the queen of Maahishmati kingdom who does not allow anything to obstruct her duty.

Second, is of course, Devasena (Anushka Shetty), a fiery princess who takes pride and does not allow herself to be dictated or overruled. Third, is Avanthika (Tamannaah Bhatia), a warrior whose group has indulged in guerrilla warfare against evil king Bhallala Deva (Rana Dagubatti). 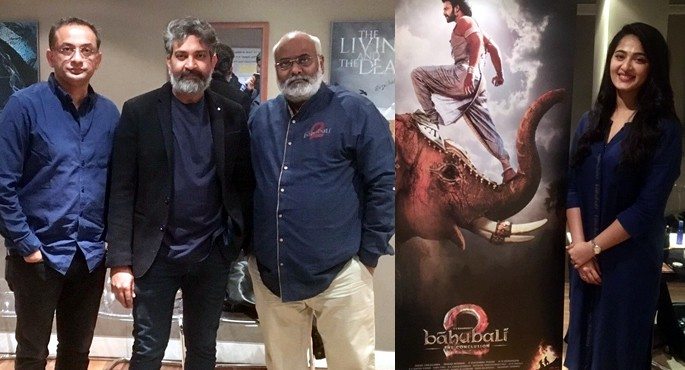 In Hindi cinema, many actresses have essayed the role of on-screen mothers and partners of their co-stars. Remember Waheeda Rahman in Trishul and Sharmila Tagore in Aradhana?

As for Anushka Shetty, it is commendable to see her play the on-screen mother as well as the partner of Prabhas. Comparing the two roles, Shetty tells us:

“The young, I would say is much easier because of the movies I’ve been doing, whether it is Arundhati or Rudharma Devi – where I’ve played a princess. But again, Devasena stands out because of the rebel she is. At the same time, she is very deep with her emotions and is very vulnerable.

“I was a little worried to be playing the mother. Just before Baahubali, Prabhas and I did Mirchi together. People have always seen us together. I was wondering how would I pull it off? There was a little doubt on that.”

Listen to our full interview with Anushka Shetty here:

The beauty of the Baahubali series is the fact that the film draws so many parallels with various Indian mythological texts. In fact, the craze of Baahubali has grown so much around the globe that Indian cinema will always remember two iconic characters: Katappa and Baahubali. Director Rajamouli explains:

“What drove us to do this kind of film is the characterisations that were created by my father Mr K V Vijayendra Prasad. The characters of Sivagami, Katappa, Bhallaldeva or Baahubali, they were so strong and very individualistic.

“Creating the drama between those characters, gave us so much energy and pleasure. There was no stopping us once we had the characters!”

The Music of Baahubali 2 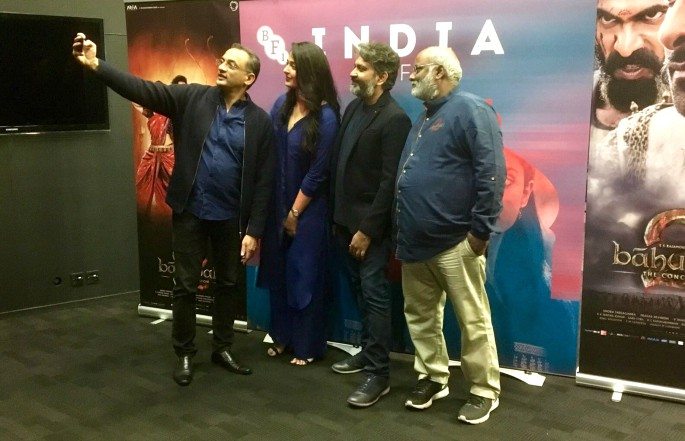 Having composed for epic films like Magadheera in the past, it is not easy to produce a chartbuster album like Baahubali 2.

MM Keeravani, whose music career spans over 36 years, told DESIblitz about some of the challenges he has faced:

“I didn’t take it as a challenge, I would rather call it inspiration. The story and director’s vision will always inspire me, which will lead into the proper translation of music automatically. I don’t usually find difficulty in doing my job.”

The talented composer and playback singer has left an indelible mark across Telugu, Tamil, Kannada, Malayalam and Hindi cinema.

Having composed the music for both films, the songs of Baahubali 2 are just as majestic as the first. So which tracks are his favourite?

“There are two. First, is the celebration song, ‘Saahore Baahubali’ which is sung by Daler Mehndi. Then there is ‘Dandaalayyaa’. That is also a kind of celebration song, but is quite special as its sung by my son, Bhairava Keeravani (named as Kaala Bhairava in the album).”

Baahubali 2 ~ A Visual Feast for the Eyes 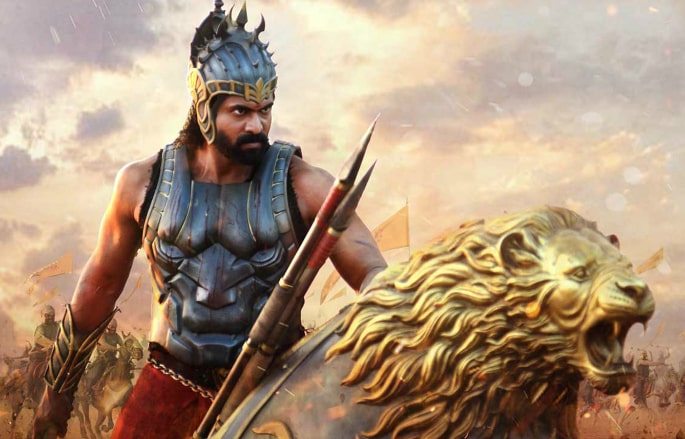 Besides the strong characters and authentic concept, the special effects in Baahubali 2 are truly path-breaking for Indian cinema.

The talented filmmaker, Rajamouli, also thanks his wonderful team: “For the first part, it was the VFX supervisor Mr V Srinivas Mohan and for the second part it was Mr Kamal Khanna.”

He adds: “Both of them have been very strong and knowledgeable in their fields. Of course, there have been many other studios who have collaborated with us to work on the films. But principally, these two guys are responsible to get the effects so perfect, neat and well-blended with the film. I give all the credit to those two guys (Mohan and Khanna).”

Listen to our full interview with the Baahubali 2 team here:

Overall, Baahubali 2 is truly pathbreaking for Indian cinema. Not only are the special effects and stunts exceptional, but the performances, music and Rajamouli’s grand vision have won the hearts of millions across the globe.

DESIblitz congratulates the entire team of Baahubali 2 on their phenomenal success!

Anuj is a journalism graduate. His passion is in Film, Television, dancing, acting and presenting. His ambition is to become a movie critic and host his own talk show. His motto is: "Believe you can and you're halfway there."
Akshay Kumar receives his First Ever National Film Award
Salman Khan’s Tubelight shows War Horrors in Teaser