Arrested Tree by British in Pakistan still in Chains

In Landi Kotal, Pakistan, stands a banyan tree secured with chains since colonial times, when a British Army Officer had it arrested. DESIblitz has more.

Tied within the Khyber roots of Landi Kotal, Pakistan, with branches spreading across the grounds of Rifles Mess, supposedly appears an episode of the British Raj. In the form of a chained-up tree.

A banyan tree, to be precise, arrested to prevent it from escaping.

During the high noon of the British Empire, a drunk British Army Officer, James Squid, allegedly claimed that he saw the tree approaching towards him.

In his heavy state of drunkenness, he ordered a Sergeant to put it under arrest. This lockdown has been in effect since 1898.

Although the unusual arrest is not recent, it has become increasingly apparent on social media.

Some online users have picked up on the hilarity of an arrested tree stuck in chains: ‘‘This is probably one of the greatest practical jokes in history.’’

‘‘Haha…I think it’s great! Should stand as a serving testament to the effects of too much alcohol.’’

On the more serious side, Pakistan Sugar Mills Association Chairman, Javed Kayani, recognises the tree as a remarkable example of colonialism:

‘‘This chained, century-old tree in #Pakistan is a perfect metaphor for colonialism & draconian laws enforced by British,’’ as stated on his Twitter account.

“Ah, the delights of colonialism! @ishaantharoor on the Pakistani banyan tree that is still ‘under arrest’.”

Ah, the delights of colonialism! @ishaantharoor on the Pakistani banyan tree that is still "under arrest": https://t.co/P7bAcd5Mr3

“I AM UNDER ARREST”

Unlike the mysterious chained oak tree in Staffordshire, the Pakistani accused tree carries a plaque slate on its branches, which reads:

“One evening British officer, heavily drunk, thought that I was moving from my original location and ordered Mess Sergeant to arrest me. Since then I am under arrest.”

Landi Kotal is a Federally Administered Tribal town, situated in the north of Pakistan. The Frontier Crimes Regulation (FCR), introduced by the British crown, apply to cases dealt within this town.

One local resident told The Express Tribune, that although James Squid was in an inebriated state at the time, there was some symbolic resonance to a tree placed under arrest:

“Through this act, the British basically implied to the tribesmen that if they dared act against the Raj, they too would be punished in a similar fashion.” 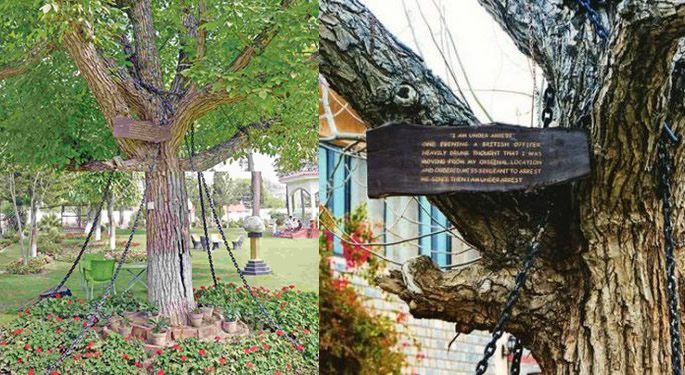 Journalist, Safdar Dawar, stressed that: “It means that we are still in prison by the FCR law.”

On the other hand, Akbar Bhatti, a residence of Peshawar and a former Cameraman for Pakistan Television News, told DESIblitz:

“The tree setting is simply to attract tourists. To illustrate how the locals were treated. It would have grown around the chains in the past years.”

The arrested tree is an amusing piece of colonial art in Pakistan. But, it is considered sacred, and one of the most respected trees across the border, in India.

Author Leela Prasad, in Live Like the Banyan Tree, describes the features of the banyan tree. She states that Indian traders have built a temple for religious discourses under the tree. She further adds: “For many Indian communities, it is a symbol of never-ending life.

“The capacious spread, the close knit-foliage, the strong hanging roots, have all contributed to the banyan’s vibrant social presence.”

Perhaps these long-lasting features of the tree indicate its up to date existence in Pakistan?

Whether the tree is considered a living reflection of colonialism, a symbol of worship, a funny story, or simply a piece of artistic expression, it will continue to let the world discover its innocence with the signboard hung on its neck, reading:

“I am under arrest.”

Anam has studied English Language & Literature and Law. She has a creative eye for colour and a passion for design. She is a British-German Pakistani "Wandering Between Two Worlds."
Kripa Joshi’s comic Miss Moti tackles Body Issues
How Alexander the Great influenced South Asia