An Insight into ‘This Way To The Revolution’

‘This Way To The Revolution’ depicts Birmingham’s history of 1968. Read more to find out about life for South Asians during this year.

“You felt as if you had never left your country”

A thumb through the colour bound pages transports you to a time when Birmingham was finding its feet, shooting through its adolescent phase, desperately scrambling for a new identity.

‘This Way To The Revolution’ is unique. It sets the story in one year, the year 1968.

The revolt was inescapable, with significant events like Martin Luther King’s assassination leading to inevitable riots, to Enoch Powell’s controversial ‘Rivers of Blood’ speech receiving the response of protests rippling through emerging Black and Asian communities.

These events are highlighted thoughtfully in a timeline across two sets of double pages.

Running parallel, one timeline announces world events, and the other, the cosy nook of local history, Birmingham’s notable events of 1968.

South Asians were growing in numbers. 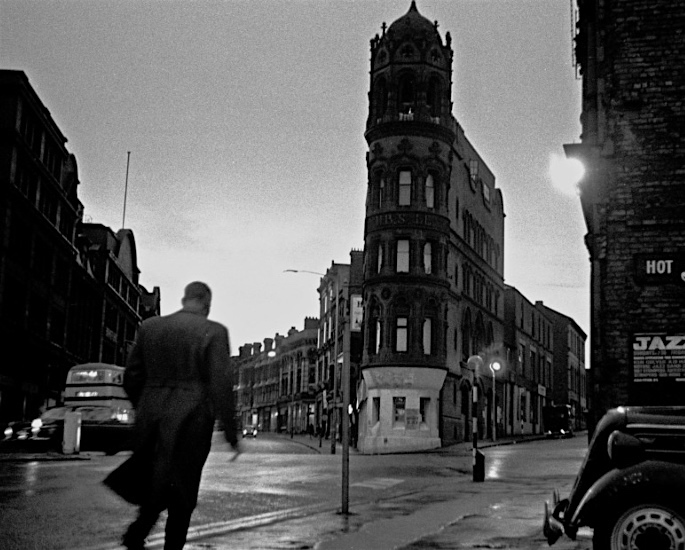 After the Partition in 1947, Britain slowly trickled in South Asians – as many as they could get their hands on – lured with the promise of good food, a good home for their families and an overall good life.

It worked, 1968 was the beginning of the homegrown British Asians, and they had something to say.

A notable spread in Francis’s book is aptly named ‘Asian Teenager’ filled with the exotic colours of purple pages and yellow text – two stark contrasting hues on the colour wheel.

We had made it to the radio. The British Asian experience was now relatable, sitting pretty on the airwaves, thanks to the works of journalist Dilip Hiro.

Hiro had “discovered the wonderful world of English dating” and became mixed into the British Asian experience.

Asians craved connections, a unified understanding of the woes growing up with parents from different countries, one that you should feel connected to but just can’t.

The aim was to be heard, to understand the glamour of Hollywood and transport it to the illustrious Bollywood industry, a mirror image of yourself but with echoes of a Hollywood storyline.

But this was not something restricted to Asian fantasy. As Birmingham grew, it grew with an American mind frame, to expand bigger, grander, not sticking to British ideals.

But unlike Hollywood, the British Asian style was newly discovered.

The show ‘Asian Teenager’ were extracts of life documented in Southall (a town in London, also called “a small Punjab”) and Birmingham, and for the first time, linking two cities with one experience.

But the second half is where the chatter lies. Suitably named ‘Too Shy in These Matters’ a rendition to how Asian parents are notoriously known for the lack of ‘the talk’.

This section covered everything else, music, puberty and sexual endeavours.

The show received mixed reviews but was the beginning of something glorious.

“It was unusual to hear young British Asians reflecting on the tensions they had to navigate each day between their parents’ values and those of the host society” – chapter ‘Asian Teenager’.

Francis’s book discusses the physical revolutions inside Birmingham. But this chapter features a revolution of its own standing – acceptance.

It’s an origin story. Many British Asians still cry for more representation in media for people who have a shred of resemblance to them, obviously, something stemming back further than 1968.

But for the first time, there is a glimmer of hope – someone wants to hear our stories. Someone can relate.

Weirdly enough, all British Asians are going through the same thing even after all this time.

Imagine, the waft of masala chai, in a small marble table topped café. Behind carefully painted is a homage to India – The Taj Mahal. Desi culture had swanned its way into shops, attracting art lovers for miles.

Hubs like Pyar Ka Sagar Café occupied spaces on the Clevedon Road offered a home away from home: “People would come just to see the paintings.”

Desi shops were frequently popping up providing centres of reunions, pockets of the Indian subcontinent in England.

Being welcomed was spreading to other districts around Birmingham. More people felt less wary of those who didn’t look like them, with diversity becoming a theme across Birmingham.

One particular heart-warming story stars Tindal Street School. Ian Francis includes a black and white rugged picture taken of an ensemble of school children with a ball and an undeniable sense of team spirit.

The children are diverse, Black, White, Asian, male and female all together, joint, in a game of football.

We start to see snippets of togetherness, transforming Birmingham into a culturally diverse city we know and love today.

The children in the picture remember one fundamental thing: “a sense of togetherness.”

But an emotional uprising was not the only thing prominent for Asians in Birmingham, in 1968. 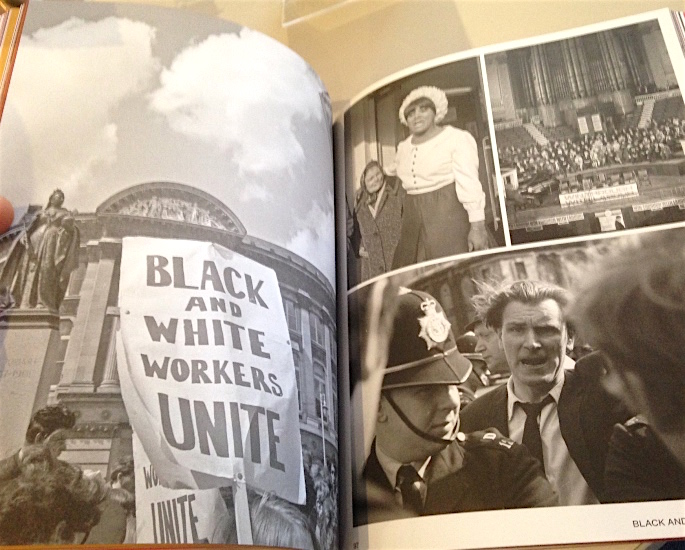 In a chapter called ‘Black And White Unite and Fight’- the only chapter containing a morsel of the colour black, we are shocked back into reality.

Racism is always attached to the past. It has always been the brunt of inequality, a deep core of unjustness running through the veins of any nation.

But this particular year saw Enoch Powell, an unashamed racist, give an infamous speech on Midland soil, ‘Rivers of Blood’. A chilling phrase, still haunting politics over 50 years later.

A testament of faith, humanity and growing sense of community blended not by skin colour but by morals.

Protests against Powell reinforced the concept, time and time again people will join together to fight for what they believe is to be right.

“(Regarding IWA) An important chapter in the struggle… for the generations born afterwards, they didn’t experience the cruel type of discrimination we experienced in the 50s and 60s.” – Avtar Singh Jouhl.

Tensions were already high, the year 1964 saw the Conservative MP Peter Griffiths swoop in and steal a seat from Labour, with a racist slogan to back him up.

In 1965, nine days before his murder, Malcolm X briefly visited Smethwick, on the invitation of Avtar Singh Jouhl.

Malcolm X acted as a catalyst to emphasise the racism still prevalent in Birmingham and British society. 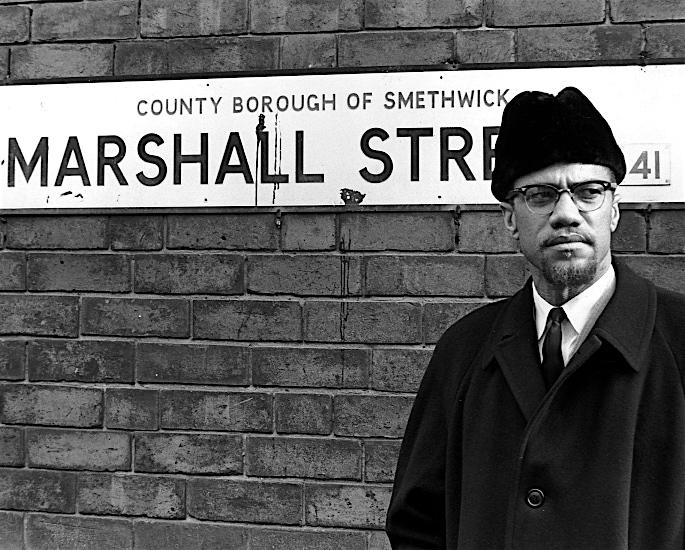 This momentous event, taking place on Marshall Street, resonated with the IWA and stirred many more activists for years to come.

On the 4 June, 2020 was the Black Lives Matter protest, situated in Victoria Square.

52 years prior, in 1968, on that very spot, was another demonstration, due to a small visitation from the Prime Minister at the time, Harold Wilson. He was greeted with an orchestra of ‘boos’.

Three years prior, in 1965, saw the Race Relations Bill – a misnomer. It failed to outlaw racial discrimination in areas that mattered, like housing and employment. This was enforced by the Labour party – Wilson’s party.

With both powerful parties – the Conservative Party and the Labour Party – not providing an ounce of help regarding the racial war, Asians took to the streets to voice their opinions. Something we have to thank them for.

They took arrests, with revolutions scattered across the Midlands. Avtar Singh Jouhl was arrested and cleared for refusing to vacant a Black Country Pub. The reason cited to leave was the colour of his skin.

If it was not for Ian Francis’s vibrant heritage project, pockets of fundamental history would cease to gain the attention it deserves. This book immortalises vital British Asian history.

People constantly find bliss amongst the madness. There is always a reason to sing. In-between the solemn colours of black, white and red, Francis organises a surprise.

A story by Abdullah Hussein, two yellow pages with purple text. A circle back home.

Cinema has the ability to distort reality. A portal back to a land you have never been to. It’s a siren, its music makes people crave nostalgia.

Sunday mornings saw clusters of Asians muddle their way to the local cinema, sometimes at the same time the sun rises.

No one was judged, it was a Sunday best of pyjamas and shalwars and hidden undercoats in the winter months.

What was the reward for rising so early? A Bollywood film in Hindi with songs in Punjabi and people gossiping in Urdu.

“You felt as if you had never left your country.”

A chance to feel homesick but to blame the tears on the plot. Jokes were created, a ritual to anticipate.

Ian Francis’s ‘This Way To The Revolution’ focuses on one year in Birmingham – 1968. But it focuses on everything. Every type of revolution scattered through the year had its place in the book.

He captured a year in the British Asian life fluently, recalling events to make tears brim to old memories.

Like life, Asians are only one part of the whole story. Whilst the book did not focus solely on the Asian experience, it willingly included the parts not visible anywhere else.

‘This Way To The Revolution’ is a quaint coffee table book with the power to transport you to a younger Birmingham, still steeped in history. But it includes a lifetime that should never be forgotten.