Bollywood legend Amitabh Bachchan will make a surprise appearance in Desi Rascals which airs tonight at 8pm on January 30 2015 on Sky Living.

Will he join the young and yummy lads for their beer banters at the local pub?

If you didn’t think Desi Rascals could get any better, wait till you see Bollywood legend Amitabh Bachchan’s surprise cameo in the fourth episode!

The fun-loving and drama-infused Desi Rascals will be graced with the actor’s presence in the next instalment, which will air on January 30, 2015 at 8pm on Sky Living.

Big B has been in London to promote his upcoming film Shamitabh with co-stars Dhanush and Akshara Haasan.

The suspense is already killing the audience as we wait to find out how the charismatic Bachchan is going to interact with the dynamic cast. 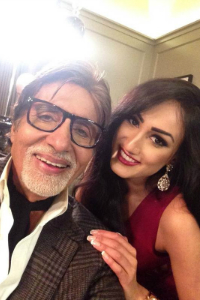 Will he join the young and yummy lads for their beer banters at the local pub?

Or will he sweat it out with the fitness-crazed Baig brothers and Uncle Russ at the gym?

Having sustained a blissful marriage with actress Jaya Bhaduri for over four decades, will Bachchan play the relationship guru for newlyweds Prakash and Shreena?

As traditions play a huge part in Asian family, will Bachchan throw in his two pennies’ for the Shah folks? All will be revealed in tonight’s episode.

With its unscripted drama, blunt exchanges and love triangles among the cast, the show’s appeal has penetrated the British Asian community. Viewers’ reaction has been passionate and prevalent on social media.

The acting superstar himself could not wait to take to Twitter to express his excitement about making a special appearance on the hit reality show.

T 1754 - " Tonight I make a special guest appearance on @Desi Rascals, 8pm on @SkyLivingHD #DesiRascals" …quite a unique concept .. !!

Bachchan has been seen around town in London and Dubai to promote his latest film, Shamitabh. Written and directed by R Balki, the Hindi film will be shown in UK cinemas from February 6, 2015.

Commenting on Shamitabh, Big B said: “It’s a story of two individuals who have different exceptional qualities and what happens when they come together. I give my voice to the character of Dhanush… an aspect of the film which was a first for me.”

The 72-year-old superstar enjoyed working with Balki and complimented the director’s creative approach. He said:

“Balki has a very intellectual, sensitive mind. He thinks differently and has always made stories that have not been the regular escapist fare that you see in Hindi cinema. 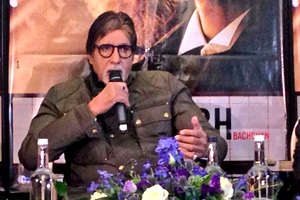 “And I can say with certain amount of confidence that this is a plot that has never been seen before at least in Indian cinema, even may be true for cinema worldwide.”

Bachchan has truly become a globally recognised name after his film debut in Hollywood film The Great Gatsby (2013).

Desi Rascals continues to deliver adrenaline-rushed entertainment, while unfolding the complexities of modern relationships. There is no better way to get to know such a huge and interesting ethnic community. The only way is Desi Rascals now.

Catch the legendary Amitabh Bachchan in the fourth episode of Desi Rascals on January 30, 2015 at 8pm on Sky Living.