Shahid Kapoor wished Ali Abbas Zafar a happy birthday and shared the first look from their film, leading the filmmaker to ‘scold’ him.

Shahid Kapoor was ‘scolded’ by Ali Abbas Zafar after he revealed the first look from their upcoming film.

It came when Shahid wished the filmmaker on his 40th birthday.

Taking to Instagram Stories, Shahid wrote a note and also revealed the first look from their upcoming film, believed to be Bloody Daddy.

The picture is seemingly from behind the scenes.

Shahid and Ali are seen standing side by side, looking at each other.

Ali reposted the Instagram Story and pointed out that Shahid had unveiled the look, sarcastically scolding him.

He wrote: “Thank you @shahidkapoor. You’ve revealed the look… #WellDone.” 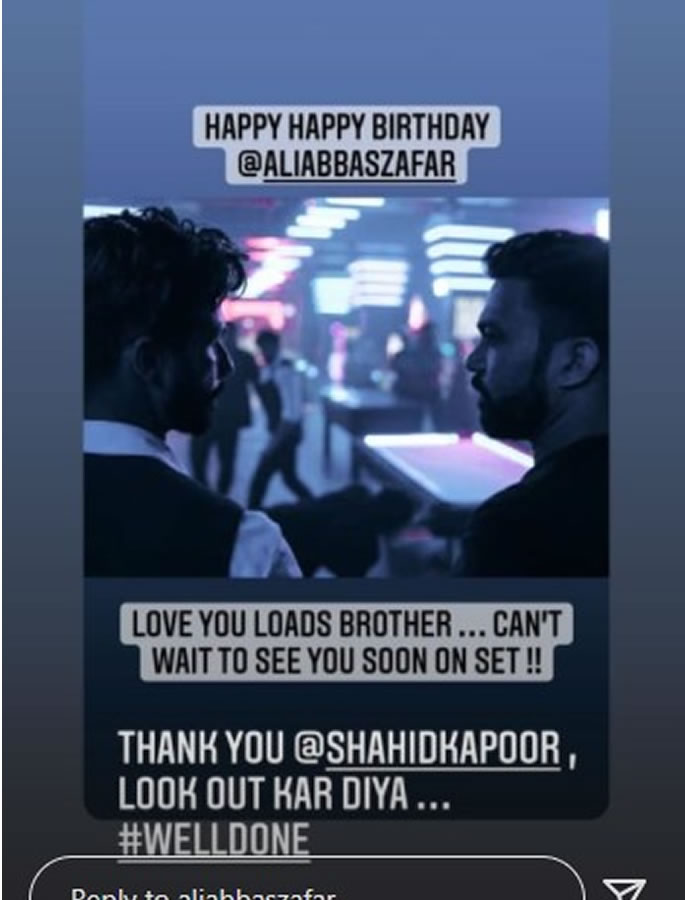 In November 2021, Shahid had begun shooting for the upcoming film.

The actor announced the news along with a picture of him and Ali.

He posted: “Day 1. Blood…Crime…And Lots of action. Here we go.. @aliabbaszafar better get your game face on…”

Ali Abbas Zafar had also shared the news and wrote:

“Let’s get this started @shahidkapoor are you ready for a crazy, quirky, mad ride of guns and gangs.”

The film, said to be Bloody Daddy, will mark their first collaboration and is expected to release in 2022.

According to reports, the film is believed to be an adaptation of the 2011 French film, Nuit Blanche.

The film has already been remade in Tamil and Telugu as Thoongaa Vanam and Cheekati Rajyam, respectively.

In addition to this project, Shahid will also star in the likes of Bull and Jersey.

Katrina Kaif shared a series of posts on her Instagram Stories.

The filmmaker replied: “Yes it’s my birthday, where is my gift?”

In another photo, Katrina said: “Sharing all my wisdom with you…”

He responded: “Fruit of knowledge should not be eaten.”

Katrina Kaif and Ali Abbas Zafar have worked on a number of films together.

It is reported that he will direct her in a solo superhero film.

Dhiren is a journalism graduate with a passion for gaming, watching films and sports. He also enjoys cooking from time to time. His motto is to “Live life one day at a time.”
Shamita Shetty Reveals her Marriage Plans
Deepika Padukone to Perform her Own Stunts in Pathan?