"We are so happy for Aishwarya mam and Leander sir to support this initiative of ours."

Aishwarya Rai Bachchan was the star attraction on October 20, 2018, when she announced the launch of the Tennis Premier League in Andheri, Mumbai.

Aishwarya posed on stage with Indian tennis icon Leander Paes to announce the launch of the league.

Paes is one of India’s most successful players and shows no signs of halting his career at the age of 45.

The former Miss World attended the event wearing a stylish black ensemble. Her outfit stood out with the added bling on her sleeves for that extra shine.

She complimented it with red lipstick, hair in soft curls and subtle make-up.

The Tennis Premier League (TPL) is the most recent example of when Bollywood and sports come together.

Many Bollywood stars have ownership stakes in sports franchises.

Having Aishwarya at the TPL launch event will increase the popularity of the league before it even starts.

Rai’s appearance received much fanfare at the Celebration Sports Club, which was hosted by TV actor Gunjan Utreja.

Celebrities who attended the event include Omkara (2006) director Vishal Bhardwaj.

Other celebrities at the TPL launch were from the television and film industry.

The TPL is an initiative founded by Mrunal Jain and Kunal Thakur to provide a platform for tennis players all over the country to come and compete with each other. 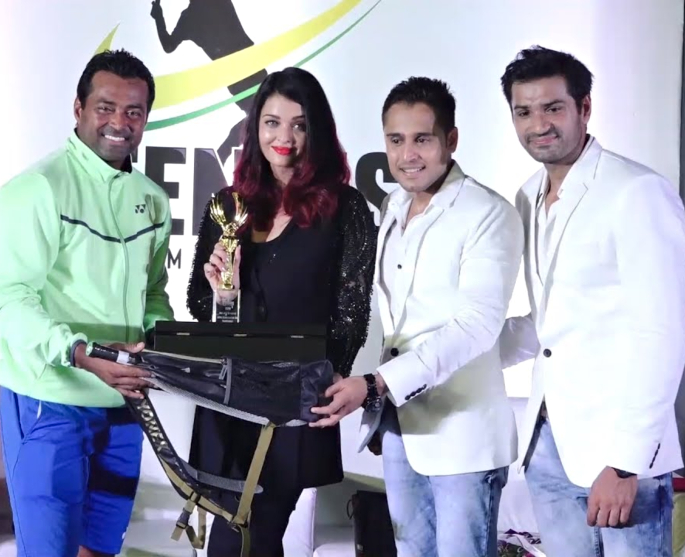 There will six teams of 22 players each. All of the teams will be led by successful television actors.

Kunal is the founder of KTTFA, one of Mumbai’s best tennis academies. Mrunal is contributing to the business side of it.

Both founders of the TPL were extremely grateful for Aishwarya and Leander supporting the event.

Kunal said: “We are so happy for Aishwarya mam and Leander sir to support this initiative of ours.”

“They spared time from their busy schedules to support children and our wheelchair players which was great motivation for them.”

Leander Paes shared his thoughts on the league, he said:

Aishwarya, who was last seen in Fanney Khan (2018), has commented on the recent #MeToo movement.

She refused to share her thoughts on Bollywood personalities such as Sajid Khan, Vikas Bahl and Anu Malik being named as survivors.