"You have to stop buying into the idea that a particular shade is better than others."

His series of Facebook posts began on Wednesday 12th April 2017.

The rant not only focused on the multitude of skin lightening cream products sold in India. Abhay Deol also targeted several Bollywood celebrities who have promoted them in the past.

He called out top names such as Deepika Padukone, John Abraham, Sonam Kapoor and even Shahrukh Khan himself.

But what prompted the actor’s outburst?

It follows accusations against prominent politician Tarun Vijay. Reports claim he made derogatory remarks against the colour of South Indian’s skin.

On each Facebook post, Abhay Deol posted pictures of skin lightening cream advertisement, featuring Bollywood celebrities. He made sarcastic comments on each picture, calling out Bollywood’s obsession with fair skin and its denial of such obsession.

In one post, Deol said: “There’s a lot more of these campaigns that are blatantly, and sometimes subtly, selling you the idea that whiter skin is better than darker skin.

“No one at the top of their game in any field is going to tell you that it is demeaning, false, and racist.

“You have to see that for yourself. You have to stop buying into the idea that a particular shade is better than others. Unfortunately if you look at matrimonial ads you will see how entrenched in our psyche this belief is.

“We even use the word ‘dusk’ to describe the colour of someones skin! While an individual may not be able to change this attitude in his/her community, he/she can at least start with the family. [sic]”

As if Abhay Deol had not already drawn attention to the issue, fellow star Sonam Kapoor tweeted a response to him. Her tweet featured an image of a skin lightening cream advertised by Esha Deol, Abhay’s sister.

She tweeted to the actor: 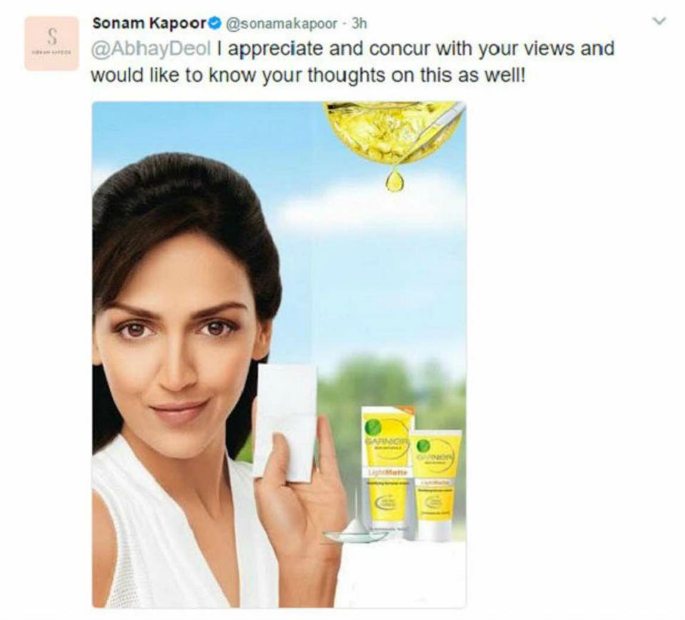 Sonam Kapoor swiftly responded. Referring to her own advertising campaign, she tweeted: 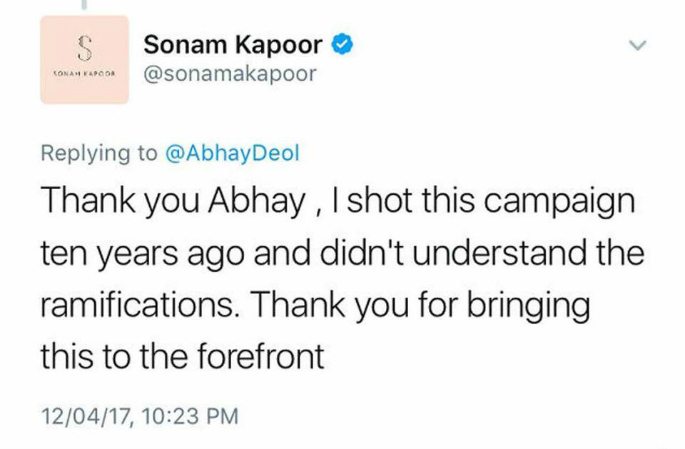 Deol replied: “More power to you Sonam maybe you can use your power as well to take this further than the forefront.”

However, Sonam Kapoor has since deleted her tweets with no explanation as to why.

As Abhay Deol remains defiant in his rant, it seems the debate over skin lightening creams and their effects on Indian society will surely continue.

Images Courtesy of Abhay Deol's Facebook page and Being Indian