1947 Partition resonates in Line of Blood by Balraj Khanna

Balraj Khanna’s latest novel, Line of Blood, retells the Partition of 1947 India. An emotional tale, the acclaimed artist and author tells us more.

"The story is of friendship and fear, of love and optimism as told in the book"

British Indian author Balraj Khanna returns with a compelling new novel, Line of Blood, to commemorate the 70th anniversary of the Independence of India.

The novel is set in the fictional town of “Puranapur”, a nostalgic nod to the communal harmony that existed among all faiths. Line of Blood offers a tender retelling of life before and after Partition.

It follows Jyoti Prasad and his family who live in the peaceful Punjabi village. A miller with a brother in politics, Jyoti holds good standing and the respect of the community.

Yet, amidst their seemingly idyllic lifestyle, accounts of tragic murders taking place on the outskirts of the village disturb the peace. Fear spreads among the villagers and mistrust between Hindus, Sikhs and Muslims intensify.

It is left to Jyoti and his brother Bhagwan to attempt to calm the tensions. But the approaching announcement of Partition and the creation of Pakistan makes this virtually impossible.

In a special Gupshup with DESIblitz, the renowned artist and author Balraj Khanna reveals why he opted to write a book on such an agonising period in Indian history:

“Even though I was only seven, the brutality and the awesomeness [of] the seismic events of August 1947 in the Punjab where we lived at the time, left an indelible impression on me.

“I said to myself then that when I grew up, I would write a book about it all one day. This thought had been living with me, fresh as ever, for all these decades,” Balraj tells us.

Balraj actually wrote his first draft as early as 1985. Since then, the story developed and eventually transformed into Line of Blood. The book is a mix of Khanna’s own personal experiences and later research into the history and politics of 1947.

The narrative is told through the eyes and hearts of these ordinary villagers of Puranapur, who have found themselves caught up in the political storm that eventually leads to the division of their homeland. 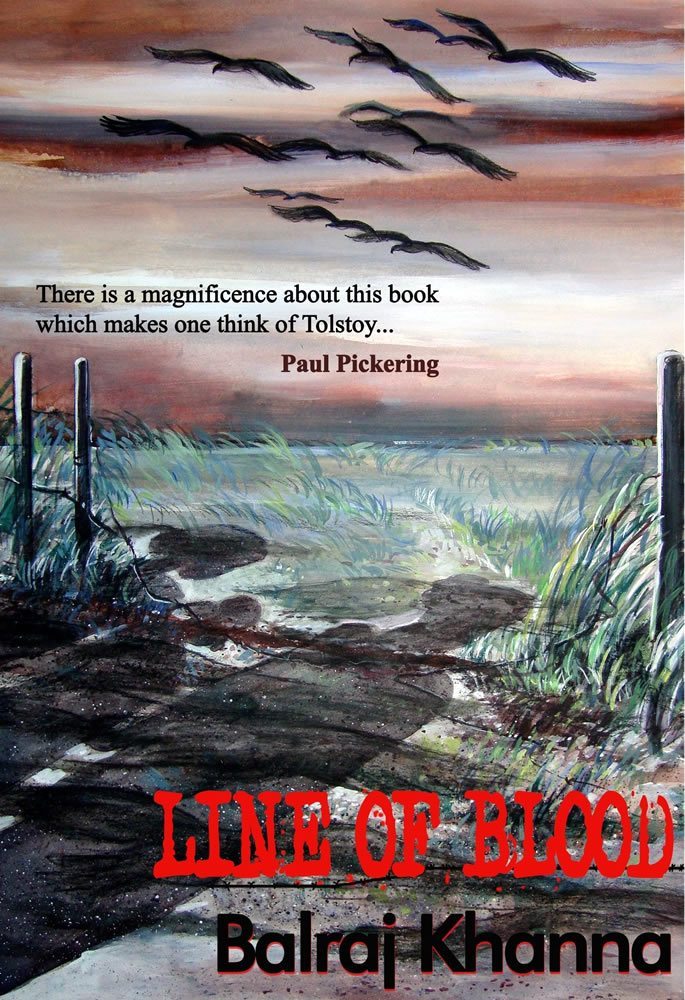 There is a keen sense of fear and uncertainty that follows Jyoti and the rest of the community in Line of Blood. Each faction worries for their own, while the rising number of incidents causes many to simply move away to safer climes.

In particular, Jyoti and his family suffer many sleepless nights wondering where the border line will fall. Will India remain their homeland, or will it become the, as of yet, alien and unknown Pakistan?

Jyoti and his companions regularly hear of the never-ending quarrels of political leaders Mahatma Gandhi, Jawaharlal Nehru, Muhammad Ali Jinnah, and Lord Mountbatten, who rule the destinies of Indian citizens from afar.

His best friends Mohammad and Aziz are both Muslim. Yet, they both detest the idea of Partition and a separate state. While the story is arguably told from a Hindu/Sikh perspective, Khanna reveals more about his own childhood:

“We lived in the small, largely Muslim town of Qadian, ten miles from what became the border between the two new countries.

“As the Punjab became the Great Slaughter House, we lived in unbearable fear of our lives – day and night. It was a question of ‘any time’, when the axe or bomb would fall upon our heads, blowing us to pieces.

“But my father, an SDO and thus an important government officer, had many close Muslim friends. It is thanks to them that we were spared that fate.”

Balraj expertly captures the continued feeling of unease that passes through the village and particularly across Punjab. He tells DESIblitz:

“It is mostly fiction but based on virtual reality – historical, political and social. This is how things were then.”

Today, while we celebrate India’s freedom from the shackles of the British Empire that took place in 1947, the harsh reality of the violent split of India still haunts many South Asians.

Those who experienced Partition themselves speak of the chaos, incomprehensible violence, and loss of life that ensued. But as Balraj explains:

“The story is of friendship and fear, of love and optimism as told in the book. And the characters, most of them, are based on real people – my family members and the family friends.”

“2017, marking the 70th year of Indian Partition, and India’s and Pakistan’s independence, seemed the right time for it [Line of Blood] to find an expression in print.”

Balraj Khanna’s Line of Blood is an interesting and personal story. The novel is available to purchase from Amazon now.

Aisha is an editor and a creative writer. Her passions include music, theatre, art and reading. Her motto is “Life is too short, so eat dessert first!”
Top 7 Indian Horror Authors to be Read
DESIblitz presents Asian Literature at Birmingham Literature Festival 2017