16 sentenced to Death for Murder of Nusrat Jahan Rafi

The high profile murder case of Nusrat Jahan Rafi came to a swift conclusion when 16 people were found guilty and sentenced to death in Bangladesh.

"I still feel the pain my daughter went through."

On Thursday, October 24, 2019, a court in the city of Feni, Bangladesh, sentenced 16 people to death after they were found guilty of murdering Nusrat Jahan Rafi.

They killed her after she refused to drop a sexual harassment case against the principal of Sonagazi Islamia Fazil (Degree) Madrasa.

On April 6, 2019, 18-year-old Nusrat was set on fire ten days after her family filed a police case against SM Sirajuddaula.

Nusrat suffered 80% burns and died four days later. This led to widespread protests demanding justice for the teenager, which led to action being taken.

The verdict was delivered after sixty-one days of court proceedings, one of the quickest in Bangladesh’s recent history.

All 16 suspects were found guilty and were sentenced to death. Judge Mamunur Rashid also fined them Tk 1 Lakh (£910) each. The money was to be handed to parents of Nusrat.

According to statements by the suspects and the police, Popy had convinced Nusrat Jahan Rafi to go with him at the rooftop of the institution after an exam.

Three other classmates were waiting for Nusrat and pinned her down while kerosene was poured on her and set alight. They had been wearing burqas and gloves at the time.

Sirajuddaula was prison after he was arrested for alleged sexual harassment against Nusrat. Investigators stated he ordered his accomplices to kill her.

Not only did Nusrat inform the police about the sexual harassment but she also wrote about it in her exercise book.

The attack was meant to appear like a suicide but Nusrat Jahan Rafi was able to escape and get help from other classmates.

While undergoing treatment, she told officers about the attack. She adamantly told officers: “I will fight till my last breath.”

When the verdict was announced, some of the convicts broke down in tears, while others shouted that they had been denied justice. 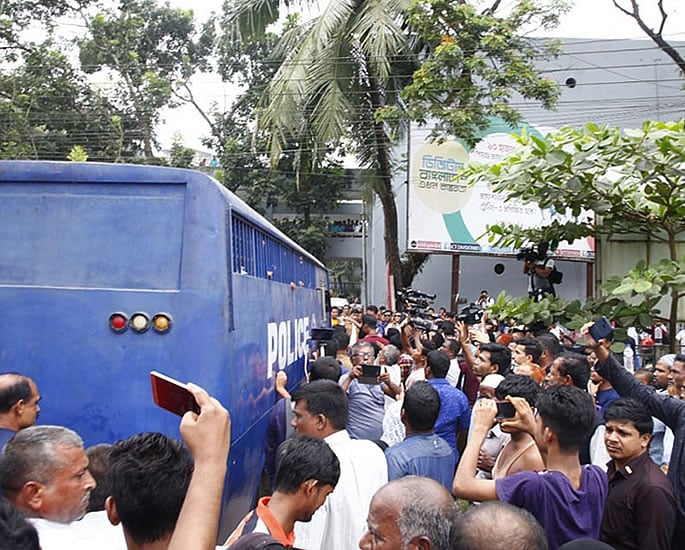 Mr Noman was happy to see there was justice for his sister. He said:

“They murdered my sister. Now they have to face the consequences.”

He added that his family now wants to see their sentence carried out quickly. The brothers also thanked Prime Minister Sheikh Hasina for ensuring justice for Nusrat and her family.

Despite giving thanks for getting justice, the family sought police protection in case of possible reprisals.

Since the first case against Sirajuddaula was filed, they explained that they had received threats. Mahmudal said:

“I was threatened over the phone from an unknown number on Friday. Earlier in the morning, my mother was also threatened.”

He added that on the day of the hearing, he discovered that the cable connection was cut when they returned home.

“I cannot forget her even for a moment. I still feel the pain my daughter went through.”

Prosecutors in the case were happy with the outcome. Lead prosecutor Hafez Ahmed stated:

“The verdict proves that no one is above the law and can get away with murder in Bangladesh. It’s an achievement for the judiciary.”

He went on to explain that defence lawyers unsuccessfully attempted to establish that Nusrat’s death was suicide.

But the defence lawyers claimed that their clients were denied justice and will challenge the verdict at the High Court.

Mr Ahmed and the family’s lawyer M Shahjahan Saju were both hopeful that the High Court will reject the appeal and that capital punishment for the convicts will remain.

It was heard that the convicts are eligible to make an appeal within seven working days.

Sonagazi Police initially investigated the case but it was transferred to the Police Bureau of Investigation (PBI) after they were accused of being negligent in addressing the issue.

Deputy Inspector General Banaz Kumar Majumder was happy with the sentence and said:

“We established in paper every truth our investigation uncovered. We felt that all the accused are equally guilty.

“We are happy that our expectations have been reflected in the verdict.”

In a statement, Prime Minister Hasina and Home Minister Asaduzzaman Khan Kamal thanked the PBI for investigating the case and charging the 16 quickly.

Dhiren is a journalism graduate with a passion for gaming, watching films and sports. He also enjoys cooking from time to time. His motto is to “Live life one day at a time.”
Indian Man killed Elder Brother suspecting Affair with Wife
Luton Man pleads guilty of Honour Killing after 18 Years