Cinema can be an effective medium to convey powerful messages. DESIblitz presents 10 top Pakistani films with a strong message.

Cinema plays a great role in bringing a change in society. The 21st century has seen a positive change, with Pakistani films conveying a powerful in them.

Since 2007, filmmakers have made Pakistani films with different storylines, which showcase stimulating content.

Pakistan films clearly moved on from the typical Gandasa (iconic weaponry stick) culture, with some based on true stories or events.

These Pakistan films featuring A-list stars and fresh talent have generally been appreciated and recognised by critics and fans.

Filmmaker Shoaib Mansoor has had a pivotal role in starting a trend of making thought-provoking Pakistani films. This has resulted in the revival of Pakistani cinema.

We explore in detail 10 Best Pakistani films, which present a powerful message: 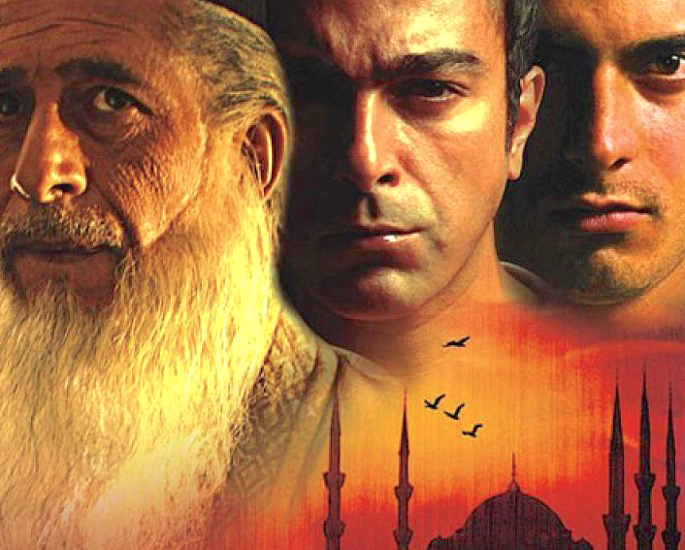 The film shows how the lives of Mansoor and Sarmad change, following the aftermath of the  9/11 incident in America.

Iman Ali (Maryam) plays a British Pakistani girl with western values. Meanwhile, Naseeruddin Shah has a special appearance as Maulana Wali, highlighting how faith is being put to wrong use.

Khuda Kay Liye touches upon a wide range of issues. These include radicalisation, racial discrimination, gender bias and unfair treatment.

The most important message of Khuda Kay Liye is how leaders use manipulation tactics. These include a leader of a small jihadi group and influential international leader.

All these leaders and personalities manipulate young minds, burdening society with hatred and vengeance. Khuda Kay Liye is a very unique film from Pakistan. 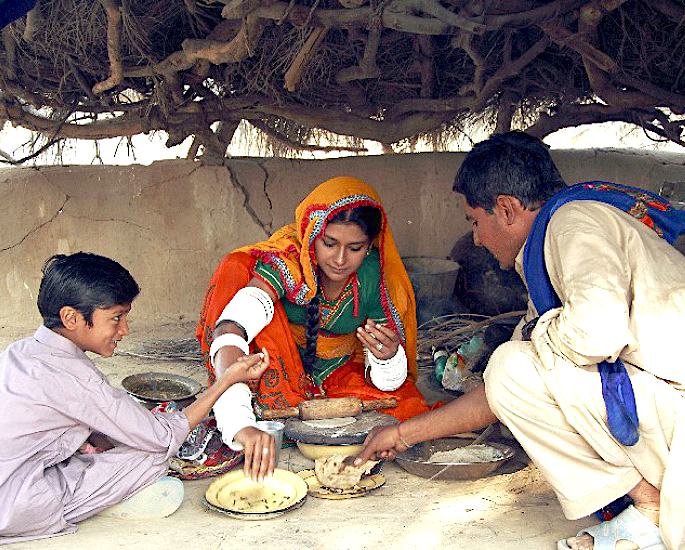 The directorial debut of Mehreen Jabbar, Ramchand Pakistani is a drama film adaptation of a true story.

Indian officials mistake the father-son duo as spies. Thus, the two have to face an Indian prison for a long time. They both undergo many trials, following their arrest.

Left behind is Shankar’s wife Champa (Nandita Das) who feels very empty inside. The story shows the impact of the family splitting up, amidst the conflict between India and Pakistan.

The film is realistic and not made for commercial purposes.

Ramchand Pakistani portrays the real-life struggles and traumas faced by prisoners on either side of the border. The film also reflects on how citizens can be ignorant of these primitive issues. 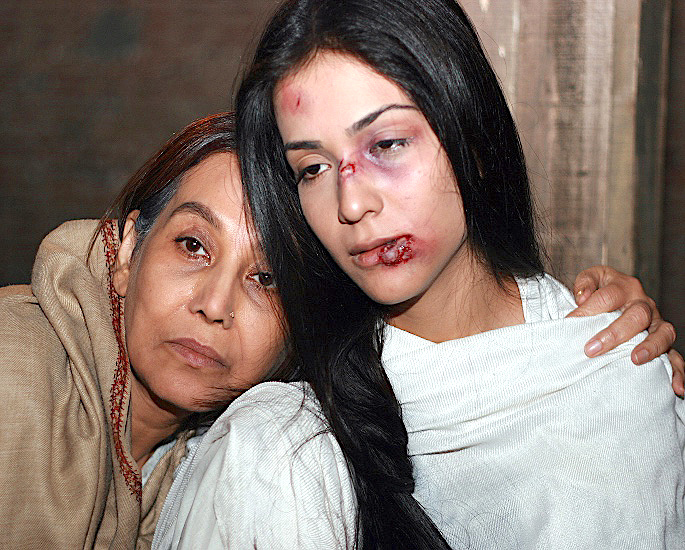 Bol is a social drama that portraying the harsh realities of Pakistani society.

Their father, Hakim Sahib (Manzar Sehbai) who is desperate to have a son, has an intersex child, Syed Saifullah ‘Saifi” Khan (Amr Kashmiri).

With Saifi becoming a victim of rape, Hakim Sahib eventually kills him using a plastic bag to suffocate him.

As the women of the house have an unpleasant life, Ayesha marries Mustafa, making Hakim Sahib feel furious and helpless.

Hakim Sahib and Meena have a baby girl. Zainab saves the newborn’s life from Hakim Sahib who wants to kill her as he feels that she will have a horrible future.

However, Zainab comes to the rescue and kills her own father. Before facing death, Zainab has a strong message as she poses two comparative questions:

“Why is only killing a sin? Why is giving birth, without any family planning, not a sin?

With Shoaib Mansoor introducing new faces and fresh content, Bol had a major contribution to the revival of Pakistani cinema. 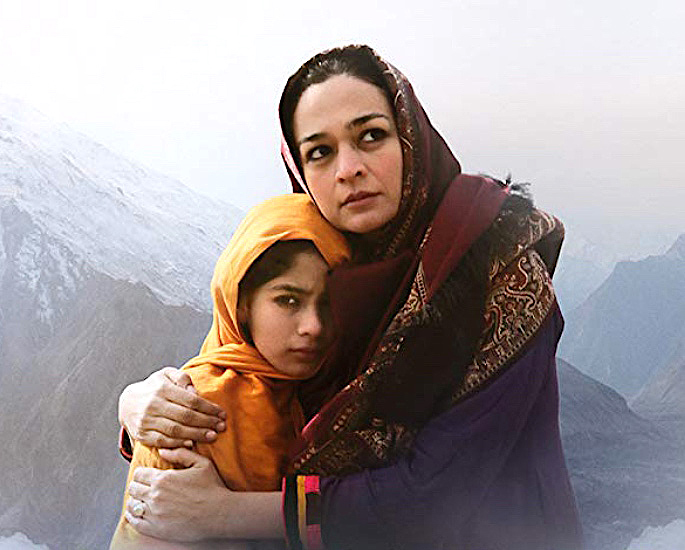 The drama-thriller Dukhtar subjects the daughters of Pakistan whose voices are dim.

The film shows how 15-year-old Allah Rakahi (Samiya Mumtaz) marries tribal chief Daulat Khan (Asif Khan). She has to leave her family in Lahore and start a new life in Pakistan’s northern areas.

Not wanting her daughter to face a similar fate, Allah Rakahi and Zainab run away.

When the two flee they meet a truck driver Sohail (Mohib Mirza). Sohail faces potential danger when trying to transport the mother and daughter to safety.

The bond of Allah Rakahi and Zainab is visible in the movie. Dukhtar portrays the sad side of Pakistani society where child marriages go ahead with tribal traditions not being so women-friendly.

This movie highlight the struggle of a mother to protect her child from the outdated norms. 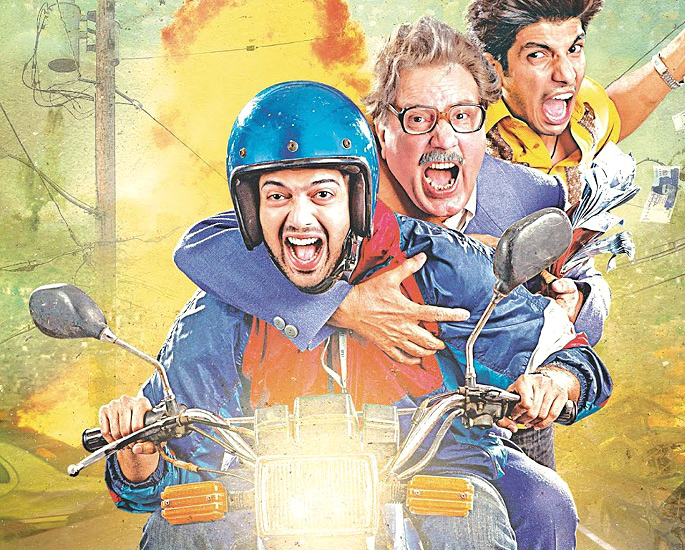 Karachi was the host for the shoot of comedy-thriller, Na Maloom Afraad.

The film primarily focuses on the issues faced by the people of Karachi. The name Na Maloom Afraad symbolises terror and jeopardy.

The film is a case for unknown influential political personalities of Karachi. The movie shows the disorganisation of the system and society in Pakistan.

Hence, the film represents the personal goals of Farhan, Moon and Shakeel. The three try to outsmart the system as it does not do them any good. 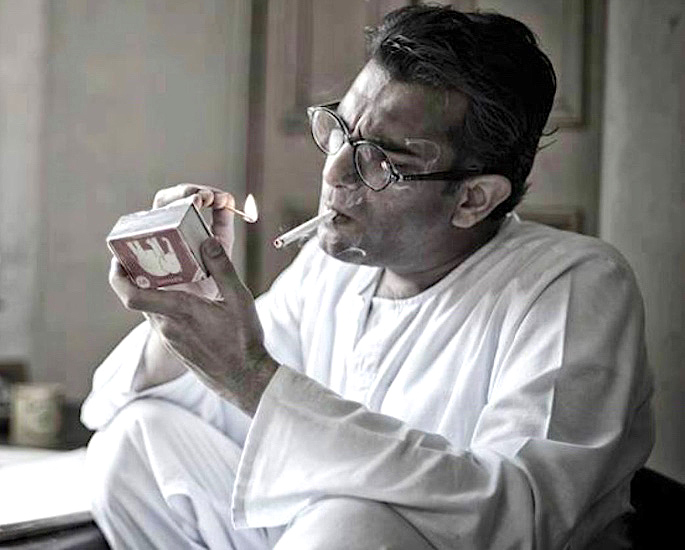 The biographical film Manto is a direction of Sarmad Khoosat. This masterpiece movies which has a stark tone sees Sarmad also play the title role of Manto.

The film is about the personal life of eminent writer Saadat Hasan Manto. The film depicts the resilience of Manto. Despite backlash from his own people, he continues to powerfully write.

The film registers flaws in the system, which had become widespread in society. But the people and the system itself judge Manto.

An IMDb user reviewing the film describes it as “the naked truth, that needs to be shown to the world.”

“With an interestingly intricate premise, ‘Manto’ depicts the life of an accomplished writer of the subcontinent.

“The movie clearly rests on the shoulders of supremely talented Sarmad, who eloquently plays Manto.” 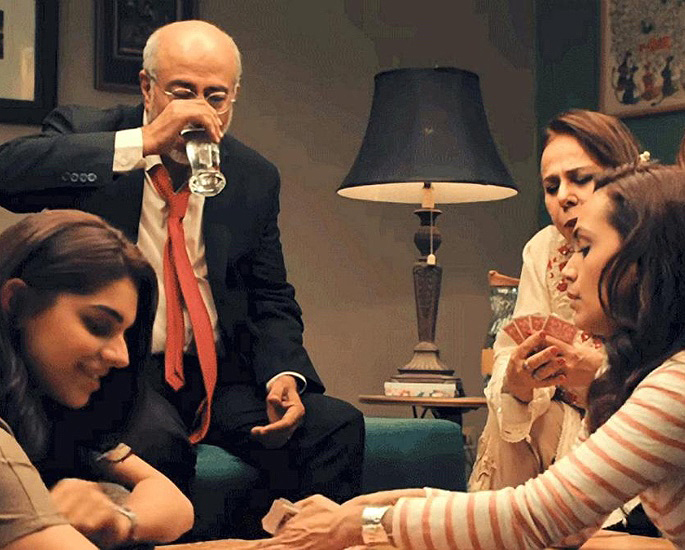 The comedy-drama Cake is a film, which became very popular with audiences worldwide. The title of the movie, Cake has a strong connection with the storyline and plot.

The film observes the values of the family system in the sub-continent. It also highlights that though the family is important, it can be disloyal.

Despite any conflicts or disagreements, the film depicts the importance of family and relationships.

Cake reassures the cultural values of Pakistan and if they are not interpreted correctly or sensibly, they can be harmful.

Zareen (Aamina Sheikh) and Zara (Sanam Saeed) play the lead characters in the film. Adnan Malik made his debut in the film, portraying the role of Romeo.

The film was also the directorial debut of the inspiring Asim Abbasi. 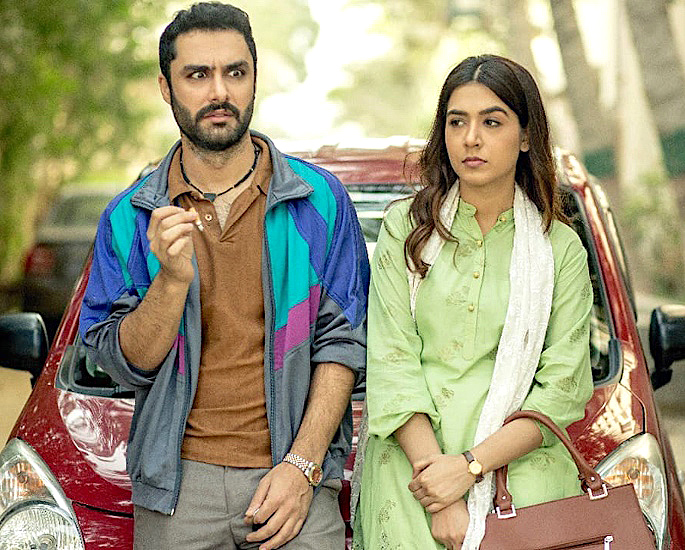 Laal Kabootar is an action film about crimes in Karachi, with plenty of thrilling moments.

The film follows a single woman Aliyah Malik (Manza Pasha) who has to fight the justice and social system, after the brutal murder of her husband, Noman Malik (Ali Kazmi).

The film holds a strong message about the corruption and hidden face of society. Cab driver Adeel (Ahmed Ali Akbar) and Inspector Ibrahim (Rashid Farooqui) are the other key characters in the film.

Complimenting the actors, direction and cinematography, along with the film being a boost for Pakistani cinema, Rahul Aijaz from The Express Tribune wrote:

“Akbar and Pasha make a formidable on-screen pair. Khan, on the other hand, oversees the project to perfection and let the film breathe on its own.

“Stunningly shot by acclaimed cinematographer Mo Azmi, the film shows how camera can play an active ‘character’ in the film.”

“Laal Kabootar will make you regain your faith in Pakistani cinema.”

Laal Kabootar was Pakistan’s official entry for the 92nd Oscars. 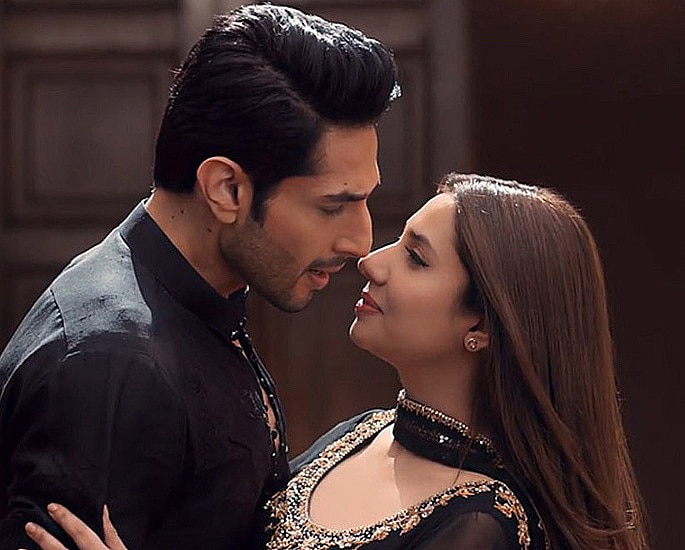 Superstar is a commercial film, falling under the romantic-musical genre. The plot of the film revolves around the ambitious Noor (Mahira Khan), a theatre actor who wants to reach the top of her career.

The film shows the difficulties that women face when entering the field of showbusiness. Superstar focuses particularly on how society can treat women as an object and not appreciate their abilities.

At the end of the film, the determination of Noor outshines her competitors and fellow misogynists.

The film explores themes of romance and betrayal. But the strongest message the film conveys is to fight for your love.

Speaking about the message behind the film, actor Bilal Ashraf who plays the role of Sameer Khan says:

“If you do love someone, go out there and get that someone. I would give up everything up for love.

“But I don’t think the person who loves me would ask me to give up everything I love though. It isn’t love if that person asks you to do that.”

Veteran actor Nadeem Baig portrays Agha Jaan who runs a theatre and is the uncle of Noor. 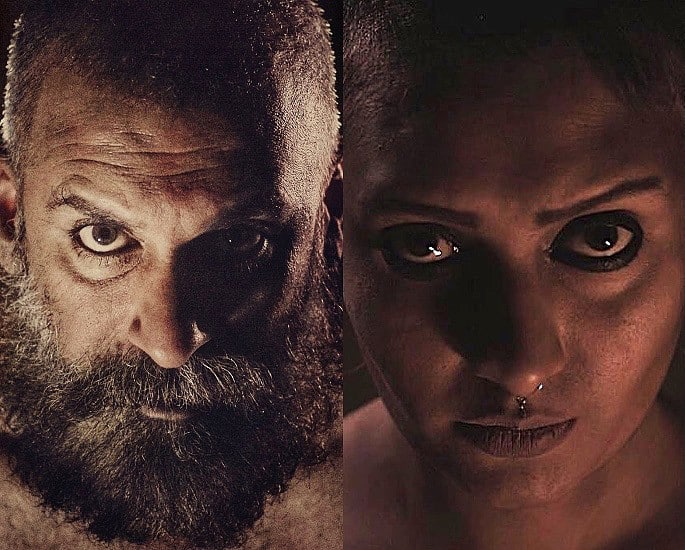 The mystery thriller Durj is a real-life story of two brothers in southern Punjab. Durj shows a family that engages in the Cannibalism. The story is frightening and very real.

Playing the brothers, the two lead characters of the film are Gul Baksh (Shamoon Abbasi) and Laali (Sherry Shah).

Durj was briefly banned by the Censor board of Pakistan, with it portraying the real face of society.

The most powerful message of the film is about poverty and social relations.

Shamoon Abbasi who is also the director of the film took inspiration from true events and states that Drurj is not just about cannibalism:

“Durj’s plot does not just revolve around cannibalism, it is about a cannibal but we have multiple stories. There are three stories which merge into one.”

Shamoon and his team undertook extensive research for the film, collecting data from different cases.

The above Pakistani films certainly indicate that Pakistan filmmakers being braver with the stories they tell.

There are also many more opportunities through which social reforms and messages can be sent to the masses. It’s not just about availing the right opportunity but also creating one.

Pakistani filmmakers can continually attract an international audience by being bold, taking a particular message to the next level.

They can do so by representing the realistic culture and social practices that are prevalent in Pakistan.  By focusing on more social issues, Pakistani films will further contribute to the revival of cinema.

Similar to dramas, filmmakers have proved that they can produce Pakistani films of the highest quality. Hopefully, this trend will carry on throughout future decades.

Z. F. Hassan is an independent writer. He enjoys reading and writing on history, philosophy, art, and technology. His motto is “Live your life or someone else will live it”.
Kalki Koechlin reveals Casting Couch & Sex Abuse Horrors
Director explains Why ‘Meray Paas Tum Ho’ is a Big Hit