When looking for a hob cooker for your new kitchen, it is important that you find one that is right for you. Here are 10 to check out.

it is quick to fire up and easy to manage.

When renovating a kitchen, it is important to think about what oven and hob cooker you want.

Having a good hob will be the go-to for mealtimes.

There are a few different designs to choose from. This includes the innovative induction, the responsiveness gas and the effective ceramic, or electric, hob.

Other factors to consider include the features that the hobs offer such as the number of burners and other technology.

So it is important to choose wisely in order to avoid any regrets.

To help you choose the perfect hob to go with your oven, here are 10 of the best hob cookers to check out. 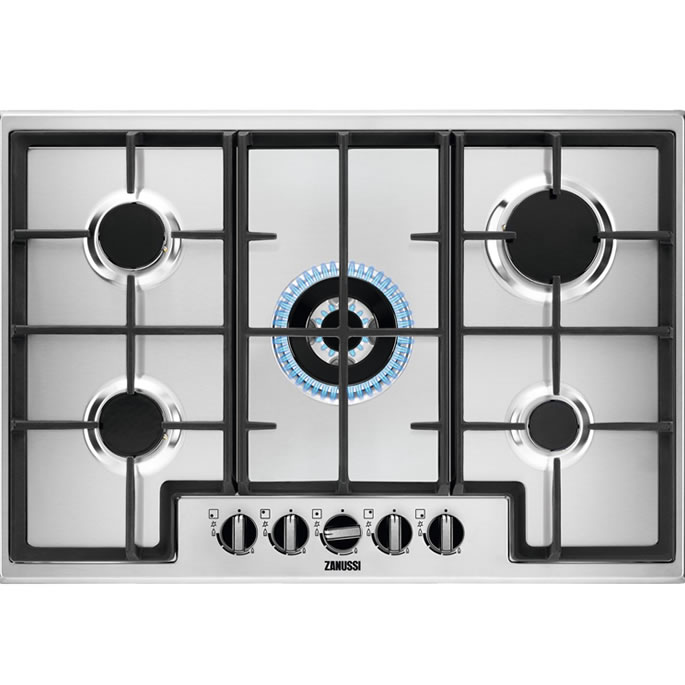 Not only does this traditional stainless steel gas hob look the part but it also offers a lot.

With five burners, you can steam, boil and fry all at once.

As it is a gas hob cooker, it is quick to fire up and easy to manage. This means you should not have too much difficulty when it comes to cooking with it.

The central burner is a wok burner which is great if you prefer cooking specific dishes. It also provides some extra support when creating some delicious dishes.

This hob features simple dial controls so there is no need to worry about fumbling with touch controls.

It also offers cast iron pan supports, providing extra stability when using them on the cooktop. 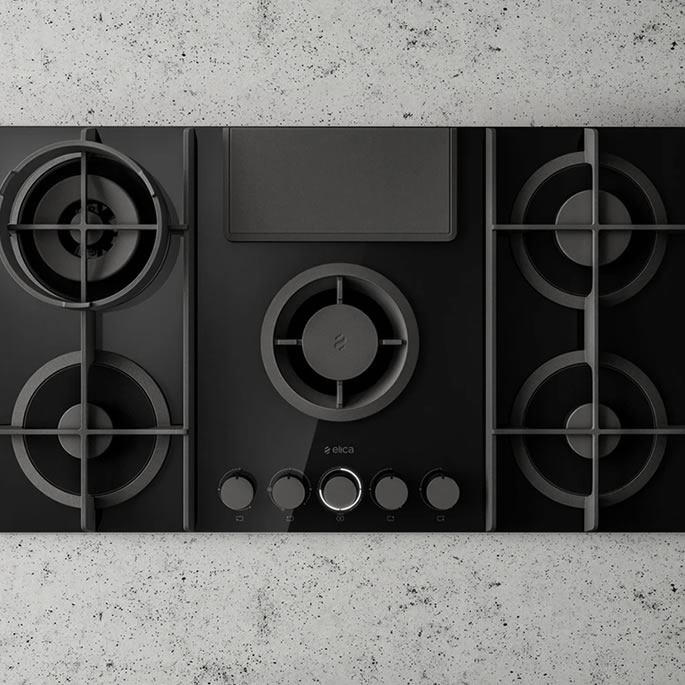 This could be an option for your new kitchen if you’re willing to part with a hefty sum of cash.

Costing around £1,700, it may seem like a lot of money, but the features may make the Elica Nikola Tesla worth it.

One of the standout features of this gas hob is that it comes with built-in extraction.

This means you can continue to cook with gas whilst ridding the home of any lingering food smells.

The design of the hob makes for more intense cooking as well as high-speed fume extraction.

The dials at the front of the hob control the burners and the extraction.

It has a stunning design which might be enticing. Constructed using cast iron with a glass top hob, it is simple to clean, ensuring that it looks great in the kitchen for years to come. 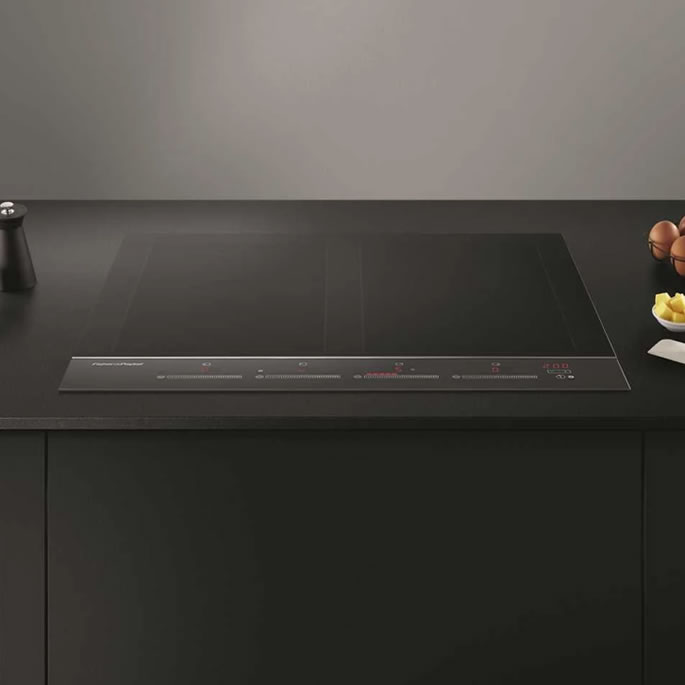 For those who prefer a hob that is not gas-powered, one of the best induction hobs is the Fisher & Paykel CI604DTB3.

This induction hob has SmartZone, which combines two cooking zones and controls them as one. It is an effective way of providing you with the flexibility of using large pans and griddles.

Enhanced features such as PowerBoost and GentleHeat are helpful for specialist cooking tasks such as melting chocolate.

These features deliver either a very high or very low heat.

Another helpful feature is the integrated timer to keep timings in check and the TouchSlide controls react immediately when adjusting the temperature.

Costing around £650, this hob cooker is one to consider if you’re looking for flexibility when it comes to cooking. 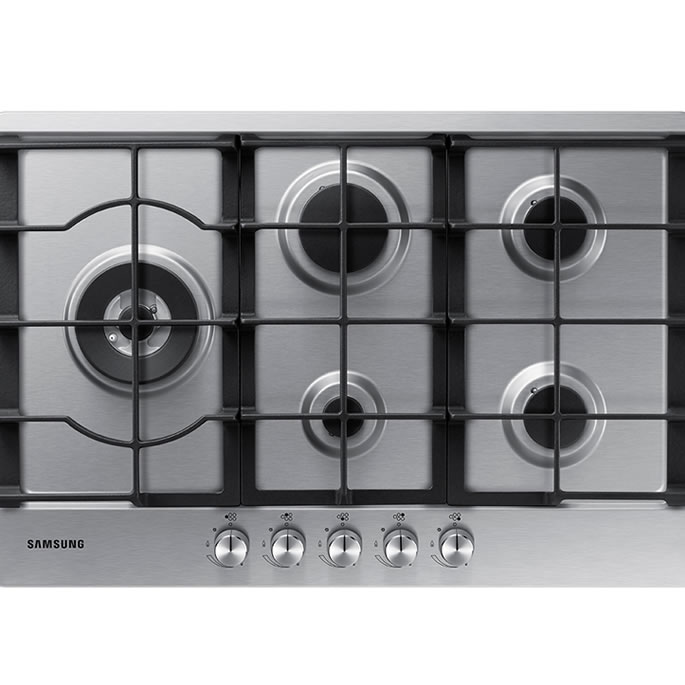 If you’re looking for a hob cooker made by Samsung, this multi-functional option is among one of the smartest options to buy.

Designed with easy-control knobs, you have access to five different burners as well as an automatic ignition function.

This means there are no unnecessary delays when it comes to cooking.

The cast iron pan support ensures that pots and pans remain sturdy and are unlikely to wobble when cooking.

For extra safety, there is a flame failure cutoff, making sure that the gas flow is cut off if the flame goes out.

Those who enjoy a stirfry can use the wok burner with a triple ring, making this form of cooking more precise.

This hob can even be controlled with the Samsung SmartThings app. 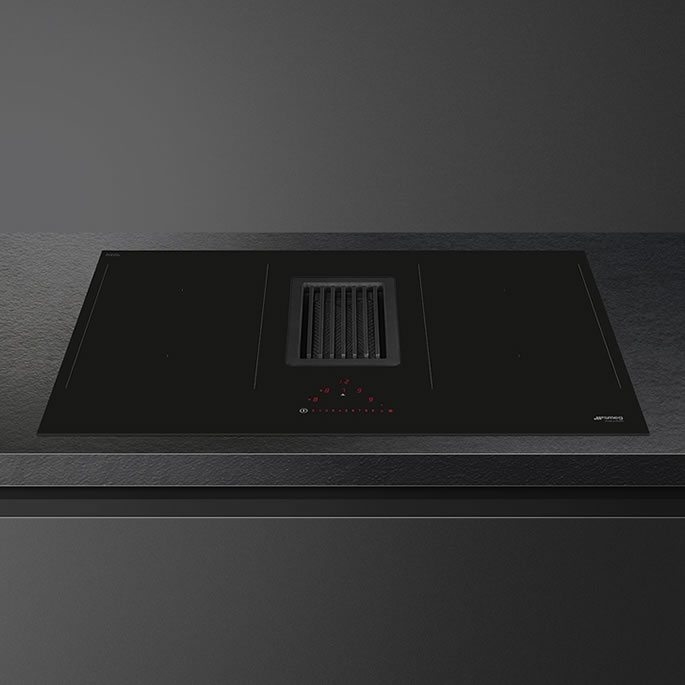 Another induction hob cooker to think about for your new kitchen is the Smeg HOBD4.

It is a stylish appliance with features that are designed to make cooking quicker and easier.

In the middle is an extraction system that removes all steam and vapours immediately through its robust cast iron grid.

Thanks to its design, pans can be smoothly transferred across the hob, allowing for complete cooking freedom.

This hob has an innovative single red LED slider control that allows for seamless control of all four flexible zones with the swipe of a finger.

It also features Smart Auto Pot Detector which automatically recognises and activates controls when a pot is placed on it.

This allows users to concentrate on the cooking. 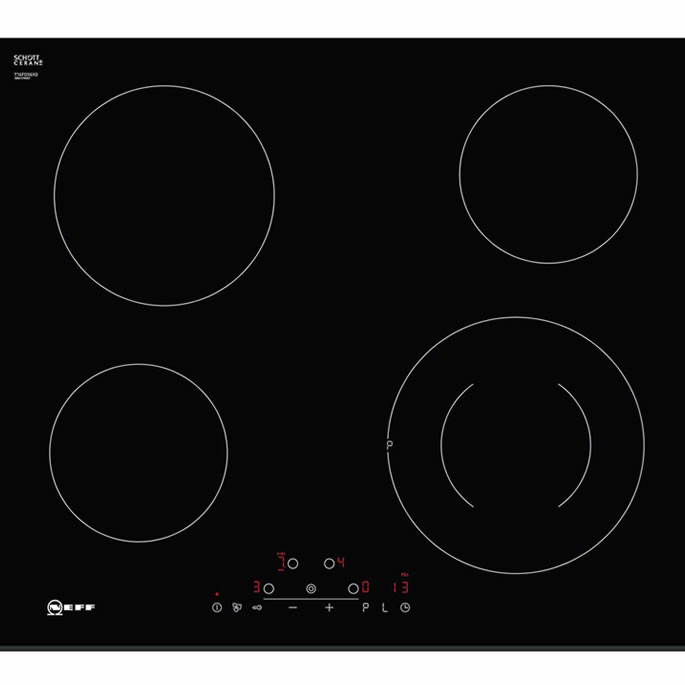 One of the best ceramic hobs for the kitchen is the Neff T16FD56X0.

It is easy to use and it comes with four cooking zones, each with 17-stage variable power settings so you can cook at the desired rate.

Each zone also has a timer with an automatic shut off.

For a little boost, activate PowerBoost to apply some extra heat to the zone for 30 seconds.

Like other modern hobs, this one comes with a touch control panel.

It is easy to use and you can use it to control the temperature, set the timer or switch on the ‘keep warm’ feature.

At around £379, this is a viable option to go for if you’re looking for an effective hob cooker that will not break the bank. 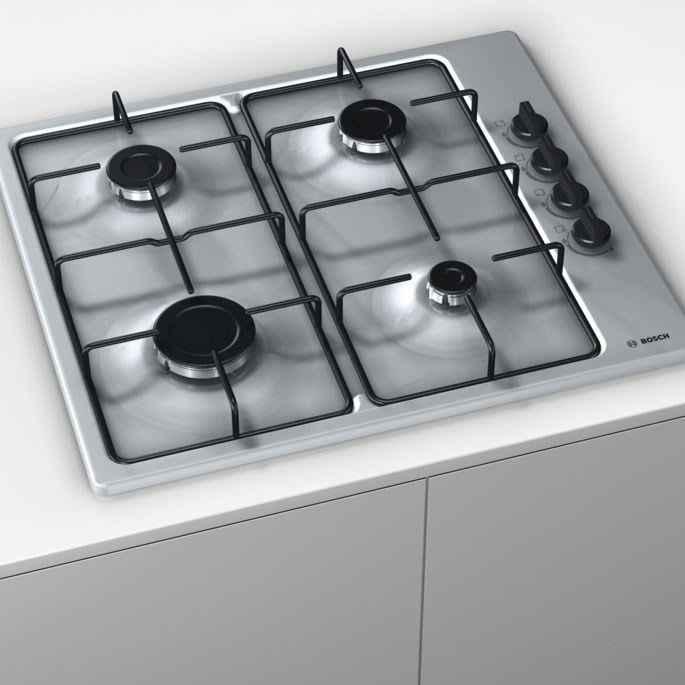 At £189, this is one of the more affordable gas hobs on the market.

It is a four-burner model, with lots of space in between so you can cook different things at once.

It has an automatic ignition to make things easier.

The simplistic dials allow for users to make fine adjustments when increasing or decreasing the temperature.

This hob may be basic compared to some of the other options, but it manages to look sleek so it is great if you are renovating the kitchen. 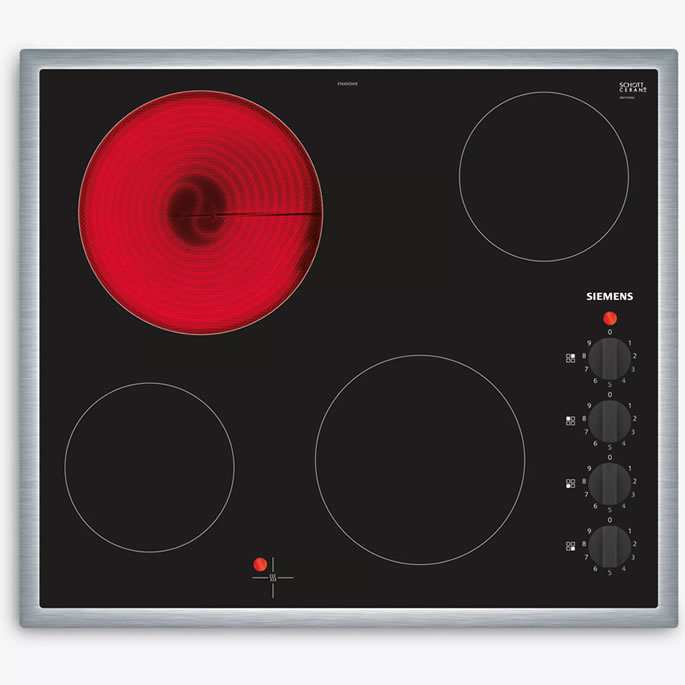 This ceramic hob from Siemens is one of the best options for households with children, thanks to its residual heat indicators.

It has four cooking zones that are QuickLite which basically mean that they heat up quickly.

It has the added benefit of residual heat indicators, so you will know not to put your hands on the hob while it is still hot.

To control the hob, you have to use the Sword knobs, which can easily be turned to one of the nine power levels, and subsequently turned off this way, too.

Starting at the price of £240, this hob is reasonably priced, especially when considering the safety features available. 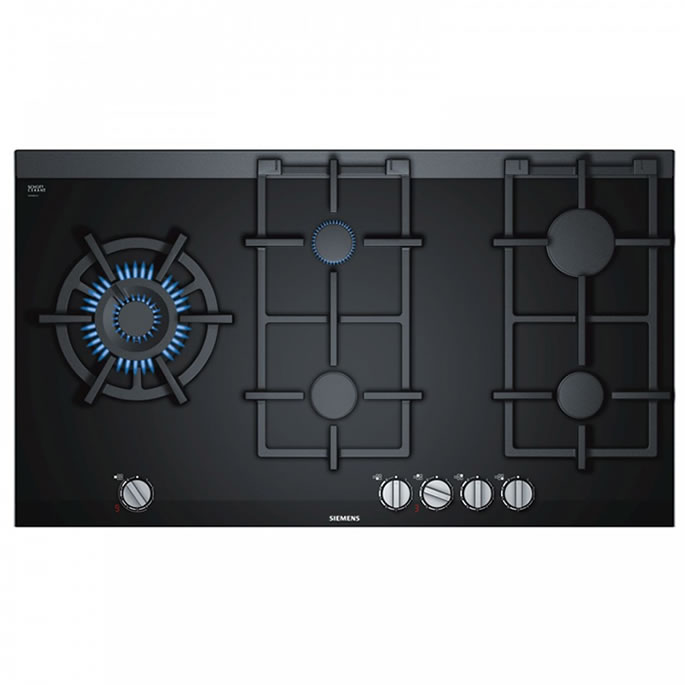 This gas hob has a stylish flat finish that is quick and easy to use.

As well as four regular burners is a dual wok burner that delivers 6 kilowatts for rapid heating.

The design also helps to ensure that cleaning is easy.

It is so easy that the cast iron supports can be removed and cleaned in the dishwasher. 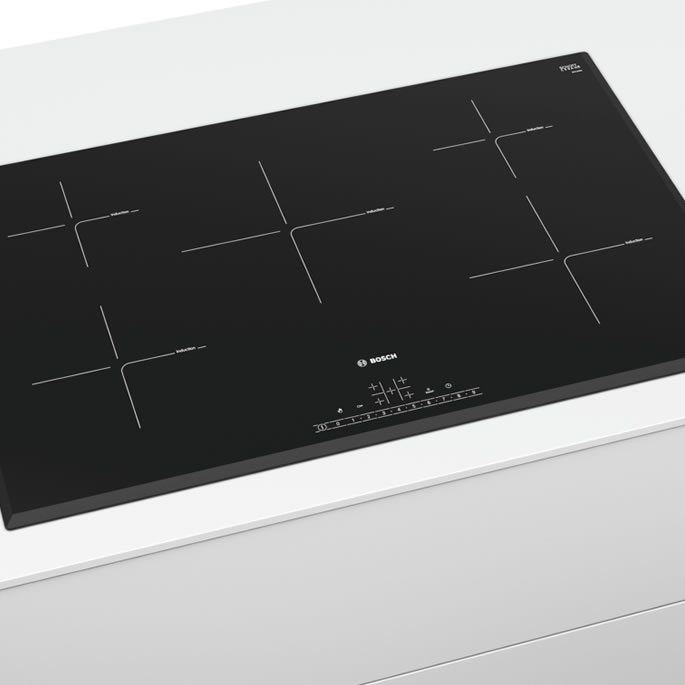 Large families can benefit from this induction hob cooker thanks to its five burners and a plethora of technology.

It has a QuickStart function that detects where you have placed a pot. It then displays the corresponding cooking zone on the display panel.

This means you can select your desired cooking level without any delay.

The PowerBoost function speeds up the cooking process. For example, two litres of water can be boiled almost 50% faster.

It also has a control panel that allows you to select the cooking zones and select the specific power level you want.

At approximately £800, it is quite pricey, but it comes with a lot of positives.

These 10 hob cookers offer a variety of functions and come in different styles to suit any type of kitchen.

Some are gas hobs while others are induction cookers.

But whatever option you decide on, it is important to think about what hob is right for your kitchen, both in terms of appearance and functionality.

Dhiren is a journalism graduate with a passion for gaming, watching films and sports. He also enjoys cooking from time to time. His motto is to “Live life one day at a time.”
Eros Now partners with Facebook for Bollywood Film Festival
Amitabh Bachchan’s NFT Collection auctions for $1 million