Lord Aleem has amassed over 21 million views with over 80 clips on YouTube.

Supercar socialite Lord Aleem has sparked a frenzy amongst his 50,000-strong Twitter followers by announcing he will be auditioning for Top Gear presenter.

The YouTube car vlogger and a friend of Scott Disick, star of Keeping Up with the Kardashians, confirmed on social media he will join the Top Gear host race at the request of his fans.

Mega-rich petrolhead Aleem from Solihull has amassed over 21 million views with over 80 clips on YouTube.

His vlogs are centred around his lavish supercar collection attracting over 177,000 subscribers. His video ‘Picking up my new 2013 Ferrari 458 Spider’ generated almost 2 million views.

Which car review shall I extract the 30 second clip from? Maybe you guys can help me @BBC_TopGear

Aleem is a strong contender, having a proven track record for talking about cars in front of the camera.

The 20-year-old throws his hat into the ring, as the newly-announced Top Gear presenter Chris Evans challenged candidates to send in audition clips demonstrating ‘appetite, hunger and need’.

He also said: “If nobody’s good, nobody is going to get the job.” 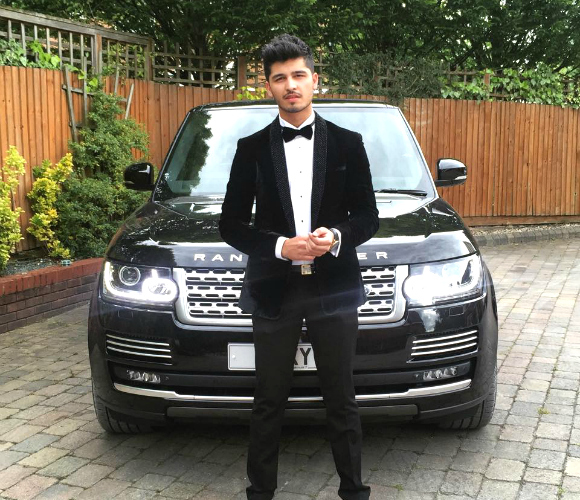 The vacancies stem from the exodus of longstanding hosts Jeremy Clarkson, Richard Hammond and James May after Clarkson was sacked for punching his producer.

Former Top Gear presenter Ashley Blake along with Sky’s F1 presenter Natalie Pinkham and The Gadget Show‘s Suzi Perry are all rumoured to be in the race.

Aleem’s presence may just cater to the diverse global fan base the show has generated over the years.

And on that bombshell, DESIblitz wishes Lord Aleem the best of luck in with his audition!