Every player, be it male or female, young or old, were all ready to make history

Gurcharan  Mall aka The King of Dhol has drummed his way into the Guinness Book of World Records  under the World 501 Dholi’s banner. A total of 632 Dhol players from all backgrounds smashed the previous world record by simultaneously playing the Dhol  for for 12 minutes and 42 seconds on, Saturday 2nd May 2009.

Gurcharan was the man behind this amazing feast of live Dhol rhythms, staged at Centenary Square in Birmingham, UK. He wanted to show and involve all communities to experience how rich and strong his culture was, and came up with the idea of using the Dhol drum as the centre piece to both break a world record and raise money for charity at the same time.

The aim of the World 501 Dholi’s was to beat the previous record was set by 314 UK Dhol players playing for 8 minutes outside the Sandwell Council House in Oldbury in 1999.

The previous number was exceeded by a mighty 632 Dhol players who filled the venue area and participated in the event by officially registering for £5 per person. This number even overtook the 501 total that Gurcharan anticipated. 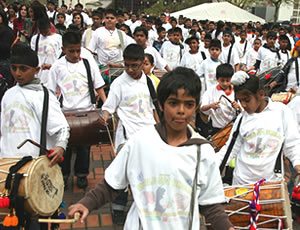 The money raised on the day was for the following charitable causes  Barnados, Macmillan Cancer Support, the British Heart Foundation, a Pingalwarda in Punjab and Sustain, who look after the elderly.

On the day, DESIblitz were at the event to soak up the atmosphere in Centenary Square which was full of excitement and tension. Prior to the finale, the drummers stood together around the Square and copied the stage players to rehearse the beat patterns over and over again. Every player, be it male or female, young or old, were all ready to make history.

As you saw in the interview, all the players enjoyed themselves immensely and played in great synchronisation to break the record. The stage was rocking with male and female players, Gurcharan Mall, and other popular stars like Dhami and Kumar from the legendary Heera Group and Sardara Gill from Apna Sangeet. A nice addition to the stage was Yazz Alexander, a carribean vocalist, who took part too and paid homage to Gurcharan at the end.

A new world record has been set and history has been made by everyone who took part in this unique event in Birmingham. Gurcharan was also awarded the Certificate of Achievement on stage by Gurjeet Kaur Bains, on behalf of the Sikh Times.

The DESIblitz team are honoured to have been able to take part in such a momentous event of UK’s Desi art and culture, and we would like to thank Gurcharan Mall and everyone who attended to make the day a special one to remember.

DESIblitz brings you a unique gallery of pictures from the World 501 Dhol’s event.