Over fifty years after her death, Madhubala still remains an influential figure in Indian cinema. We explore what makes her so fascinating.

“Your vision will freeze once you look at a person like him.”

The beautiful and mesmerising Madhubala remains an evergreen actress of Indian cinema.

Madhubala was a Valentine’s Day gift to the nation. She was born Mumtaz Jehan Begum Dehlavi in Delhi, India on February 14, 1933.

She began her acting career in the early 40s. Over the next two decades, she came in over seventy films.

Through these films, she became one of the greatest actresses ever seen in Indian cinema. Madhubala’s beauty amazed all who saw her, including film colleagues.

However, while she may have had a perfect professional life, her personal journey was full of trials and tribulations. But that only added to the immense interest in her, which has shown no signs of fading.

We take a look at what makes Madhubala still so relevant as she was many years ago.

The Beauty of Madhubala 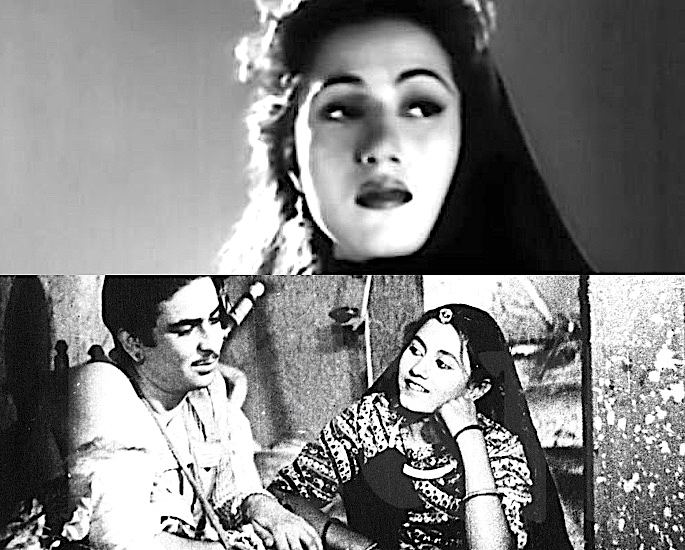 He was once asked in the 60s who he felt was the most beautiful actress of the time.

While answering that she was Madhubala, he commented in Bollywood’s Top 20 Superstars of Indian Cinema (2012):

“…God has sculpted her from marble…”

Actor Shammi Kapoor had his heart set on Madhubala, sending her a proposal. But it wasn’t just the industry that was smitten with the actress.

In 2021, a woman named Kartika working in Tesco in Birmingham said that the most beautiful Indian actress was Madhubala.

Madhubala is familiar to many as ‘The Venus of Bollywood’. It was Kamal Amrohi’s Mahal (1949) that catapulted her to stardom. Thereafter, she came to the notice of many film lovers.

Audiences fell head over heels with Madhubala’s beauty that her acting became a secondary aspect. 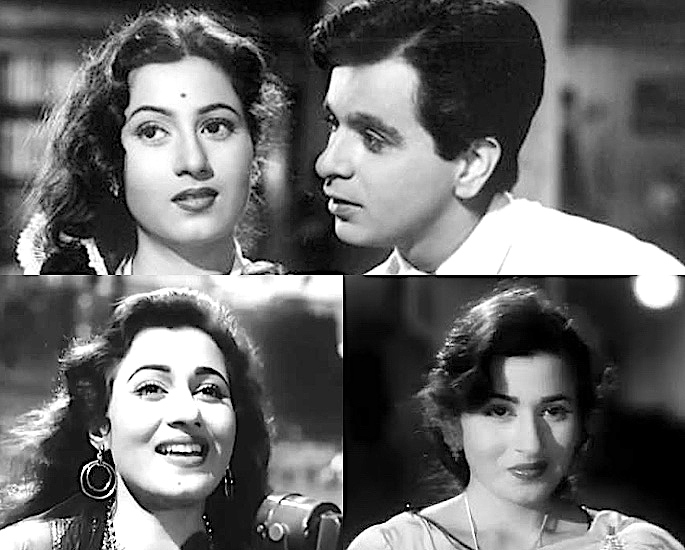 It is unfortunate that the good looks of Madhubala overshadowed her capabilities as an actress.

Mahal resulted in producers queuing up to work with her. She went on to star alongside many leading heroes. She appeared in memorable films with Ashok Kumar, Dilip Kumar, Dev Anand and Guru Dutt.

In some of these films, she even received first billing in the credits. This indicated that she was a more popular star than others.

She took the mantle of this title, replacing singing star Suraiya as the most loveable actress.

She shone in many films, which displayed her excellent grasp on dramatic and emotional roles, as well as superb comic timing.

Long before Aishwarya Rai Bachchan, Priyanka Chopra or Irrfan Khan, Hollywood had set its sights on another Indian film star.

In the 50s, Academy-Award winning filmmaker Frank Capra had taken an interest in Madhubala. He even came to India to offer her a career in the West. However, her father, Ataullah Khan, refused.

In 1952, the Hollywood magazine, Life, summed up the craze of the actress. Talking about Madhubala, the headline read:

“The biggest star in the world…and she’s not in Beverley Hills.”

This evidently described how popular she had become. Not a single one of her contemporaries achieved this kind of hysteria.

The Tragic Courtesan of Mughal-E-Azam 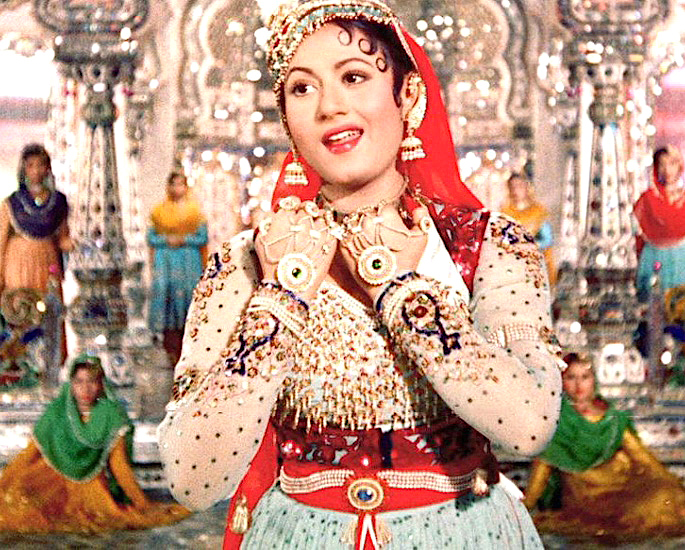 Madhubala may have acted in some classics. But it is K. Asif’s historical epic Mughal-E-Azam (1960) that she will perhaps be most remembered for.

In reply to a question about naming any Madhubala films, Savita, a British Indian woman was only able to recall Mughal-E-Azam.

This could contradict Madhubala’s relevance. But the same person could not mention a single Meena Kumari film.

But Mughal-E-Azam is not just any film. It was under production for over ten years. Madhubala won the role of Anarkali, following rejections from Suraiya and Nargis.

This role proved Madhubala’s dancing abilities. As the doomed Anarkali, she wanted to wear authentic chains rather than fake ones. This was a clear indication of Madhubala’s dedication to her craft.

The Guardian went on to describe the film and her performance as a “landmark of cinema.” It played for three years at Mumbai’s Maratha Mandir theatre.

Having appeared in such an enduring classic, that fact alone still makes Madhubala relevant. 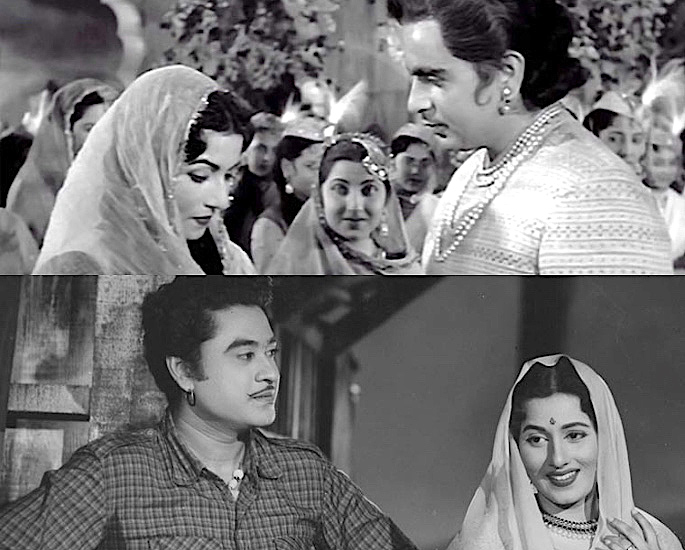 Dilip Kumar has had a happy marriage with his wife Saira Banu for over fifty years. Yet, his love story with Madhubala is still a major talking point.

Madhubala and Dilip Saab came together during the shoot for Tarana, with their romance blossoming from then on.

It all seemed to be happy days for the couple. She even once complimented Dilip Saab, saying:

“Your vision will freeze once you look at a person like him.”

However, when Madhubala was signed for BR Chopra’s Naya Daur (1957) opposite Dilip Saab, things turned ugly.

Madhubala’s father Ataullah Khan refused to allow her to go for the long outdoor shoot that the film required.

This led to the matter going to court. Madhubala was devastated when Dilip Saab gave evidence against her.

In 2020, her sister Madhur Bhushan explained that it was “zid (ego), which destroyed [Kumar and Madhubala’s] relationship.”

After separating from Dilip Saab, she married her frequent co-star and singer Kishore Kumar. Due to her illness, their marriage had complications.

However, Madhur explains that Kishore Ji was never abusive towards Madhubala.

Writer Mohan Deep has a contrasting view in his unofficial biography, The Magic and Mystique of Madhubala (1996).

Deep alleges that Kishore Ji regularly whipped Madhubala and that her ailing was fictitious.

Despite what happened, Dilip Kumar has a massive fan following. Furthermore, Kishore Kumar remains one of India’s most-loved singers.

Having had relationships with such loved stars, Madhubala’s aura cannot be erased even if people forget her films.

The Illness that Claimed her Life 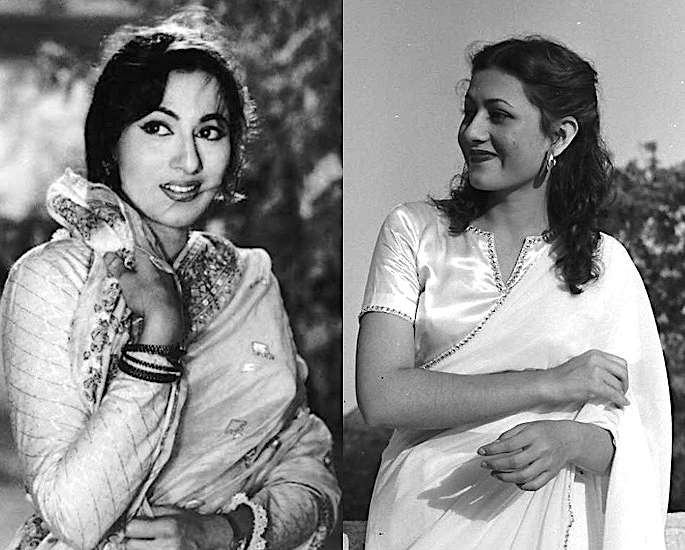 In 1954, Madhubala discovered that she had a ventricular septal defect. In other words, she had what many refer to as a hole in her heart.

The disease that claimed her life is perhaps the most-talked-about aspect of Madhubala’s personal life.

After Mughal-E-Azam, she became bed-ridden. Her body almost became a fountain of blood, with blood in her urine.

Kishore Kumar took her to London and Russia, where doctors said that she would not survive.

Despite, no chance of long term survival, Madhur Bhushan describes her as having a “strong will-power.”

She also said that Madhubala “defied” the prediction and lived for nine years.

In his 2014 autobiography, The Substance and The Shadow, Dilip Kumar dedicates an entire chapter to Madhubala.

The veteran regrets that “medical facilities then were not as advanced as they are now.”

Madhubala passed away due to her illness on February 23, 1969, at the age of thirty-six.

At the time of her death, Madhubala was working on her film Chalaak opposite Raj Kapoor. That remained incomplete as did her directorial debut, Farz Aur Ishq.

But Madhur also reflects that “it is because of this mystery, this non-exposure that Madhubala remains so unforgettable.”

The world is seemingly taken over by social media with film celebrities getting thousands of likes for a single photo. Communication seems to be the key to staying relevant.

But Madhubala hardly had any communication with her fans. Maybe that’s why people yearn to learn more about her.

She has many fan pages dedicated to her on Instagram. One of them is evergreen_madhubala, which stands at over 4000 followers.

In 2010, Madhubala’s tomb was controversially demolished to make space for newer graves. Even in death, she has no communication with the world. 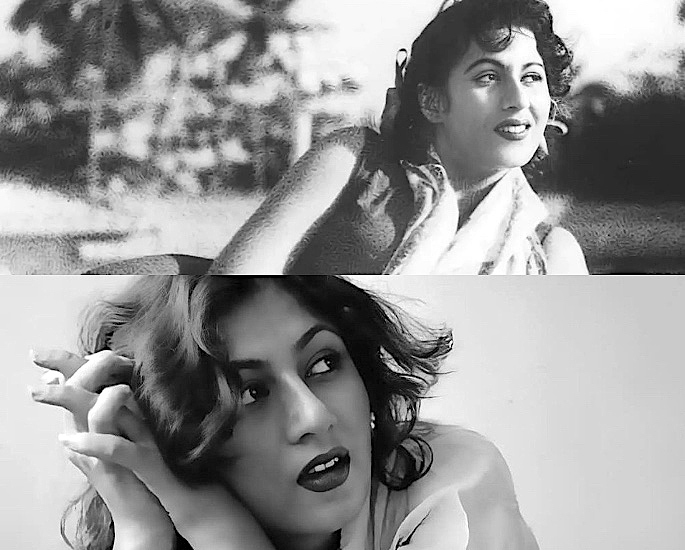 Upon seeing a photo of Madhubala, Bradley from Birmingham commented that she is “pretty” and he read her biography online. He was quite impressed. Bradley was born two years before her death.

This shows the impact Madhubala had on a western viewer from a different generation. It could be an indication of her infectious star power.

Madhubala’s looks are one thing, but her acting career deserves more appreciation. Madhubala may have never won any awards, but that does not mean she was a poor actress.

Several books about Indian cinema mention Madhubala. These include Bollywood’s Top 20 Superstars of Indian Cinema and Icons from Bollywood (2005).

This shows that any list of Indian film stars is perhaps incomplete without Madhubala.

Even when other big stars of her time are omitted, Madhubala is always there. That is her greatness.

There are many popular artists in world cinema that are still remembered. However, few stay as relevant so long after their deaths.

Sure, there are many beautiful Indian actresses, each with a staggering body of work.

But from Madhubala’s time, how many people remember them with as much fascination?

Evidently, actresses like Nargis, Suraiya and Meena Kumari haven’t been as fondly talked or written about.

If anything, it might be easy to forget a film celebrity from the 50s. But in 2021, it’s harder to forget a fashionista and a great actress such as Madhubala.

Manav is a creative writing graduate and a die-hard optimist. His passions include reading, writing and helping others. His motto is: “Never hang on to your sorrows. Always be positive."
Gauahar Khan breaks Covid-19 Rules despite ‘Positive Test’
‘Ram Setu’ to be produced by Amazon Prime Video