Why Firewatch is a Must Play

Firewatch is the fruit of two years of work from new studio Campo Santo. Here are four reasons why you must play this beautiful game.

A clear and coherent game design is at the forefront of all elements of Firewatch.

Firewatch is a difficult game to talk about, because almost all of its content could be considered spoiler territory.

But Campo Santo’s first game is a beautiful, tense and often heartbreaking tale of escapism, isolation and paranoia.

DESIblitz gets our hands on this game to find out why it is absolutely worth your time. 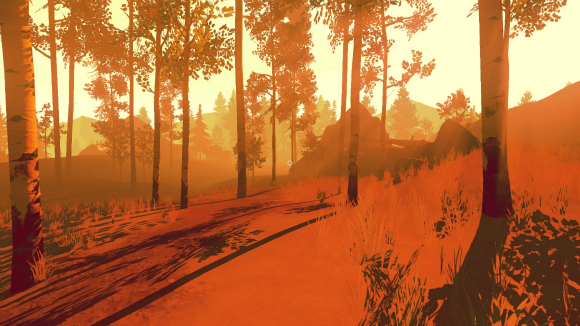 Firewatch puts you in the shoes of Henry, a man retreating from a tragic event in his personal life who has taken on the role of a fire lookout at the Shoshone National Forest in Wyoming.

Taking place during the summer of 1989, in the aftermath of the Yellowstone fires in the previous year, Henry’s job is to make sure history doesn’t repeat itself.

His only line of communication is with another lookout named Delilah, with whom he begins to develop a quite intense friendship.

Then strange things start to happen, and Henry and Delilah find themselves in the grips of paranoia and the fear of a stranger prowling the woods. 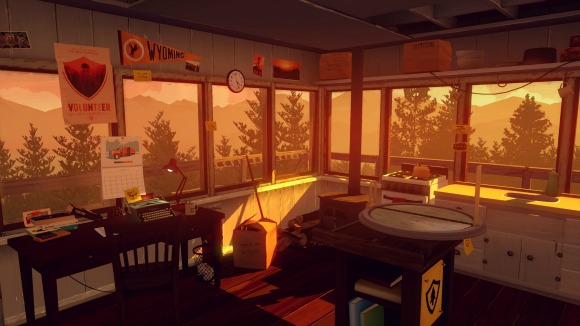 The story is incredibly well written. Given the lead writers Jake Rodkin and Sean Vanaman previously worked on Telltale’s The Walking Dead Season One, this should come as no surprise.

After an emotionally heavy text-only opening, the majority of the story is told through the environment and the conversations that Henry and Delilah have over the radio.

Dialogue feels natural, and by limiting the narrative framework almost exclusively to the conversations of two relative strangers, the game is able to create an impressive sense of mystery while keeping the main plot beats simple ad clean. 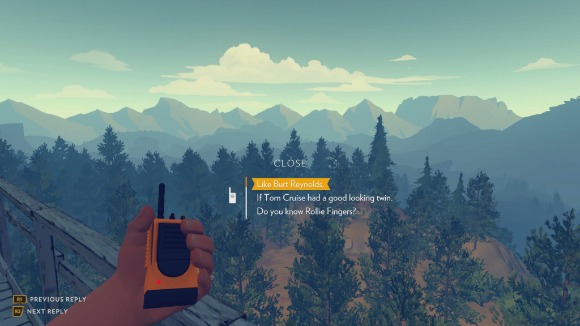 This is all backed up by some great voice work. Henry is voiced by Rich Sommer, of Mad Men fame, who does a capable job of representing the player’s first time experience.

High praise should go to Cissy Jones, who plays Delilah. Giving an incredibly nuanced performance, Jones encapsulates the feeling of a person who has spent the best part of a decade escaping her own personal issues in the wilderness.

2. Play a walking simulator with a difference 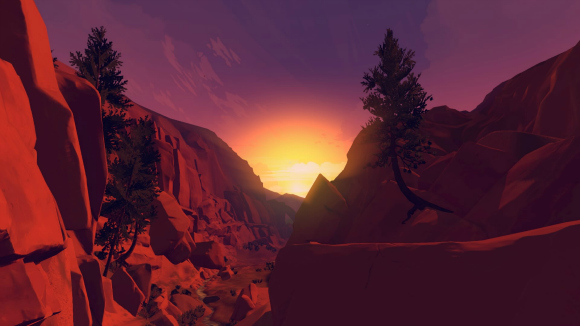 Firewatch is a game, and as such needs compelling game mechanics, which it has in droves.

Taking place in a semi-open but largely linear game world, it has rings of walking simulator and metroidvania about it.

This becomes second nature, and means that the game never loses pace, as you talk to Delilah while out on the trail – even when climbing, picking up litter or cutting down a tree. 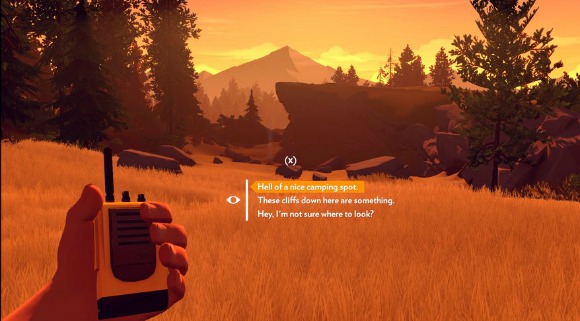 A clear and coherent game design is at the forefront of all elements of Firewatch.

The player is tasked with navigating the forest using only a map and compass, which creates a sense of immersion without alienating the player.

As you find your bearings, you end up relying less and less on the map, thanks to some great world design by Mark of the Ninja designer, Nels Anderson.

For players looking for more of a challenge, Firewatch offers the option to turn off map markers and ‘mission’ prompts also.

As the game progresses, you will find new equipment that allows you to set up shortcuts and access new areas.

This is largely kept in line with the game’s plot, since access to each part of the forest is contingent on where the story wants you to go.

But it benefits from this high level of curation, as you never break the pace of the game as a result.

3. Immerse yourself in a gorgeous art direction 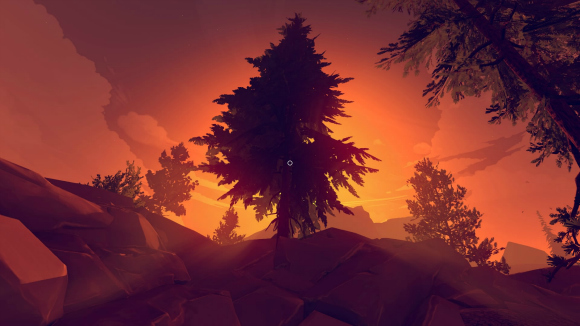 If you end up getting lost in the woods, this is far less frustrating than you would imagine, thanks in part to the fact that the game is incredibly beautiful.

Designed by Olly Moss and Jane Ng, the game has a warm and light-hearted art direction that provides a fantastic dichotomy with the its darker elements.

The game even gives you a disposable camera with limited film, so Henry can take pictures himself. 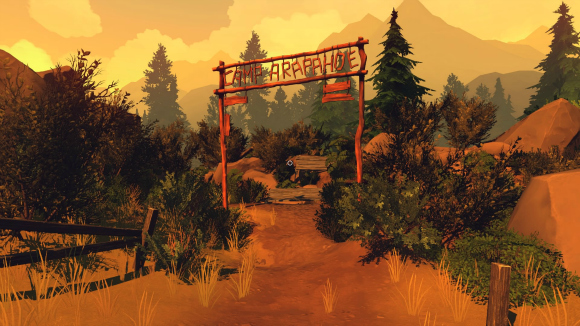 There is very little that can be said about musician Chris Remo’s beautifully minimalist score, other than it suits the game perfectly.

What is so brilliant about this sound direction is that, like the art direction and storytelling, it acts as a vital component in establishing this ineffable sense of belonging to a specific era. 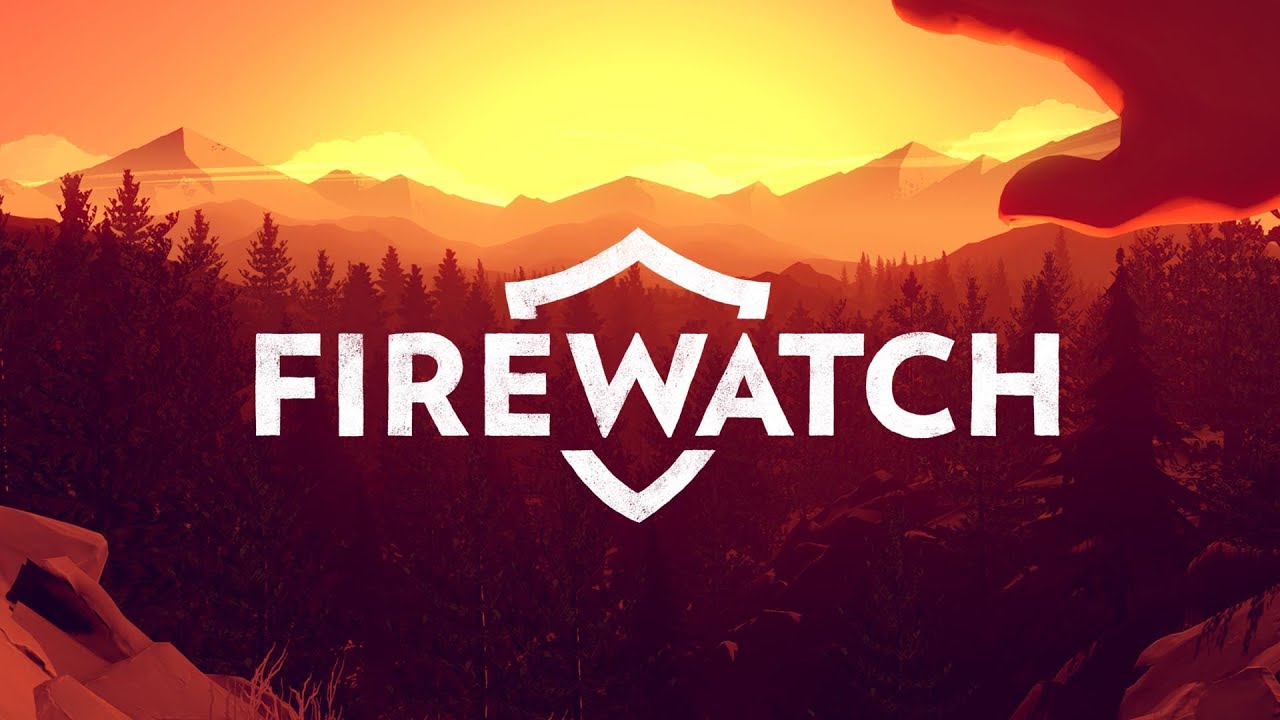 Our review is based on the PS4 version of the game. As such, it is important to note that the game has a number of performance issues.

Framerate dips and short pauses as you navigate the game world are frequent and somewhat irritating. There have also been some rarer instances of more game-breaking bugs.

Campo Santo have stated that they are working on getting this patched as soon as possible. Fortunately, there are fewer technical issues in the PC version.

If its compelling narrative, fun gameplay and gorgeous aesthetic do not convince, it costs only $20 (£15) and takes about four hours to complete.

That’s a time and money risk worth gambling on for what is a great gaming experience.

For the best experience, DESIblitz recommends that you play this game alone, to immerse yourself in the isolation of the main character, and play through in one sitting.

Images courtesy of Campo Santo, PC Gamer and Do You Even Game Bro