A botched hijack resulted in two South African Indian women being shot. The incident happened in Isipingo, south of Durban.

"Criminals are desperate and not shy to use their guns."

The incident happened on November 14, 2019. Shireen Kalicharan and Brenda Naidu were shot while stationary at a stop street in their silver Volkswagen Polo.

According to Colonel Thembeka Mbele, Shireen had been driving when two armed suspects approached the vehicle. A brief scuffle ensued before they opened fire.

Both women sustained gunshot wounds to the head and were declared dead at the scene. Nothing was taken and the suspects fled.

Charges of murder are being investigated in relation to the suspects involved in the botched hijack.

Isipingo Community Policing Forum chairman Aiden David called it a senseless killing and said it may have been a case of mistaken identity.

Mr David said: “Four shots were fired through the window of the car hitting the women.

“Criminals are now waiting at the entrances and exits because of a crime clampdown in the community. When put in a situation like this do not resist. Criminals are desperate and not shy to use their guns.”

Paramedics helped comfort the victims’ family members who broke down at the scene.

PT Alarms and ambulance services spokesperson Dhevan Govindasamy said that a search was on for the suspects who fled in what looked like a white Hyundai H1. 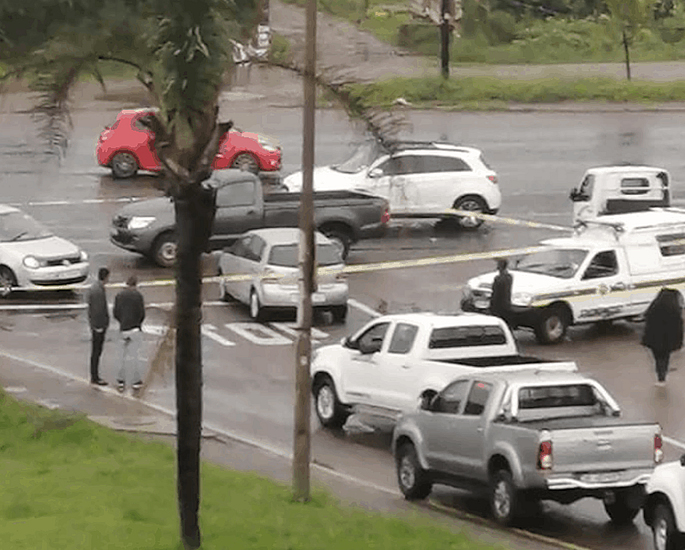 He stated: “The team searched the surrounding areas but no arrests were made.

“There appears to be a crime spike in the area with two hijackings in two weeks where both vehicles were recovered; petty thieving continues unabated and there have been reports of theft of vehicles.”

Shireen was a mother of three, owned her own baking company and was a beauty therapist while Brenda had two children.

Scarlet Thread Ministries Pastor Rakesh Singh explained that the two women had gone to buy items for a three-day trip that the church had planned.

Following the botched hijack, the trip has been cancelled.

“They were like daughters to me. They were the best of friends. The deaths will have a big impact.”

“At first, I did not want to believe it was them. Only when I arrived at the scene and saw their bodies did I break down emotionally.”

Sunil Kalicharan, a spokesperson for the family, said they were on their way to Galleria Mall.

He revealed: “There were bullet holes through the window. Residents converged on the scene which depicted how well-liked they were in the community. The family are inconsolable.”

Ward councillor Sunil Brijmohan stated that the shooting has left the community in shock.

He added: “It would take us a long time to get over it. I am considering stopping my wife from driving.

“Many parents are driving to and from the schools to fetch their children and this is a concern as well.

“The blame lies at the feet of the government for not controlling crime. They are interested in securing investments but who would want to invest when the citizens are not safe anymore.

“I will write to the provincial structures because it is just not the minorities that are being targeted. Criminals are targetting all race groups.”

“We the community are sick to the core with the government for their lack of accountability. Criminality and dodging bullets have become a way of life.

“Enough is more than enough, as I appeal to each and every single one of you, and every community leader to stand by my side and to do whatever it takes to persuade the government, to reconsider the death penalty in South Africa.

“I solemnly call on the community to stand shoulder to shoulder with the bereaved families during this very difficult period as they mourn their loss.”

“We need to take to the streets. It happened to them it can happen to you really soon. My mind is reeling in shock.”

“We are leading into 16 days of activism but we are busy sitting back and watching our community go up in flames.

“Rise up People of Isipingo. Let us stop being active social media people. Instead, let us be community activists. No one will protect our children if we don’t.”

Zarina Assan wrote: “I lived in Lotus Park 45 years never seen things like this but now we can’t live in our own house.

“We are frustrated our community need to unite together it can be anyone next.”

Dhiren is a journalism graduate with a passion for gaming, watching films and sports. He also enjoys cooking from time to time. His motto is to “Live life one day at a time.”
Pakistani Model Samara Chaudhry’s Private Videos Leaked
KPMG Auditor Brother killed Sister aged 35 that He ‘Loved’