"We speak softly but carry a big stick"

Legendary Bollywood superstar Amitabh Bachchan, who has over 35 million followers on Twitter were shocked to find that his tweets were not from him personally after his account was allegedly hacked by a Turkish cyber attacker group.

Mumbai Police on Tuesday, June 11, 2019, said that Big B’s Twitter account had been subject to an alleged cyber attack by a ‘pro-Pakistan’ Turkish hacker group, who are known as Ayyildiz Tim.

The Public Relation Officer (PRO) of Mumbai Police confirmed that a full investigation has been launched into the incident, saying:

“We have informed our cyber unit and Maharashtra Cyber about the hacked Twitter account of Amitabh Bachchan. They are investigating the matter. Further updates awaited.”

Ayyildiz Tim not happy with the treatment of Turkish footballers in Iceland, pinned a tweet on Senior B’s Twitter handle saying:

“This is an important call to the whole world! We do condemn the irrespective behaviors of Iceland republic towards Turkish footballers. We speak softly but carry a big stick and inform you about the big Cyber attack here. As Ayyildiz Tim Turkish Cyber Armny +++”.

The hackers seem to be in praise of their friendly relations with Pakistan. While they slammed India for the alleged attacks on Muslims during Ramadan. 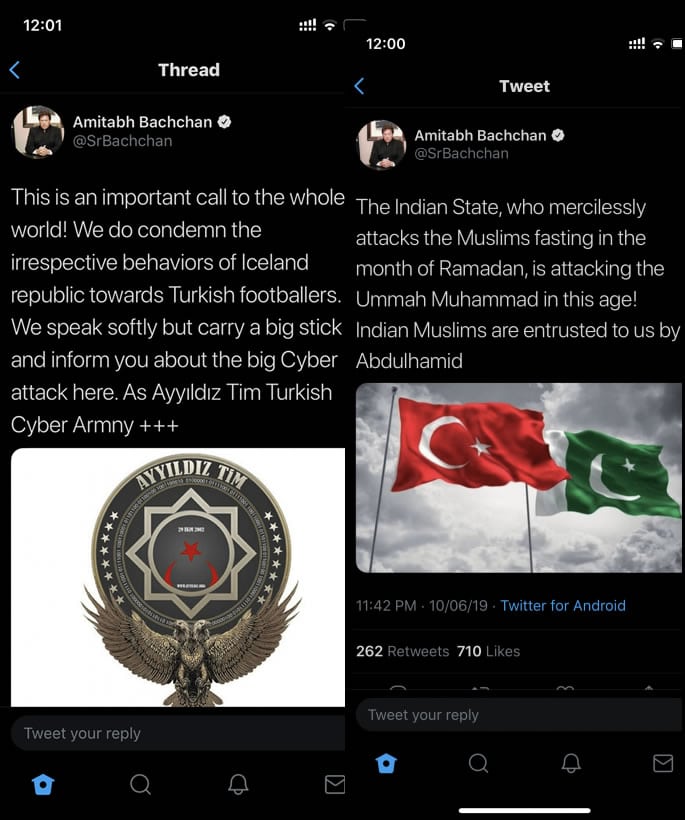 The Turkish hackers allegedly uploaded photos of Pakistan and Turkish flags with a tweet saying:

“The Indian State, who mercilessly attacks the Muslims fasting in the month of Ramadan, is attacking the Ummah Muhammad in this age! Indian Muslims are entrusted to us by Abdulhamid.”

They swapped the image of Bachchan’s Twitter profile with an image of Pakistani Prime Minister Imran Khan. They added an emoji of a Turkish flag and changed the Sholay actors’ bio text saying:
“Actor … well at least some are STILL saying so !! Love Pakistan.”

Within about an hour the tweets from Mr Bachan’s account were hurridly deleted, after the discovery of the alleged hack.

His bio and photo were restored back to the original.

After Amitabh Bachchan, Bollywood singer and performer Adnan Sami was the victim of a similar attack, which looked like it was allegedly from the same hacker group from Turkey.

The profile picture of Sami had been changed to that of Prime Minister of Pakistan Imran Khan. The pinned tweet on Sami’s account read:

“Whoever shows the courage to betrayal our brother country Pakistan know that you will see Pakistan’s prime minister’s photo and Pakistan flag as profile picture. (sic)”

This is not the first time the same hacking group has attacked Indian accounts of a number of actors, politicians, and public figures. It has allegedly made attacks in the past.

Other Bollywood stars like Sushant Singh Rajput, Shahid Kapoor and Arjun Kapoor have also experienced attacks of this nature in the past.

Amit enjoys creative challenges and uses writing as a tool for revelation. He has major interest in news, current affairs, trends and cinema. He likes the quote: "Nothing in fine print is ever good news."
Kareena Kapoor trolled for ‘looking too old’ in Selfie
10 Best Indian Amazon Prime Series You Cannot Miss