Former WWE Indian wrestler, The Great Khali, has been accused of slapping a worker in Punjab of which a video has gone viral.

"Why did you raise your hand at the boy?"

A viral video has emerged of the popular WWE Indian wrestler known as The Great Khali being accused of slapping a toll worker who asked for his ID at the Ladowal toll plaza.

Another plaza toll worker pulled him up on the incident near Punjab’s Phillaur area.

The commentary on the video clip shows a heated exchange between the plaza worker and Khali regarding him allegedly slapping the toll worker, who is also seen in the video.

Khali is approached at the rear window of his vehicle and asked by the person filming in Punjabi:

“Why did you raise your hand at the boy?

“I am Kawaljeet speaking from Phillaur. Why did you raise your hand at the boy? Here you slapped this boy. Why did you slap him?

Khali responds by saying that they are ‘trying to blackmail’ him with this accusation.

Kawaljeet says: “No, I am not blackmailing you. Why did you hit him? Just give the ID card if you have it.”

Khali responds, saying: “I don’t have the ID card.”

According to Khali, he was travelling from Jalandhar to Karnal and the toll workers want to take a photo with him but he refused. And after the refusal, the toll worker started to misbehave with him.

Barricades were preventing Khali’s car from going forwards. Other passers-by in their cars started to pap their horns. The toll workers do not allow his car to pass while the altercation continues. 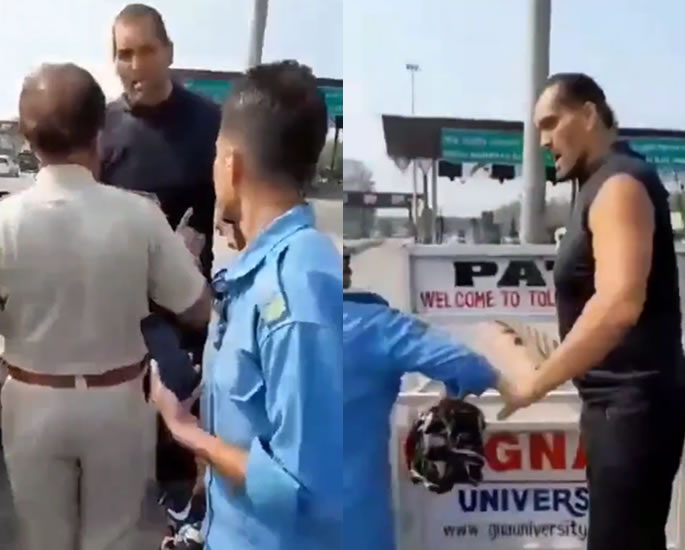 Then a police car arrives and a police officer is seen intervening at the scene as Khali comes out of his car to address him. He towers over him and the young man who he allegedly slapped.

The alleged victim says to the officer: “Brother, these guys slapped him. I asked for the ID card, then he slapped me.”

“Who slapped him? Why did you slap him? Stand back.”

Kawaljeet says: “We are not blackmailing you. We have everything recorded on camera, we can get it checked.”

Khali still denies the accusation saying he ‘shouted at him’ as Kawaljeet says:

“What shouting? Why did you slap him? We can check it on the phone camera that the alleged victim is holding.”

To which Khali responds with the blackmail counterclaim.

Then as Khali walks back to his car around the front and during this point as the young man tries to go past him, he is grabbed by Khali and pulled.

The video shows Khali returning to the car and Kawaljeet saying:

“Hello, you cannot just hit a person like this. This is his number plate of his (The Great Khali). You oaf of a person. You are blackmailing and being adamant. Forget that you are a wrestler. Leave from here.”

Here is a social media post of the video about the incident:

In terms of his career, The Great Khali became a professional wrestler by appearing for All Pro Wrestling (APW) in 2000.

In 2007, the seven-foot one-inch wrestler from Punjab became the first Indian to sign a contract with WWE and won the WWE World Heavyweight Champion in July 2007.

Amit enjoys creative challenges and uses writing as a tool for revelation. He has major interest in news, current affairs, trends and cinema. He likes the quote: "Nothing in fine print is ever good news."
Gang caught running fake ‘IPL’ to dupe Russian gamblers
Lalit Modi announces ‘New Beginning’ with Sushmita Sen