A group of women from Switzerland were seen dancing to Diljit Dosanjh’s popular track G.O.A.T. The video has made waves on social media.

A video has gone viral of a group of women in Switzerland doing the bhangra to Diljit Dosanjh’s popular track G.O.A.T.

The actor and singer released his much-anticipated album, G.O.A.T. in July 2020, but the title track quickly sent the internet into meltdown.

The song has more than 56 million views on YouTube and it’s popularity continues to grow.

It has now reached Switzerland and a viral video shows a group of women in Switzerland dancing to the catchy track.

The video was shared on Twitter by Indian Foreign Service officer Gurleen Kaur. In the video, a group of women can be seen doing the bhangra in what appeared to be a class led by Karanvir Singh, a representative of the World Economic Forum.

The group were dancing in sync with Karanvir to the Punjabi track G.O.A.T.

The 45-second clip quickly went viral, amassing more than 22,000 views and over 1,000 likes. The video even caught the attention of Diljit, who retweeted it.

The fun dance video also led to a wave of comments from viewers, expressing how much they liked the video.

One person wrote: “Love this post! You’re the best.”

A lot of social media users were appreciative that the video was showing Punjabi culture being exhibited in other countries.

This is not the first time that one of Diljit’s songs has made it big overseas. In May 2020, he had shared a video of residents of a UK neighbourhood street dancing to his song Veervaar.

The lyrics for G.O.A.T. were written by Karan Aujla and the music video was directed by Rahul Dutta.

The song and visuals ooze energy with a strong upbeat flavour which encapsulates hard edgy lyrics as Diljit declares his love.

The album symbolises an artist who has created an album packed with variety with different styles and genres of songs for everyone to enjoy no matter what your taste.

“I am truly humbled to see the response my latest musical offering is getting, each of the tracks are being appreciated for their own merits.”

Songs on the album have Diljit’s signature hip-hop Punjabi fusion along with other tracks which have incredible lyrics and differentiate his unique capabilities as a singer.

The Music Video for G.O.A.T. 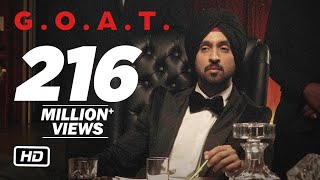 Dhiren is a journalism graduate with a passion for gaming, watching films and sports. He also enjoys cooking from time to time. His motto is to “Live life one day at a time.”
Kailash Kher slams Badshah over ‘Fake Followers’ Scandal
Shaan launches debut Bengali Track ‘China’