Sonam Kapoor attended her sister Rhea’s wedding with her husband Anand Ahuja but a picture has reignited the pregnancy rumours.

"She is definitely pregnant."

The pregnancy rumours surrounding Sonam Kapoor have resurfaced once again.

The Bollywood actress and her husband Anand Ahuja attended her sister Rhea’s wedding to Karan Boolani.

It was a low-key ceremony in Juhu, Mumbai.

While it was Rhea‘s big day, all eyes were on older sister Sonam.

For accessories, Sonam stood out with a statement neckpiece and stunning maang tikka.

Her makeup was subtle but effective, with a little blush on her cheeks and winged eyeliner. She also had her hair tied in a neat bun.

Meanwhile, Anand matched in a pastel kurta paired with a dark blue sherwani.

The pictures appeared online, however, some netizens looked at Sonam’s appearance and said she looked pregnant.

One person said: “She looks pregnant!”

Another wrote: “She is definitely pregnant.”

A third netizen commented: “I think she is pregnant.” 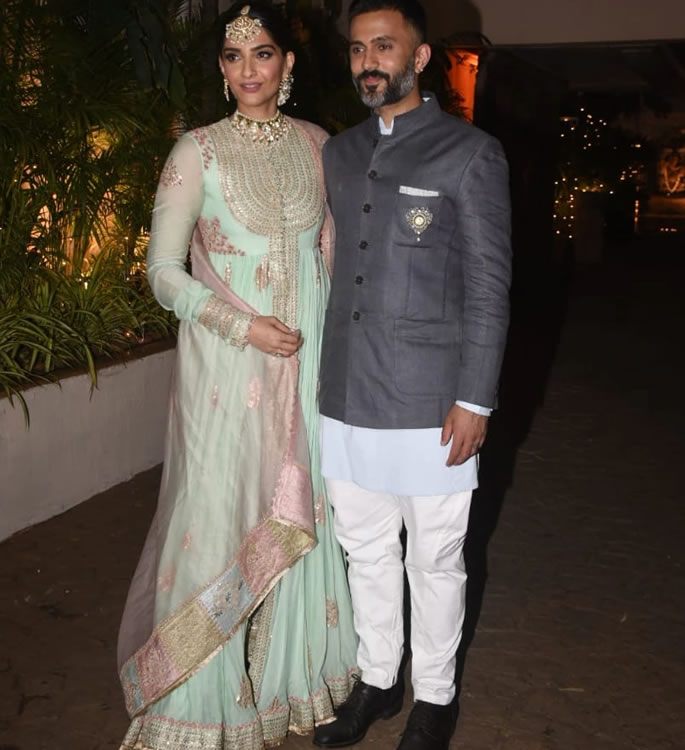 This is not the first time that social media users have speculated that Sonam Kapoor is pregnant.

Netizens thought she was expecting her first child following her return to India in July 2021.

She and Anand returned to Mumbai after spending more than a year in London due to the Covid-19 pandemic.

Upon arriving at the airport, the couple were welcomed by her father Anil Kapoor.

But since then, there was speculation that they were expecting their first child.

In one instance, Sonam had opted for a grey and blue printed midi dress with a blue and red jacket. To complete her look, she had added blue heels and a Birkin bag.

Her choice of outfit had made some people wonder if she is pregnant.

The pregnancy rumours only increased when it was revealed that Sonam had visited a clinic.

However, Sonam put the pregnancy rumours to bed in an Instagram Story.

She shared a short video clip that was captioned:

The new pictures of Sonam at her sister’s wedding has refuelled the rumours, but the actress has not commented on the speculation as of yet.

Dhiren is a journalism graduate with a passion for gaming, watching films and sports. He also enjoys cooking from time to time. His motto is to “Live life one day at a time.”
Dev Patel reveals Racism Struggles in the Film Industry
Ananya Panday responds to Trolls calling her ‘Struggling Didi’