Sanjay Dutt was trolled by social media users after he wished only Iqra on National Girl Child Day even though he has another daughter.

"I pray that every girl child is given the love and care they deserve!"

Bollywood actor Sanjay Dutt is often seen as a caring father to his two daughters Trishala and Iqra when he is not filming.

He makes sure to always be by their side whenever they need him.

It was National Girl Child Day on January 24, 2019, which is celebrated to increase the awareness among people about all the inequalities faced by girls in society.

Sanjay celebrated the day with a social media post, however, it has attracted attention for all the wrong reasons.

Along with the picture, he wrote:

“My daughter is my treasure. I pray that every girl child is given the love and care they deserve! #NationalGirlChildDay.”

What caught Instagram users’ eyes was that Sanjay only posted a picture of Iqra and there was no sign of wishing his eldest daughter Trishala on the occasion.

Within no time, users were trolling Sanjay for supposedly forgetting about his eldest daughter and showing favouritism towards Iqra. 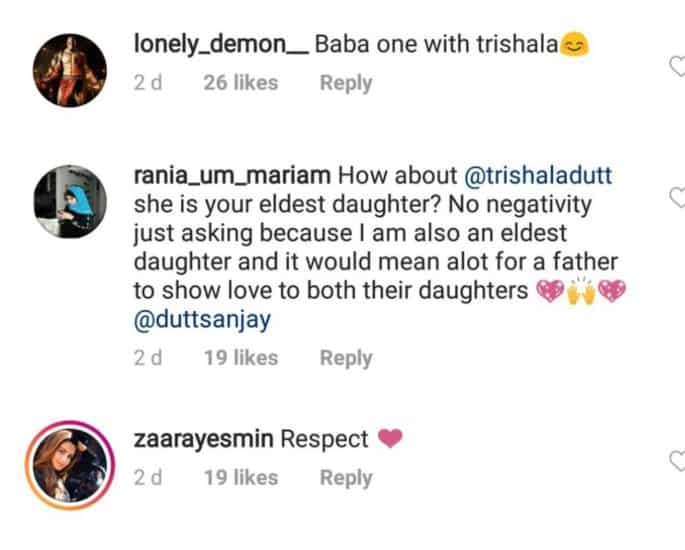 “How about Trishala Dutt, she is your eldest daughter? No negativity just asking because I am also an eldest daughter and it would mean alot for a father to show love to both their daughters”

Another user lonely_demon commented: “Baba one with Trishala.”

While some users provided a subtle reminder to Sanjay to wish Trishala, others were not happy about the post and were quick to let Dutt know.

One user wrote: “Are u forgetting you have two girl childs?”

Another person posted: “Sanjay Dutt, hope now u understand the sensitivity of being a father.. & how to be respectful for girls.”

His wife Manyata also commented on the picture, hinting that Iqra has always been his favourite person in the family.

She commented: “The love of your life… your most favourite person of the family #appleofyoureye.”

Although it seemed Sanjay did not wish Trishala on National Girl Child Day, they share a warm relationship. The duo is often seen commenting on each other’s posts.

Trishala, aged 30, is Sanjay’s daughter from his marriage to Richa Sharma who sadly passed away in 1996.

Despite not sending his best wishes to his eldest daughter, there is no doubt that Sanjay loves both of his daughters equally.

Dhiren is a journalism graduate with a passion for gaming, watching films and sports. He also enjoys cooking from time to time. His motto is to “Live life one day at a time.”
Salman and Aishwarya attend Subhash Ghai Birthday Party
Sanam Baloch allegedly Fired from her Morning TV Show