Pakistani actress Sana Javed has been dropped by fashion brand Rang Rasiya in light of the allegations over her “unprofessional” behaviour.

"we at Rang Rasiya decided to disassociate ourselves"

Fashion brand Rang Rasiya has dropped Sana Javed over allegations of her “unprofessional” behaviour whilst working with models.

The actress had been accused by several models of belittling them and treating them disrespectfully.

The allegations came to light after model Manal Saleem complained about an “entitled” celebrity whilst working with them for a brand.

Sana fired back, dismissing the claims as “lies” and issuing legal notices against some of her accusers.

The brand revealed that the incident between Manal and Sana happened during their shoot.

In a statement, Rang Rasiya said:

“In light of recent allegations brought forth against Sana Javed, we at Rang Rasiya decided to disassociate ourselves from the concerned person who was before the main face of our Eid campaign.”

Rang Rasiya said it is “deeply disturbed” by what happened between the pair.

“We did a reshoot with another celebrity as we respect public sentiment, despite the cost that we have borne.

“It is a request to the fashion fraternity to please be considerate towards the brands too who spend millions on such shoots apart from their time and effort.” 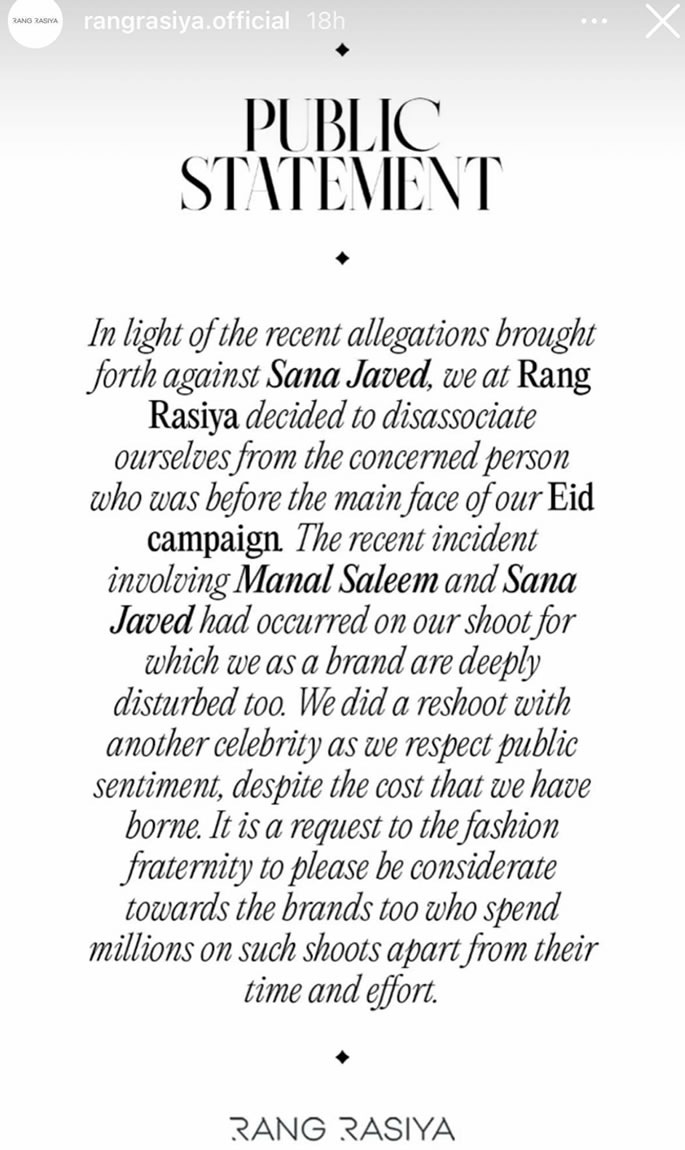 The notice read: “It is imperative to state that our client [Aneela Murtaza] has at no point in time ever had any relationship of whatsoever nature with Ms Manal Saleem, not of any sort of friendship nor as rivals you state to be colluded against you.

“To clarify further, our client has no nexus of whatsoever nature with Ms Saleem.

“Moreover, it may be noted that no innuendo and/or insinuation of whatsoever nature was and/or has ever been made by our client.

“The fact that your client believes the ‘innuendos’ to be targeted towards her show nothing but a presumption of falseness.”

The notice went on to call Sana’s notice an attempt to “seek publicity at the cost and expense of” Aneela Murtaza.

“Please note that as per Section 3 of the Defamation Ordinance 2002, in order to constitute the legal wrong of defamation, you need to prove that the statements were made by our client about your client [Sana Javed].”

Aneela’s legal notice denied the claims made by Sana, calling them “stories of presumptions and mere attempts to gain publicity”.

The documents concluded with a request to Sana to retract her captioned “malicious and malafide” legal notice within a period of seven days of the receipt of the notice.

Dhiren is a journalism graduate with a passion for gaming, watching films and sports. He also enjoys cooking from time to time. His motto is to “Live life one day at a time.”
Sara Ali Khan invests in Apparel brand The Souled Store
Urfi Javed sizzles in Tropical Printed Bikini