Bollywood superstar, Salman Khan enjoyed his 49th birthday with an extravagant bash. Friends and celebrities joined the star at his Panvel farmhouse to celebrate in style.

The Bhai of Bollywood Salman Khan has welcomed his 49th birthday with a weeklong birthday bash with his favourite celebrity friends.

Not one to celebrate without a bang, Salman retreated from his Mumbai Galaxy Apartments to his Panvel farmhouse on December 26th 2014, for a pre-birthday celebration.

The party saw a rumoured 500 guests attend including some of Sallu’s favourite celebrity friends.

It was also rumoured that Salman had hoped to keep it a small affair, but the majority of guests turned up simply to wish Salman ‘Happy Birthday’. 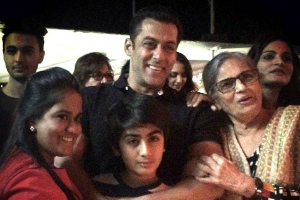 Arpita and sister Alvira went in search of Salman just before midnight struck so that he could blow out the candles of his healthy strawberry ‘cake’.

Parents Salim Khan and Salma Khan enjoyed the night on the veranda, and Arbaaz Khan sang ‘Happy Birthday’ in front of the crowd.

While Salman was given the day off from his Bigg Boss hosting duties, many of the reality TV contestants made an appearance at the farmhouse. 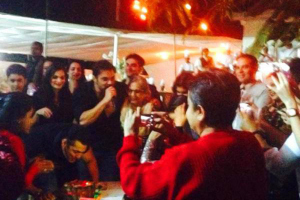 It was thought that Salman was hugely gracious to all those who attended, and didn’t let them leave until the early hours of the morning. He supposedly even joked with some guests about his age, saying:

Salman tweeted out a picture of his fruity birthday ‘cake’ from his family, the first of what is certain to be many cakes in the weeklong celebration.

Other pictures that made the rounds across social media showed Sallu blowing out birthday candles and photobombing his female guests.

Birthday cake pic for u . pic.twitter.com/eyRACm0XLN

The next day, Twitter wishes for Salman also poured in, with much of B-Town sending their love and regards to the birthday boy along with their favourite picture with the star.

Being the most eligible bachelor of Bollywood, there was no shortage of female attention either, with many of the big actresses tweeting Sallu throughout the day. Sonakshi tweeted:

“Happy birthday to @BeingSalmanKhan, Who has gone 10 steps beyond the original performance of o o jaane jaana last night. U the best!!!”

Jacqueline Fernandez added: “Love this man!! #salmankhan #happybirthday May God always bless you and your family!”

Of course the celebrations are far from over. A close friend to Salman reportedly said beforehand: “This time the celebrations will stretch for a week. We are leaving for Panvel on Friday night. We will be there till 3 January. So we’re celebrating Salman’s birthday and the new year.”

With a whole week of celebrations to now look forward to, we are certain that Salman Khan’s 49th birthday will be one to remember! Happy Birthday Sallu Bhai!

Aisha an English literature graduate, is a keen editorial writer. She adores reading, theatre, and anything arts related. She is a creative soul and is always reinventing herself. Her motto is: “Life is too short, so eat dessert first!”
Why 2014 was a great year for Bollywood
Worst Bollywood Films of 2014