Roop Kumar Rathod, one of the finest voices in Bollywood, accompanied by Sunali Rathod, will be entertaining audiences live on stage in the UK, courtesy of Saregama plc. At four concerts, the duo will perform some of ther most exquisite songs from the world of Bollywood to Ghazal.

Roop Kumar Rathod is the epitome of a complete artiste

After the success of Rafi Resurrected, Remembering Nusrat and Simply Rahat, Saregama proudly presents Roop Kumar Rathod, one of Bollywood’s most accomplished artistes in an evening of rare musical excellence. He was the voice of Shahrukh Khan in hit films Veer Zaara – ‘Tere Liye’ and Rab Ne Bana Di Jodi – ‘Tujh Mein Rab Dikhta Hai’ as well as a myriad of Bollywood hits including: ‘Maula Mere Maula’ from Anwar and the award winning ‘Sandese Aate Hain’ and ‘Toh Chalun’ from Border and many more. He has carved his own special niche in the world of music be it ghazals, sufi, light classical and playback singing.

Roop Kumar Rathod is the epitome of a complete artiste and has carved out a musical niche that spans Ghazals, Sufi, Light Classical and Playback singing as well as composing his own work. 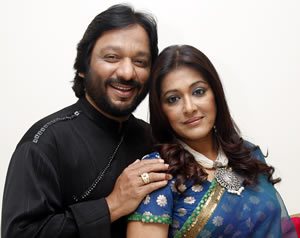 If that wasn’t enough, Roop Kumar Rathod’s talent extends to being one of the few tabla masters of his generation. Poetry is a passion for this amazingly gifted artiste who classes himself fortunate to have sung the verses of Ghalib, Mir Taqi Mir, Kaifi Azmi, Sahir Ludhianvi and Shakeel Badayuni.

This multi-talented vocalist will be accompanied on this landmark concert tour by his soul mate and celebrated singer Sunali Rathod. Sunali began her musical journey at the age of ten, under the guidance of Pandit Hridaynath Mangeshkar. In 1986 she was honoured with the Best Ghazal singer award for her debut album ‘Aaghaaz.’

Roop and Sunali have their foundation firmly grounded in Indian classical music, which enables them to effortlessly switch between various musical genres, be it a ‘geet,’ a ‘ghazal’ or a ‘tappa.’

Audiences have previously enjoyed music of a specialised genre; now they have the opportunity to enjoy music across the genres thanks to the versatility of these two artistes.

Amarpal Singh Gaind, Head of Operations – Europe, thrilled about the concerts says, “Saregama in the wake of three of the most successful concert tours of recent years (“Rafi Resurrected” with Sonu Niigaam and “Remembering Nusrat” & “Simply Rahat” with Ustad Rahat Fateh Ali Khan) is immensely excited at the prospect of bringing to audiences two immensely talented artistes. Once again we have chosen UK’s foremost venues across four cities for this production.”

“The range and diversity of music on offer whereby the artistes will enthral the audience with stirring Bollywood hits, popular Ghazals and vintage Golden Oldies is a path-breaking element in live entertainment and will undoubtedly satisfy the novice as well as the connoisseur.”

The tour comprises of four dates across different towns in the UK between October 24th – 31st 2010. Use the online links or telephone the box office number to book tickets for a venue most suitable for you:

This concert will bring the magic of one of the most popular voices in Bollywood today live on stage and is not to be missed. For further information please visit: www.saregamaevents.com.

Jas likes to keep in touch with the world of music and entertainment by writing about it. He does like hitting the gym too. His motto is 'The difference between the impossible and the possible lies in a person's determination.'
Honorary Degree for Gurdas Maan
Avina helps Southall Black Sisters