Jailed rapist Parvaze Ahmed has had his Facebook account closed after he was caught updating it less than a week after being jailed for 17 years.

Parvaze Ahmed, aged 36, of Bradford, has had his Facebook account closed after he updated it less than a week after being jailed for 17 years.

Ahmed was found guilty of three charges of rape at Bradford Crown Court on February 27, 2019.

He was jailed along with eight other men who had been grooming and sexually exploiting two vulnerable girls.

Ahmed is believed to have updated his Facebook account on Tuesday, March 5, 2019. His name appeared as ‘Jimmy Khan’ on the social networking site.

His account showed a photograph of himself and another man from September 2018 with the caption:

“Brotherhood. NO JUSTICE NO PEACE.”

Several of his friends were quick to like the post. One of them said he was “looking good”.

Concerned members of the public noticed the active account and alerted The Telegraph and Argus. They then contacted the Ministry of Justice.

One person said: “It’s not right he has a phone. His account should not be active to post anything after his crime.” 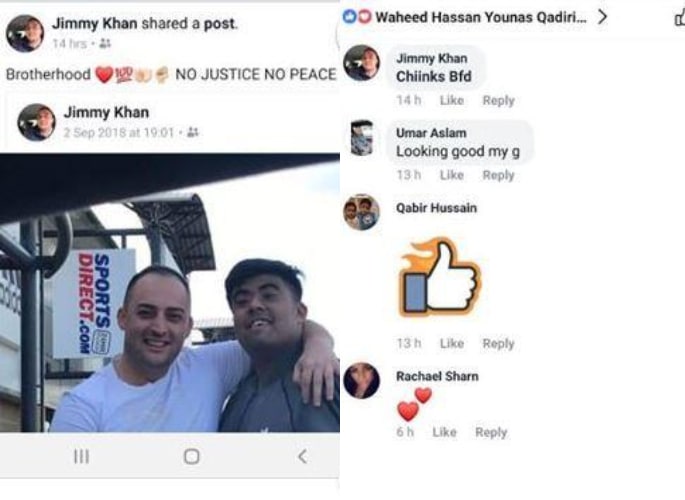 A Prison Service spokesperson said: “We do not tolerate the use of mobile phones in prisons and the account has been removed from Facebook at our request.

“Anyone found with a mobile phone faces extra time behind bars and we are spending £2 million to detect and block them from being used.”

“If he has access to his Facebook in prison and is able to contribute to social media, it’s pretty bad.”

“If it’s him updating from his prison cell then that really does smack in the face of justice and makes a mockery of the system.

“It doesn’t send out a good message. It’s pretty despicable.”

Philip Davies, MP for Shipley, has repeatedly spoken out about the criminal justice system. He said it would be disappointing for Ahmed’s victims to see.

He added: “It’s completely unacceptable and all it does is reinforce the public’s perception that the prison regime is too lax and out of control.

“It’s a kick in the teeth for the victims.

“I appreciate prisoners can be ingenious about how they get things into prison, but the current situation is unacceptable.

“Well done to the Telegraph and Argus for following it up and getting the account closed down, but we shouldn’t have to rely on newspapers to get this resolved.

“It should be something the prison service is on top of. These people are absolutely vile and prison is the only place for them.

“People believe and expect prison should be a punishment and this will only reinforce that prison isn’t the punishment it should be.”

Although nothing official has been announced, it is likely that Ahmed will spend more time in prison.

Dhiren is a journalism graduate with a passion for gaming, watching films and sports. He also enjoys cooking from time to time. His motto is to “Live life one day at a time.”
‘Turban Traveller’ Drives from Delhi to London in 131 Days
Indian Mother beats her Son sends Video to Ex for Money