Rani Mukerji has officially joined the Chopra household as one of their own after marrying Aditya Chopra in Italy. With rumours of the two together being media fodder for over a decade, the couple have finally confirmed their relationship.

"I have always believed in fairy-tales and with god's grace my life has been exactly like one."

Bollywood’s buxom beauty, Rani Mukerji has officially made public her love for filmmaker, Aditya Chopra. The pair married in a small and intimate ceremony on April 21st in Italy among close family and friends.

The couple first sparked romance rumours in the media since they met on the sets of Veer-Zaara in 2002. But while media speculation of Rani and Aditya’s relationship status was paramount, neither one confirmed the relationship.

Over a decade on and Rani has finally broken her silence, announcing her marriage to her long time beau in a small ceremony in Italy on Monday 21st April: 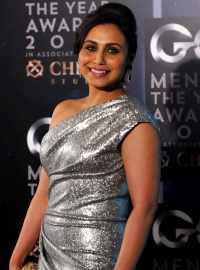 “I would like to share the happiest day of my life with all the fans all over the world whose love and blessings have been part of my journey all these years.

“I know that all my well-wishers who have waited for this day, will be really happy for me. It was a beautiful wedding in the Italian country side with just a few of our close family and friends with us,” Rani said.

Yash Raj Films also confirmed the nuptials in a statement, which read: “We are happy to announce that Mr. Aditya Chopra and Ms. Rani Mukerji got married last night on 21st April in Italy. The wedding was a very small intimate affair with very close family and friends. We wish the couple a very happy married life.”

Rani who is 36, has been a firm member of the Chopra family for quite some time, always being spotted out and about with them in good times, like Diwali where she was snapped feeding Aditya with her hands; and in bad – she was even at Aditya’s side when his father, Yash Chopra passed away in 2012.

Rani admitted that the great late filmmaker’s absence at the wedding was a huge sadness:

“The one person I missed terribly was Yash uncle but I know he was there with us in spirit and his love and blessings will always be with Adi and me.”

“I have always believed in fairy-tales and with god’s grace my life has been exactly like one and now as I enter the most important chapter of my life- the fair tale continues,” says Rani. 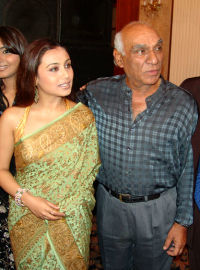 While Rani admits that her relationship with Aditya was a ‘fairytale’ one, when they first met on Veer-Zaara, Aditya was still married to his first wife Payal Khanna who was a favourite of Yash Chopra’s, and had in fact helped to design the glamorous YRF studios. The marriage however ended and Payal and Aditya eventually divorced in 2009.

For any celebrity who shies away from the spotlight when it comes to love and relationships, Rani has been the butt of many a media link-up over the years. She was thought to have shared a relationship with Aamir Khan when he separated from his first wife Reena, but Rani maintains that they are just good friends.

The most widespread link-up up was between Rani and Govinda, who were reported to have had a full-fledged affair in 2000, with Govinda gifting Rani an expensive car, diamonds and even a flat.

Abhishek Bachchan is another on Rani’s ‘love list’ with the two starring in films like Yuva (2004) and Bunty Aur Babli (2005) together, where their on-screen chemistry and close friendship was undeniable. However, we all know how that ended – with Bachchan going on to marry the stunning Aishwarya Rai. 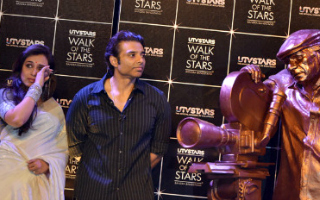 But even with hints from Rani and other Bollywood celebrities over the years there has been no actual confirmation until now.

The secret wedding has come as a big surprise for most of the Bollywood fraternity, most of whom had no idea that the marriage had taken place. However, since the news broke, Bollywood have shown their full support and have inundated the happy couple with messages of congratulations.

Shahrukh Khan tweeted his love and happiness for the couple, saying: “May Allah bless my friends Rani & Adi. May u enjoy the small things my friends for in the end they r the big things. Happy union…love you.”

Aditya’s brother, Uday Chopra also tweeted: “We welcome Rani Chopra to the family…lots of love to the newly weds.”

Karan Johar added: “And finally….Mr and Mrs Chopra….Love you both….”

Interestingly, reports also suggest that Rani and Aditya were actually planning a huge wedding celebration on Valentine’s Day in Jodphur. But the romantic atmosphere of Italy cannot be denied, and Rani and Aditya Chopra are certain to have made the perfect choice. Congratulations to the newlywed couple!

Aisha is an editor and a creative writer. Her passions include music, theatre, art and reading. Her motto is “Life is too short, so eat dessert first!”
2 States ~ Review
Chetan Bhagat’s 2 States a Novel Onscreen