Ranbir Kapoor’s sister Riddhima Kapoor is accused of copying a jewellery design. Riddhima who owns a jewellery brand has since apologised for the mix-up.

"If this is not #gutsontoast, we don't know what is!"

Ranbir Kapoor’s sister Riddhima Kapoor who had been called out for plagiarising a jewellery design has issued a public apology on her Instagram account.

The mother of one owns a jewellery line called R Jewelery by Riddhima Kapoor Sahni Jewellery.

Riddhima launched a festive jewellery range just in time for Christmas. This collection includes a pair of pearl and diamond earrings.

However, Kapoor was accused of plagiarism, after she mistakingly forgot to tag the original designer in the picture she uploaded of the earrings.

The collection is an inspiration from designs of Kokichi Mikimoto. But Ridhima did not put this information in her initial post on Instagram. 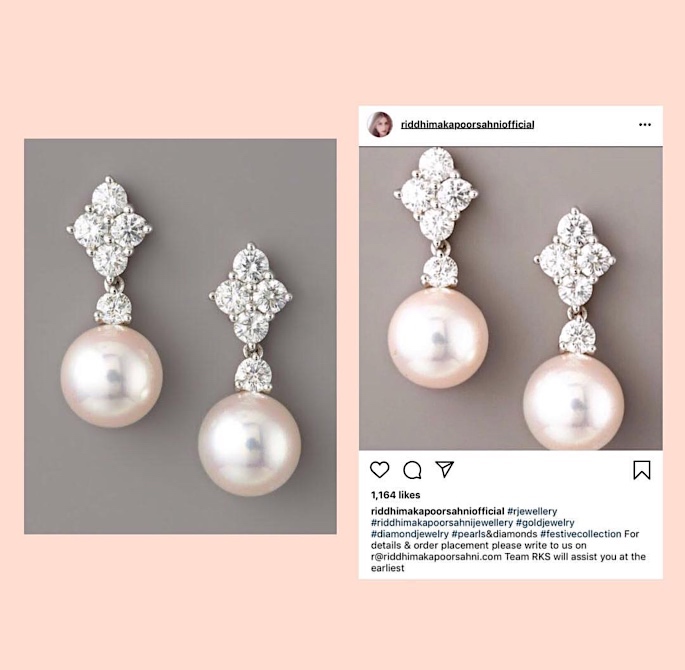 Instagram page Diet Sabya called out Riddhima for the designs, accusing her of copying the design of the earrings.

Diet Sabya put up a picture of the original Kokichi Mikimoto earrings next to the identical design by Riddhima. The page wrote a caption alongside it.

“The legendary Kokichi Mikimoto is known in the pearl world as the ‘King of Pearls’.

“His ‘cultured pearls’ —patented in 1916 — is a benchmark for the industry at large.

“So, naturally ‘Jewellery designer of the year’ @riddhimakapoorsahniofficial couldn’t help herself from selling the iconic Mikimoto pearl and diamond earrings under her namesake label.

In response to the accusation, Riddhima and her team put out a post on Instagram, clarifying the design was an inspiration from Kokichi Mikimoto. 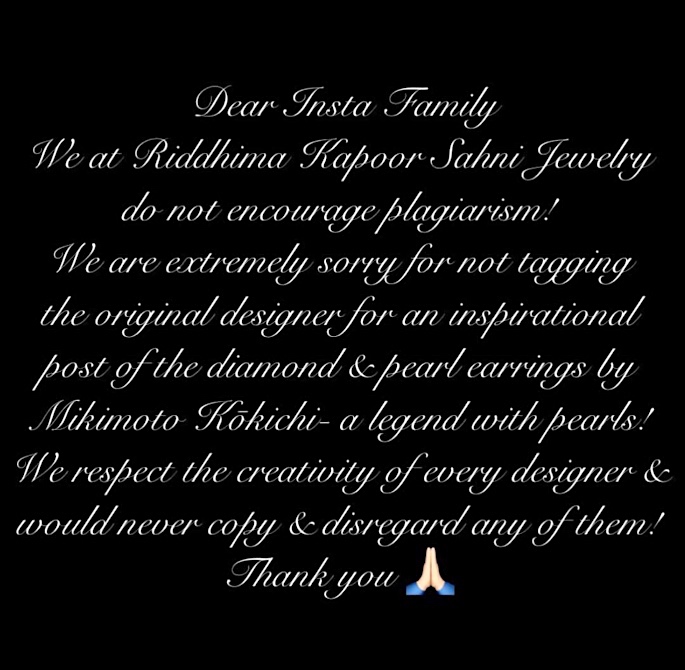 However, the team mistakenly forgot to tag the designer in it. The post reads:

“Dear Insta Family, We at Riddhima Kapoor Sahni Jewelry do not encourage plagiarism.

“We are extremely sorry for not tagging the original designer for an inspirational post of the diamond & pearl earrings by Mikimoto Kokichi – a legend with pearls!

“We respect the creativity of every designer & would never copy & disregard any of them! Thank you.”

Riddhima, daughter of Rishi Kapoor and Neetu Kapoor has always stayed out of the limelight.

Shunning the bright lights of Bollywood, Riddhima chose to focus on her jewellery brand instead

She married Bharat Sahni, a Delhi-based businessman 12 years ago. The couple are parents to 7-year old Samara Sahni.

In addition to her jewellery, Riddhima recently launched a children’s clothing brand. Naming it ‘Sam & Friends’ after her daughter, the range features plenty of glitzy outfits for kids.

The mother-daughter look great as they twin in matching ensembles. 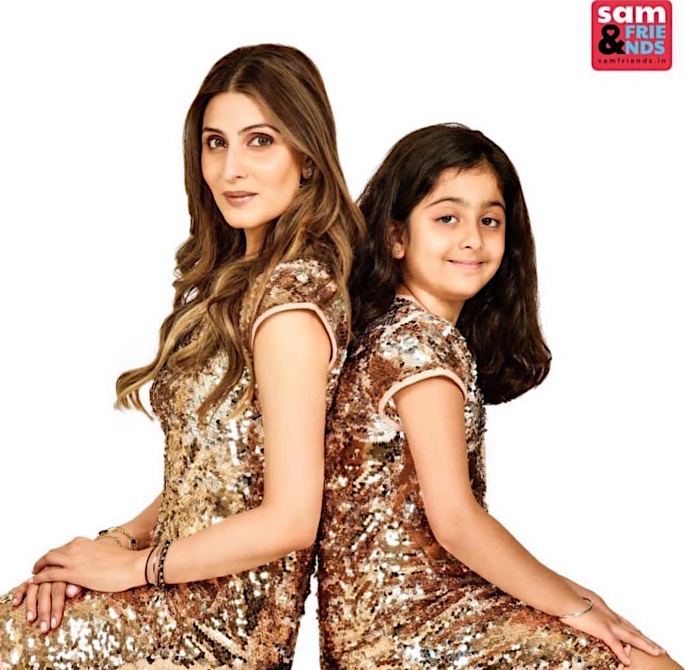 R Jewelery by Riddhima Kapoor Sahni has plenty of celebrity clients that buy and support the brand.

Riddhima also often gifts Bollywood stars with her designs. An emerald bracelet was given to actress Sonam Kapoor as a wedding gift.

Sonam shared a picture of herself wearing the bracelet on her Instagram story. She wrote:

“How gorgeous @riddhimakapoorsahniofficial,” alongside a heart emoji.

We hope that this plagiarism accusation does not affect Riddhima’s business. This was a genuine mistake on the part of Riddhima.

As the original post of the earrings has been taken down, no harm was done on this occasion.

Now that an apology and a clarification has come from Riddhima Kapoor, she can continue to flourish with her jewellery brand.

Television Beauty Hina Khan set to make her Bollywood Debut
2.0 Robot: 5 Things You need to Know about the Sequel