Priyanka Chopra shared her ‘It’s Tricky’ challenge and she was asked to choose between Hollywood and Bollywood. Find out her response.

The options left her at a crossroads

Priyanka Chopra has given her response when it comes to choosing between Hollywood and Bollywood.

The actress took part in the ‘Its Tricky’ challenge on Instagram.

The challenge requires people to choose between two options while Run-DMC’s ‘It’s Tricky’.

In Priyanka’s version, the actress sported a white crop top along with denim shorts. Meanwhile, her hair was kept loose.

Two options were presented on the right and left of the screen and Priyanka chose her option by dancing in the direction of her pick.

She also chose  ‘iced coffee’ over ‘hot coffee’, she stood with her arms extended over both the options of ‘hair conditioner’ and ‘hair masks’, she opted for ‘blow dry’ over ‘air dry’, ‘brush’ over ‘comb’, ‘coverage’ over ’embrace grey’, and ‘AM shower’ over ‘PM shower’.

The options left her at a crossroads and instead of picking, the actress said: “I quit.”

She captioned the reel: “Some questions are just better left unanswered.”

The video received over 270,000 likes and many of her fans loved Priyanka’s look and the video.

Priyanka’s video came a few hours after she told her fans that she had been injured while filming her upcoming series Citadel. 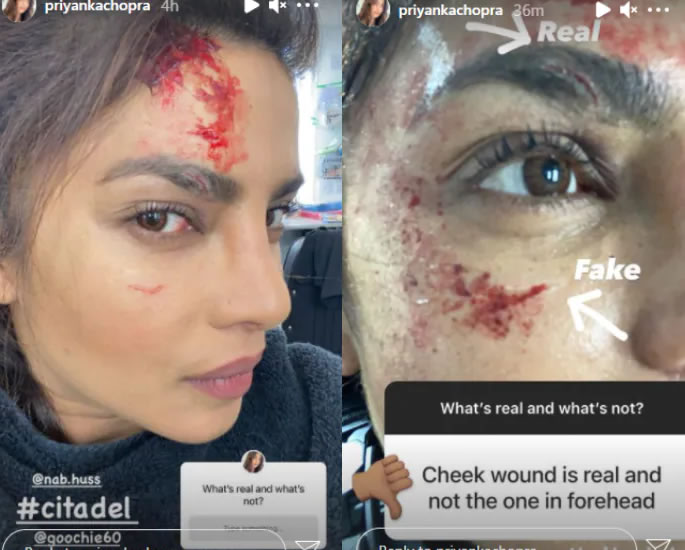 Priyanka Chopra shared a picture where she had a bloodied face and asked:

She later revealed that the blood marks on her forehead were fake while the cut on her eyebrow was real.

Priyanka is currently filming the series in London.

Citadel has the Russo Brothers as executive producers while Games of Thrones star Richard Madden will also star.

Priyanka will also be seen in Text For You, which includes Celine Dion and Sam Heughan in the lead roles.

Apart from that, she will also be seen in The Matrix: Resurrections as well as Jee Le Zaraa, which will mark her Bollywood comeback.

The film also marks Farhan Akhtar’s return to directing. Shooting will get underway in 2022.

Jee Le Zaraa will be a woman-centric film that will also star Alia Bhatt and Katrina Kaif.

Dhiren is a journalism graduate with a passion for gaming, watching films and sports. He also enjoys cooking from time to time. His motto is to “Live life one day at a time.”
Shweta Tiwari’s Daughter Palak says she’s Not a Star Kid
Sunny Leone & Husband to enter ‘Bigg Boss OTT’?