Billionaire diamond trader Nirav Modi has been arrested in London for fraud. This comes after a warrant for his arrest was issued.

"he will face an extradition hearing."

Indian diamond trader Nirav Modi was arrested in London on Tuesday, March 19, 2019, after a warrant for his arrest was issued.

The 48-year-old is wanted for his alleged role in India’s largest-ever bank fraud, totalling £1.5 billion.

He left the country in early 2018 and was spotted living in London in early March 2019. It was reported that Modi had been in London since June 2018.

Police said that the arrest had been made on behalf of the Indian authorities, who have asked for his extradition.

An Interpol red notice was issued on the request of the Indian authorities in July 2018 for Modi’s arrest. However, he continued to remain at large.

Indian authorities froze his business bank accounts but Modi was involved in a new diamond business run from an office in Soho.

He was tracked down to a three-bedroom flat in London where he was believed to be living. He had disguised himself and when questioned he simply replied: “No comment.”

The Home Office said earlier: “We can confirm that Nirav Modi was arrested on Tuesday 19 March in relation to an extradition request from India.

“Mr Modi will be taken to Westminster Magistrates’ Court today where he will face an extradition hearing. While the case is before the Court, it would be inappropriate to comment further.” 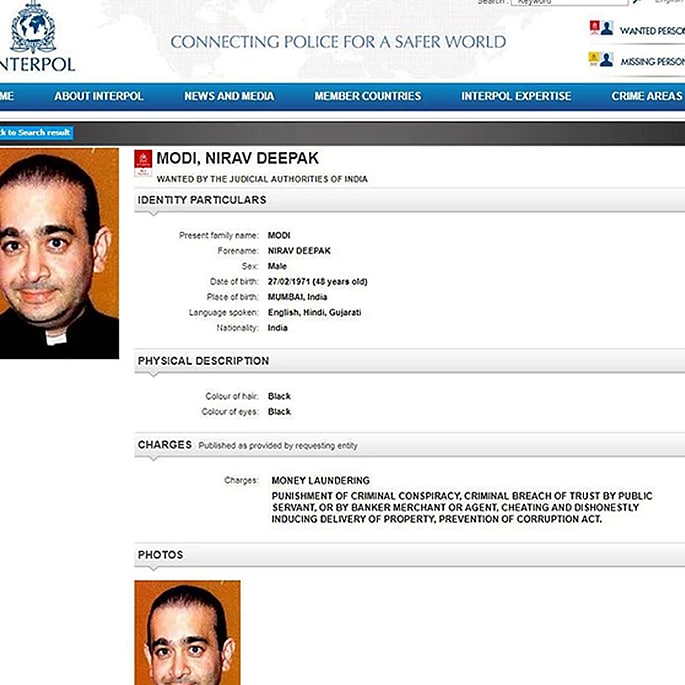 It was thought that Modi would be released on bail on the condition that he cannot leave the country.

However, he was denied bail and is to remain in prison until his next hearing on March 29, 2019.

Modi was told by the judge: “I am remanding you to custody, given the high value of amount involved in the allegations and the access you may have to means of escape.

“I have substantial grounds to believe that you may fail to surrender.”

Despite his accounts being frozen, Modi was given a National Insurance number by the Department for Work & Pensions and was able to operate online bank accounts in the UK.

Modi and several others were accused of defrauding the Punjab National Bank for £31 million.

They fraudulently obtained Letters of Undertaking for making payments overseas. This resulted in a huge financial loss for the bank.

The overall loss for the bank was in the region of £1.5 billion, making it the biggest banking fraud in India’s history.

Modi remains in jail until March 29, 2019, which is the first day of his extradition hearing in the UK. He can apply for bail again if he wishes to.

Dhiren is a journalism graduate with a passion for gaming, watching films and sports. He also enjoys cooking from time to time. His motto is to “Live life one day at a time.”
Saima Hayat and Two Friends jailed for Murdering Husband
Czech Model jailed in Pakistan for Drug Smuggling