A mother has complained of the “inhuman” conditions of a £3,000 quarantine hotel. The woman and her two children returned from Dubai.

"I never thought this would happen."

A mother has described the conditions of a £3,000 quarantine hotel as “inhuman”.

However, several flight cancellations and a 10,000-mile voyage meant they only returned home on May 25, 2021.

Shabana claimed that four days into her holiday, Etihad Airlines cancelled her flight to Manchester Airport, leaving them stranded.

However, her daughter became too ill to fly.

Shabana then arranged new flights for April 15, but contracted Covid-19 and had to isolate.

She eventually booked a flight to Heathrow on May 4. But she had to scrap her plans because all the quarantine hotels were full.

Shabana and her children then decided to stay in Istanbul for 10 days before being allowed to fly back to the UK.

Turkey was on the UK’s travel green list at the time. It was then added to the red list on May 7.

As a result, the family had to stay in a quarantine hotel in Luton upon their return to the UK on May 15.

“It has been a terrible ordeal. I have been away for over three months. I never thought this would happen.

“With Covid and being in lockdown, it had been a terrible year.

“My children and I were all really depressed and I thought getting away would be a great lift for everyone.

“That’s why we decided to get away. We’d only been in Dubai a few days when I received an email from the airline saying the flight had been cancelled.

“I kept calling and calling to see when flights would be running again and was told ring back.

‘This went on for weeks so I decided to look for alternative flights.

“We found some going to via Turkey but my daughter became ill and it would have been too much for her.

“Then I tested positive for Covid while still in Dubai, which delayed us again.”

Shabana revealed that being stuck in Dubai and her Turkey stay cost her around £7,000.

She said the worst part was her stay at the Holiday Inn Express at Luton Airport. She claimed that her family had to stay in a tiny room, costing £3,050.

When she complained to hotel staff, she was told to contact Corporate Travel Management (CTM) Ltd, which has the contract with the government.

Shabana said: “They were just blaming each other and were just playing games.

“We were in there for 10 days and nothing was done.

“We were treated really badly.”

As soon as their quarantine period ended, the family took a taxi from the hotel to their home, costing £180.

“We left as soon as we were allowed. I wasn’t spending another minute in that place.”

Shabana took pictures that showed two double beds inside a single room to accommodate the trio. 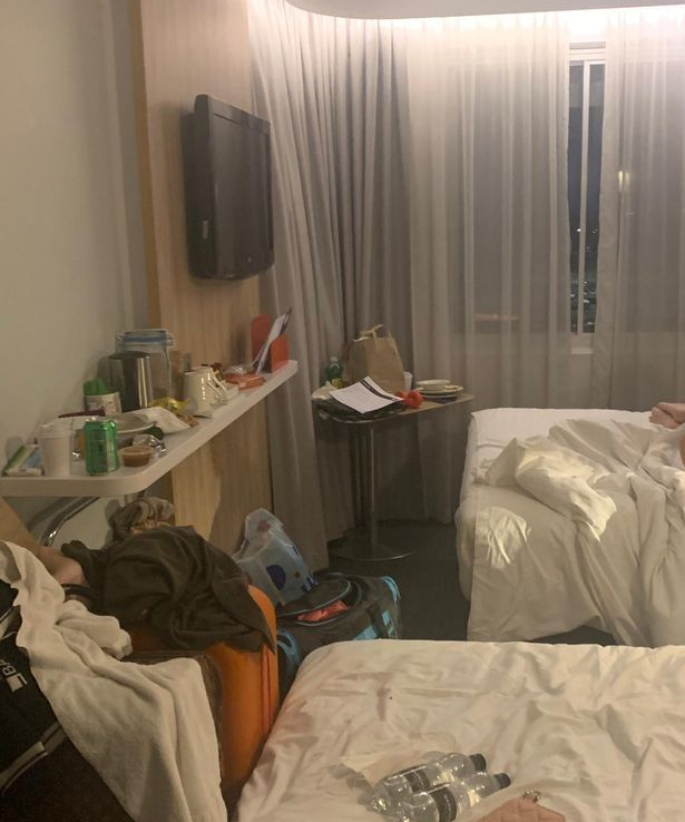 Due to the luggage taking up the floor, the family were forced to climb across a bed to get to the bathroom.

According to the family, they were permitted to leave their room for fresh air for only 15 minutes at a time.

Meals were provided, however, the Shahs said it was poor quality.

They said they had to spend more money on takeaways.

Shabana sent an email on May 17, which read:

“Why do me and my kids have to suffer? Saying sorry is not going to make it easy to stay here.

“I request you all come and live here and see how horrible the state of it is, I cannot believe of you all being so inhuman.”

A spokesperson for IHG Hotels and Resorts said:

“We are unable to share any comment as the approach to quarantine is a matter for the DHSC (Department for Health and Social Care).

“We would recommend liaising with the relevant Government media team who will be able to guide you on this.”

A DHSC spokesperson said: “Our top priority has always been protecting the public and our robust border regime is helping minimise the risk of new variants coming into the UK.

“The government continues to ensure every person in quarantine gets the support they need, and all managed quarantine facilities are accommodating the vast majority of people’s requirements.

“Hotels do their utmost to take any necessary steps to address concerns raised by guests.”

Dhiren is a journalism graduate with a passion for gaming, watching films and sports. He also enjoys cooking from time to time. His motto is to “Live life one day at a time.”
Amir Khan’s Mother undergoes Cancer Surgery
Faryal Makhdoom trolled after Photoshop Blunder