An entrepreneur has opened a curry house from a disused red phone box in London. He says it will be the “world’s smallest takeaway”.

"It gets attraction, and we make sure to give the best quality food"

An entrepreneur has transformed a disused red phone box into a curry house. It is the first of its kind as it is the “world’s smallest takeaway”.

Tayyab Shafiq, aged 25, set up his takeaway in a red phone box on Uxbridge High Street in North West London.

He has rented the three booths from the Red Kiosk Company, which works with BT to provide unused telephone boxes to local businesses.

Mr Shafiq said: “It’s the first of its kind as it’s going to be the world’s smallest takeaway.

“I thought it would be a great benefit to turn a place where people vomit on Friday nights into a useful thing.

“I discussed it with my landlord [who runs the Red Kiosk Company] and he agreed. I had all the professional cleaning and everything done and then started.

“From afar it looks like a small telephone booth but it has refrigeration, drinks, cookies, curries, biryani, samosas and kebabs.

“We have a washbasin too, and we had a full hygiene inspection with a good response.” 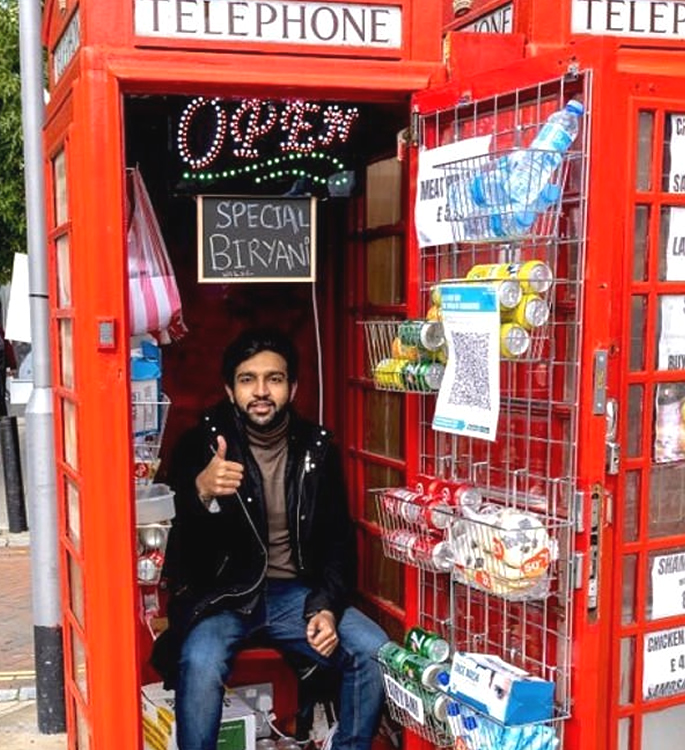 Mr Shafiq went on to say that he has regular customers.

He added: “We have a lot of regular clients who are part of the community. The plan is to scale up and open other places in London to make it a franchise, people are loving it.

“It gets attraction, and we make sure to give the best quality food, taking twice a day from a kitchen company and making sure health, safety and quality is maintained.

“It makes me sad when I see these telephone booths which have been used as toilets for people on nights out. I want to maintain this iconic British heritage.”

The Red Kiosk Company was created by two market traders who found two unused phone boxes by Brighton Pier. They asked BT if they could buy them to use as a kiosk for sunglasses and hats.

They now have 125 booths across the UK, including sites in Edinburgh, Leeds, London and Plymouth.

Eddie Ottewell is one of the market traders who helped come up with the idea of renting out unused telephone boxes. He told the Daily Mail:

“Most people use the booths as a coffee or souvenir shop, Tayyab is a little bit different and a bit of a one-off really.”

“We’ve refurbished it for him and the public love him, they think it’s great.

“I believe he’s been helping the homeless people too by handing out the food to them at certain points.

“He transformed the boxes and attracted loads of attention. We rent sites out from £5 a day and up to £50 a day on a long-term let.

“We’ve been inundated with enquiries since the lockdown, and we’ve ended up selling some of our sites so it’s been really good from the government’s view financial wise. It couldn’t have worked better for some of our tenants.”