A man led police on a 90mph pursuit through Birmingham. The chase only came to an end when Jamil Khan crashed and flipped over his Mercedes.

he refused to allow a blood sample to be analysed.

Jamil Khan, aged 35, of Smethwick, was jailed for 26 months on August 13, 2019, after he led the police on a dangerous chase in his Mercedes.

Birmingham Crown Court heard he reached speeds of 90mph as he tried to outrun police who had spotted him illegally racing. The pursuit came to an end when he flipped over the vehicle.

Just before 11 pm on July 23, 2018, Khan was spotted waiting in the Mercedes alongside a BMW at a set of traffic lights on Hagley Road, Edgbaston. The camera of an unmarked police car had caught him.

When the lights changed to green the cars sped off hitting speeds of 75mph.

However, the two drivers did not realise that an unmarked police car was behind them. Officers then followed them.

The officers caught up with the Mercedes on Broad Street where Khan briefly stopped. When they tried to speak to him, Khan sped off.

The driver went through a red light, undertaking a car on a roundabout and mounting a kerb as he hit 60mph in a 20mph zone.

He continued his attempt to evade the police and he reached 90mph. Khan maintained the speed for three minutes, putting the lives of countless drivers at risk.

Khan then overtook on a blind crest, colliding with a Ford Fiesta head-on and rolling his car on the canal bridge where it eventually came to a rest outside City Hospital. 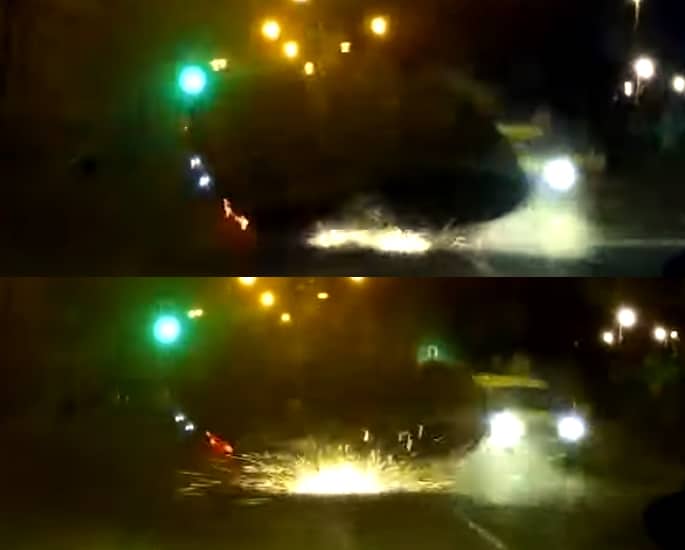 Khan, who was not wearing a seatbelt, was cut free from emergency services and taken to hospital to be treated for a head injury.

Both his front seat passenger and the driver of the Fiesta sustained minor injuries in the collision. The Fiesta was written off.

There was a strong smell of alcohol coming from Khan but he refused to allow a blood sample to be analysed.

He was found guilty of dangerous driving, failing to allow a sample to be analysed and disqualified driving.

Jamil Khan was sentenced to 26 months in prison. He was also banned from driving for four years.

After the sentencing, PC Dan Lynas, who pursued Khan, stated:

“This was appalling driving from Khan, who was lucky to escape from the collision that he caused with his life.”

“We welcome this sentence and hope it sends a strong message to drivers who are willing to put livings at risk by driving dangerously.”

Watch the Shocking Footage of the Mercedes Driver

Dhiren is a journalism graduate with a passion for gaming, watching films and sports. He also enjoys cooking from time to time. His motto is to “Live life one day at a time.”
Indian Boyfriend and Girl aged 15 held for Killing her Father
Indian Man wants Divorce after Wife Fed him only Laddoos