Malaika Arora has once again been targeting by online trolls for sharing a picture herself kissing her boyfriend Arjun Kapoor.

Ever since the duo confirmed their relationship, they have candidly expressed their love for one another. Their respective social media provides fans with a glimpse into their love life.

The excitement of the new year had everyone in Bollywood ringing in the celebrations either abroad or at home.

Malaika and Arjun jetted off to a romantic location to celebrate the new year together.

To mark the occasion, Malaika Arora posted a picture of herself planting a kiss on Arjun’s cheek on Instagram. 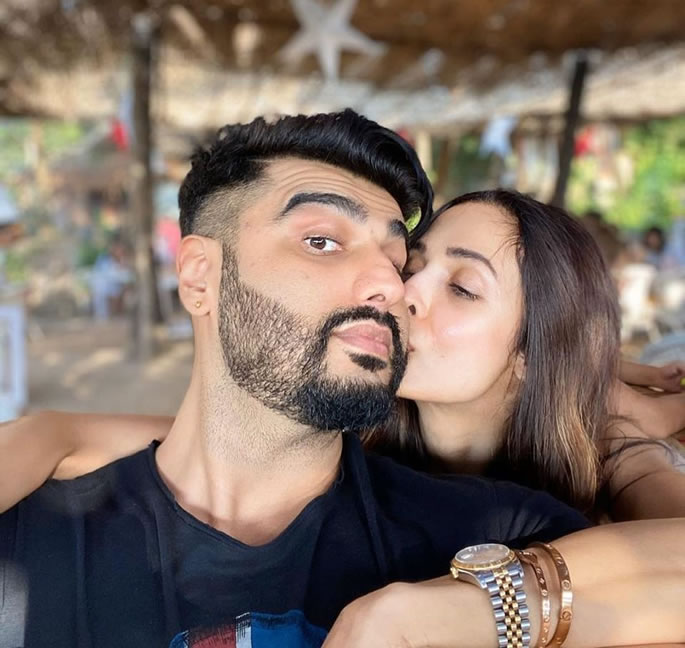 However, this seemingly adorable photo created a storm on social media with many fans criticising Malaika with horrid comments.

One user took to Instagram to condemn her relationship with Arjun saying:

“Malaika y to insult ur slf by posting such pic…. ?????? Ur relationship is wired not like ordinary. Couple. Once he was ur ex sis in law ‘s bf…n U were bhabi to him…n despite of age gap n generation gap. U both have many other problems.”

Other users joined in the mocking Malaika Arora for being older and in a relationship with a younger man.

One person said: “Auntie enjoying” while another called them a “Mother-son Duo” and asked whether “Is it Mother’s Day?”

The belittling comments continued as a user targeting Malaika’s age and character. The user said:

“Madam ur hair is all white inside I see it every day when u come salon. Ur delusional u can’t hide your real 50 years forever buddhi. Why u still act and dress like randi.”

The nasty comments went on to refer to Malaika Arora as an aunty.

The stereotypical ideas of divorced women being in a relationship are scorned. One user said:

Malaika and Arjun are often targeted by trolls for their twelve-year age gap yet the stars do not let it affect them.

According to an earlier interview, Malaika Arora explained how she does not pay attention to negative comments. She said:

“No one should give importance to trolls, because if you pay heed to them you just fuel trolling.

“At the end of the day, we have something called the media to project everything that needs to be out there. I do not give trolling or negativity any importance.”

Malaika Arora and Arjun Kapoor are enjoying their blossoming love and are certainly not allowing the criticism to get in the way.