The Late Madam Noor Jahan is considered as one of the greatest female vocalists of South Asia. A popular actress, filmmaker and playback singer, her melodious voice is still cherished by millions.

"How did music enter my life? Well, when I came into the world, I suppose."

Among all the glories of British India, the legendary Noor Jahan (Noor Jehan) was one diamond among millions.

Noor was a renowned and prestigious singer of Pakistan, India and South Asia. Her delicate and angelic voice earned her the elegant title of ‘Malika-e-Tarannum’, or Queen of Melody. A fitting title for her perfect voice.

Her singing career spanned an outstanding seven decades, from 1930 to 1996. Music was in Noor’s blood; she was born in Bulleh Shah’s Kasur, Punjab in 1926, to a family of musicians. 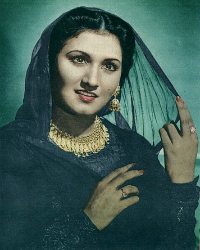 Realising her keen interest and amazing talent, Noor’s parents sent her for classical singing lessons to Ustad Bade Gulam Ali Khan, who was also from her hometown, Kasur.

In a memorable BBC interview from the early 1990’s, Noor said:

“How did music enter my life? Well, when I came into the world, I suppose. I’d hear a song once and I’d repeat it straight away imitating the style of the singer. At the age of six, I formally became a music student.”

Interestingly, Noor as a young girl was more interested in pursuing acting rather than singing. However, her musical family encouraged her to go into the singing field where she inevitably found success.

At the age of nine, she wowed a Punjabi singer Ghulam Ahmed Chishti, who was inspired by her talent.

He took her to Lahore and gave her first big platform to preform along with her sisters. She started her career by singing in live concerts and dance performances prior to her acting career. 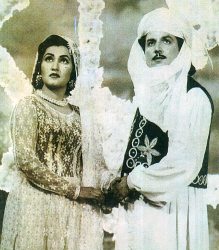 Following Noor and her sister’s successes, and financial earnings, their parents moved to Kolkata for a better life.

It was here in Kolkata that they were introduced to another renowned singer, Mukhtar Begum who encouraged Noor to join the film industry. It was at this point that Noor shed her birth name, Allah Wasai and donned ‘Baby Noor Jahan’ instead.

From here, the glorious victory of this legend began. She found instant success and won the hearts of all the audiences that she sang to, who became enamoured by her sweet and melodious voice.

In 1935, Noor starred in her first film along with her sisters at the age of 9, called Pind di Kuri. It was directed by K.D Mehra. She then sang and acted in Missar Ka Sitara a year later.

In 1942, she played her first leading role as an adult in Khandaan which was a huge success. She met director Syed Shaukat Hussain Rizvi and married him a year later after moving to Bombay.

In 1945, she played the lead in Bari Maa, alongside Lata Mangeshkar and Asha Bhosle. It was in this year that she recorded a qawwal for the first time called, ‘Aahen Na Bhareen Shikave Na Kiye’. This was the first to be recorded using a female voice for an Indian film. 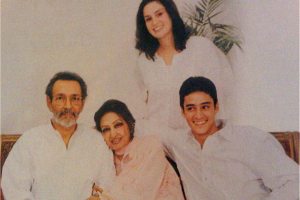 In 1947, she starred with Dilip Kumar in Jugnu. Her last film in India was Mirza Sahibaan also in 1947. By this point she had sung 127 songs and starred in 69 movies.

After the creation of Pakistan, she and her husband moved to Karachi where they settled. Her acting remained a priority and in 1951 she starred in her first Pakistani Punjabi film called Chan Wey opposite Santosh Kumar.

It was this same film where she also became Pakistan’s first female director. This was rather a big achievement for her as well as for the Pakistani cinema and film industry and showed off Noor as a highly multi-talented lady.

Madam Noor Jahan was certainly a precious diamond in the Pakistani media and film industry. She was an inspiration for many women of that time, not only in Pakistan but all over the Asia. 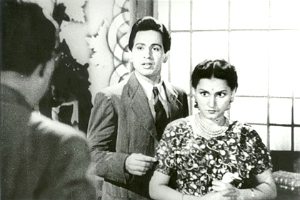 Her penultimate film was Mirza Ghalib in 1961. The film is an iconic one and it gave her the opportunity to branch out to other audiences who loved classical poetry.

Interestingly, Noor recalls that she was initially not allowed to sing the song by Pakistani officials at a charity concert, but her stubbornness meant that she got her way in the end:

“I was surprised. It was my favourite poem and I had composed the tune myself. I refused to go along with them. Why were they against the song?

“Mr. Faiz was in prison at the time, in some kind of trouble. I sang the song and it became very popular. The first time they heard it, the whole audience stood up.” 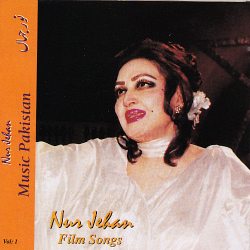 Later, Noor recalls that Faiz Saab came to meet her: “He said he had only come to thank me for having the courage to stand up for him against so many people. After that Faiz was asked to recite that poem in many poetry meetings, but he would say that it belonged to Noor Jahan.”

Her final film was in 1963, called Baaji. Following this, she quit acting to look after her six children and be with her second husband, Ejaz Durrani.

She returned to her musical roots and began playback singing. Some of her most famous duets were sung with Ahmed Rushdi, Mehdi Hassan, Masood Rana, Ustad Nusrat Fateh Ali Khan and Mujeeb Aalam.

Madam Noor Jahan developed some great relationships with many Indian singers, from the likes of Dilip Kumar, Lata Mangeshkar and Asha Bhosle. Lata ji has always held Noor in the highest regard, whom she first met at a very young age:

“As for Lata ji, people say she has great admiration for me and sees me as her mentor. I think that is her greatness: Lata is Lata! I feel there’s never been anyone like Lata, as yet,” Noor insisted.

In 1982, Madam Noor Jahan visited India and met the Indian Prime Minister. She was received by Dilip Kumar and Lata Mangeshkar. In a very special recorded conversation between Dilip Kumar and Madam Noor, Dilip Saab said:

“You are a cultural asset of Pakistan, but the magic of your voice is universal. Those who understand Eastern music really appreciate it. In your style of singing, there is such a vast range. It has a mixture of your carefree style, childhood, uniqueness, love and beauty, and happiness and sorrow.”

Noor Jahan was not a typical singer; she sang her songs with her heart, soul, deep emotions and a peace of mind. All these things together made her songs unparalleled and unique among all singers.

On December 23, 2000, Noor suffered a heart failure and died. She was buried at Gizri Graveyard in Karachi. Her death was a huge loss to both nations and she is remembered lovingly for her melodies even to this day.

The sweetness of her voice, and the emotions of her melodies still bring tears in the eyes of the listeners; and her songs have still enough power to capture millions of heart. She will always remain alive in her songs and in millions of hearts forever.

Aisha is an editor and a creative writer. Her passions include music, theatre, art and reading. Her motto is “Life is too short, so eat dessert first!”
History of the Sitar
The Rise of Asian Underground Music