Kuntal Patel has been cleared of a Breaking Bad style murder ploy to “get rid” of her disapproving mother. She was found guilty of acquiring a biological agent or toxin.

"I was thinking through it as if I was in my own TV programme or a character in Breaking Bad."

Kuntal Patel has been found innocent of a Breaking Bad style murder plot to poison her mother.

Patel was accused of mixing the lethal ‘abrin’ toxin in her mother’s Diet Coke.

The Jury found Patel, 37 guilty of acquiring a biological agent or toxin, but discredited alleged attempts to use it to kill her mother, Meena.

Jurors were told of a strained relationship between the pair, after Patel’s mother “forbade” her from marrying boyfriend, Niraj Kikad. 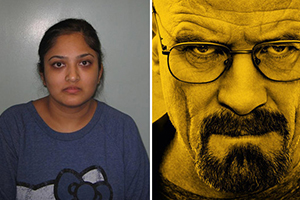 The court was also told Patel was beaten, locked in their home and had her passport and credit cards confiscated by her disapproving mother.

However, Patel had claimed she would never harm her mother, and acquired the toxin on the “dark web” to take her own life because she was suicidal.

In a police interview, Patel said: “I never wanted to hurt my mum. I have hurt her enough. There is no way I wanted to live without my mother.

“I don’t have much family, and she is my family. Because I was torn in both directions I thought I would take my own life.”

Patel admitted to jurors that she was in a “strange place” in her mind. She said: “It was as if I was thinking through it as if I was in my own TV programme or a character in Breaking Bad.”

The court heard of emails Patel had sent to a poisons dealer in America. In one email sent December 2013, Patel expressed that something must have “gone wrong” because the “target drank all” of the poison but was still alive.

She wrote: “Something has definitely gone wrong somewhere as it is now early Saturday morning and still everything is normal.

“Yes, target drank all of it. I made sure I watched her drink it all. I had to borrow money from friends to get this stuff from you because it’s my last option. 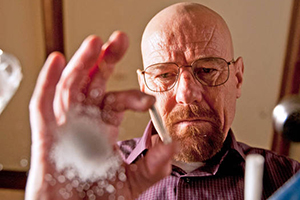 “I can’t be with the man I love because my mother doesn’t like him. She is a bitter, miserable old woman and has been physically mean to me and my sister.”

However, Patel told the court the emails were a fantasy. She described the fabrication as a “coping mechanism.”

“But I was living this other life. This was my own way of coping – it was my coping mechanism. It was how I survived daily.”

Jurors heard Ms Patel arranged for the drug to be delivered to her close friend Julie Wong, hidden inside a candle. However, Patel said she became “scared” and decided not to kill herself, smashing the glass container containing the toxin.

The toxin is said to be more poisonous than the infamous ricin, seen on Breaking Bad.

Prosecutor, Jonathan Polnay claimed the alleged attempted murder was “inspired, in part, by the US television series,” where a character is killed off using the deadly poison.

It took the jury just over three hours to reach the verdict. Although Patel has been acquitted of murder, she is to sentenced on November 7th 2014, for having acquired the toxin.

Zak is an English Language and Journalism graduate with a passion for writing. He is an avid gamer, football fan and music critic. His life motto is “Out of many, one people.”
DVLA Tax Disc now renewed Online
Ex-cop Osman Iqbal caught in Prostitution racket