Kartik Aaryan has shared the motion poster of his upcoming project ‘Dhamaka’, with fans on his 30th birthday on November 22, 2020.

Kartik Aaryan, who is celebrating his 30th birthday on November 22, 2020, has announced a new project titled Dhamaka (2021) on the occasion.

The motion poster of the film features Kartik Aaryan in an all-new hairstyle and a bespectacled look.

The poster shows a suited up Kartik Aaryan, looking at a burning bridge in front of him.

One more said: “Uff your look!” 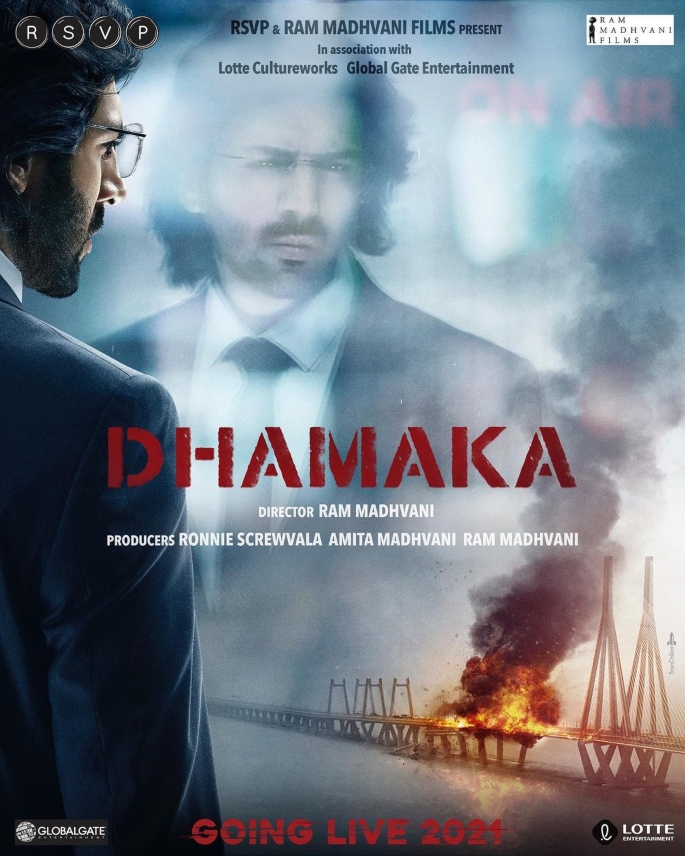 The film will be based in Mumbai and is all set to go on floors this December.

It will give a bird’s eye view into the workings of a news channel in the 21st century.

Talking about playing a journalist who covers the live broadcast of a terror attack in Mumbai, Kartik Aaryan said:

“This for me is a miracle script and had me on the edge of my seat all through the narration.

“I knew this is the script that would give me the opportunity to explore a different side of me as an actor.

“I can’t wait to transport myself to Ram sir’s world and see his vision translate on the big screen.

“This is also the first time I am collaborating with Ronnie and RSVP, and I am looking forward to this journey.”

Opening up about the film’s concept, Ram said:

“As a director, I am inclined towards human stories.

“Though this one is a thriller on the outset, there lies a lot of emotion and drama in the screenplay that leads to the adrenaline rush.”

“This film demanded a young actor, with a certain amount of rawness in the space. Kartik, being one of the most talented actors in Bollywood, fits the bill.”

He admitted that shooting in the midst of coronavirus pandemic will be challenging:

“But I have a terrific backing from my producer, Ronnie Screwvala, and our production teams at RSVP and RMF, are all well versed with the covid protocols.

“As a director/ Producer I will be abiding by the rules as laid down by the government and am eager to get back to filming.”

Akanksha is a media graduate, currently pursuing a postgraduate in Journalism. Her passions include current affairs and trends, TV and films, as well as travelling. Her life motto is 'Better an oops than a what if'.
Television Star Kid Palak Tiwari set to make Bollywood Debut
Ali Fazal says ‘Indian Cinema is Not all Bollywood’