Sara Ali Khan and Kartik Aaryan’s film gets a Title?

Fans have been eagerly waiting for Sara Ali Khan and Kartik Aaryan’s film to release. It now looks like Imtiaz Ali’s film has finally got a title.

"I think he is damn cute yaar."

Ever since it was announced that Sara Ali Khan and Kartik Aaryan would be coming together, fans have been excited and now it looks like the title has been revealed.

The two rising stars have been in the headlines since being cast as the lead roles in Imtiaz Ali’s project.

There were many reports suggesting that the film would be a sequel to the 2009 film Love Aaj Kal, starring Deepika Padukone and Saif Ali Khan.

There was no confirmation on whether the new film is a sequel or not. However, according to reports, the name of the film has been revealed as Aaj Kal.

While this is not an official confirmation, fans cannot help but notice the similarities and some are concluding that it is a sequel.

This has fans excited as they are eager to see the onscreen chemistry between Sara and Kartik.

They have had a glimpse when a video was leaked of the two on set in a club setting. They are then slow dancing before sharing a passionate kiss.

The footage highlighted good chemistry between the two and there has been speculation about the two off-screen.

It is no secret that Sara wants to date Kartik after she revealed all on an episode of Koffee with Karan 6. When asked about him, she said: “I think he is damn cute yaar.”

Both Sara and Kartik have been asked about each other during several interviews and press events. Karan Johar also introduced the pair to each other at an event.

Kareena Kapoor also gave her opinion on her stepdaughter’s desire to date him. She said:

“He’s wonderful. They’ll make a good pair. They’re planning to do a film together. He’s massy, and she’s classy.”

As for the film, sequel or not, fans can rejoice as the title has been revealed and are looking forward to what is in store.

Production has been completed and the filmmakers even revealed the first look of Sara and Kartik as a couple in the film. 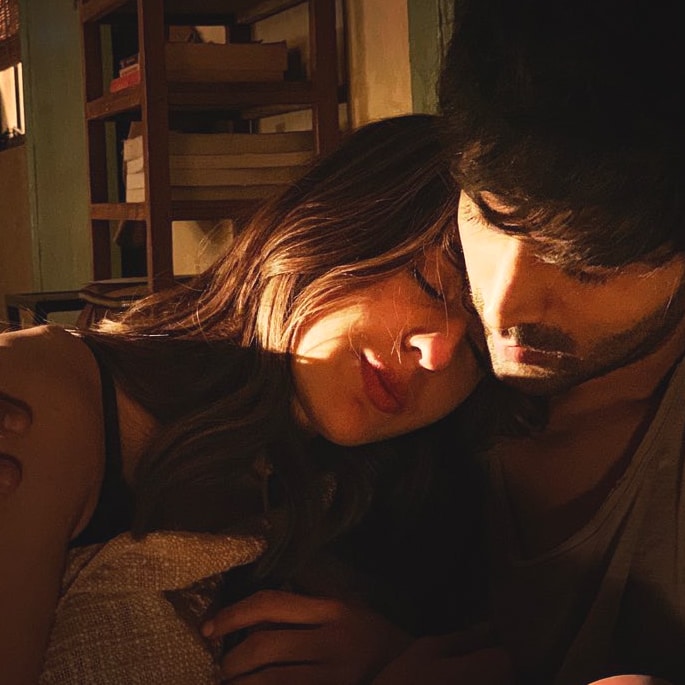 There had been rumours that Saif would be part of the film but the actor confirmed that he will not be.

While it has not been officially announced as the sequel to Love Aaj Kal, fans are looking forward to the on-screen performances of Kartik and Sara.

The film is set to release on Valentine’s Day 2020 and is certain to have the attention of many.

Dhiren is a journalism graduate with a passion for gaming, watching films and sports. He also enjoys cooking from time to time. His motto is to “Live life one day at a time.”
Taimur on Cookies proves his Popularity as a Little Star!
‘2 Band Radio’ set for World Premiere & BCU Screening