Kalpana Shah, a professional sari-draper, unveils her new book, The Whole Nine Yards. It is an extensive guide into sari wearing and styling, vital for any sophisticated and elegant woman.

"This is one of the most exciting phases of my life."

Kalpana Shah is a former Indian beautician turned sari draper. She is classically trained in kathak dance as well as Indian classical singing. She is now a stylist to Bollywood stars, supermodels, and other high-class dignitaries.

Her coffee table book, The Whole Nine Yards, offers an encyclopaedia into sari making, recreating its traditions and revisiting Indian women’s natural identity. DESIblitz had the pleasure of catching up with Kalpana to discover more about the art of sari draping.

Why did you become a sari draper?

“It all started with a dream to be different and carving an identity for oneself. Belonging from a simple family of jewellers in Surat, at the age of 10, my family and I shifted to Mumbai, to explore the city of opportunities.

“Over the years; I would wonder at the women spending a lot of time and effort in purchasing saris but very little time in understanding the drape that would suit them actually enhancing the beauty of a woman irrespective of the value of the sari. 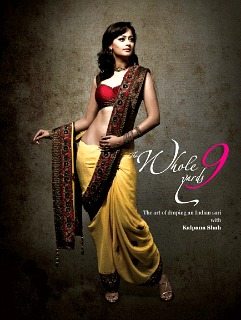 “With the growing number of clients and individuals starting to appreciate my skills set which then transformed to becoming an art of sari draping, I realised the need of creating the awareness of sari as a culture which was required to be restored.

“With this thought I started exploring new styles of draping that would be easy for women across ages to adapt.”

What was the inspiration behind The Whole Nine Yards?

“Sari draping has been a part of our rich culture and heritage, a legacy which each mother passes on to her daughter. I wanted to carry this inheritance forward through my coffee table book, The Whole Nine Yards. The book was launched with an aim to expose the Western world to grace of the sari as attire and its simplicity, flowing grace and the endless styling options that it offers.

“Sari draping always intrigued me and The Whole Nine Yards is my journey of exploring the mystic behind this eternally fashionable garment, which has been published to share with the audience in India and globally.”

Do you feel as though the tradition of sari wearing is being lost across India?

“There has been an evolution of fashion in India with the ever increasing global exposure of various attires and fusion of garments. Personally I’m extremely ecstatic as it has given my skill set a new dimension for innovating with the whole nine yards, a piece of cloth which totally inspires and innovates each time I have draped on any women.

“Youngsters are more explorative towards newer draping techniques that suit their tastes and preferences. The sari is an inseparable part of an Indian woman, so despite spending years in the carefree uniformity of jeans they still crave for the glamour and mystery of the traditional sari for special occasions.”

“The only concern is the understanding of this garment amongst the new urban audience as being complicated and difficult to carry hence have listed some simple tips for my audience so that the culture and interest towards the sari as an attire remains.” 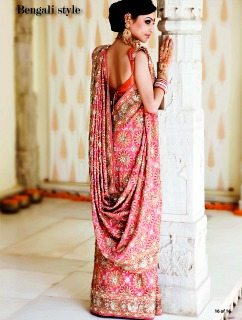 What does the sari signify in terms of Indian heritage?

“The sari has defined Indian womanhood for over 5000 years now. Every woman in India embraces it like as an inheritance from her mother/grandmother. An eternally fashionable garment and elegant drape defines an Indian woman completely.

“India is a rich amalgamation of diverse culture, each of which has its own speciality and intricacies. Sari draping is one attribute which is common yet unique to all the cultures.

“It is integral that we understand the significance of this woven heritage and explore its legacy across traditions.”

Do you believe that sari draping is important for female empowerment in India?

“A well draped sari exudes confidence, grace and character of a woman as an individual. The significance of attire in your professional and personal lives have been widely spoken and written about, but sari has been for many centuries being used as an attire of empowerment and independence of a woman.

“Today we see women in the top management swearing by this attire and running large businesses. It is time the youngsters understand the impact of the attire more than just being identified as a difficult attire to wear.”

Do you believe that the sari can be adapted to suit modern India, and new fashions?

“It is said that the beauty of a sari not only lies in its fabric, designs and patterns but in the way it is draped. The sari is a classic piece of cloth that can be draped in a number of innovative ways to adapt and suit the sensibilities of modern India. These novel drapes not only accentuates a women’s beauty but also emphasises the contemporary designs and patterns.”

Who have been your biggest clients?

“Just to name a few, I have had the opportunity to drape young beauties like Deepika Padukone, Kareena Kapoor, Sonam Kapoor and the wives of various large industrialists from Mafatlal, Hinduja and Ruia.

“Apart from that I have been giving workshops at various institutes across India and personal workshops to spread the awareness of sari draping as a concept across various touch points.”

Do you believe that every woman can learn to drape a sari?

“In my mind a woman has this enormous quality of perfection and adaptability, hence it is just a part of our DNA to learn new art forms making sari draping not that difficult.

“The sari as a garment is synonymous to women, nothing can beat the grace that a sari adds to a woman. This six yards wonder can be styled in novel ways to suit every occasion and looks trendy irrespective of one’s body type and age.”

For Kalpana, the chance to bring women closer to their rich sense of heritage and worth is mandatory. She describes herself as “atypical, passionate and rooted”. “This is one of the most exciting phases of my life,” Kalpana adds.

Her book, The Whole Nine Yards offers its Indian and global audience the glamour and elegance of unstitched garments. Through doing so, she unleashes the bold and vibrant personality of the modern woman who is both charismatic and beautiful.

Aisha an English literature graduate, is a keen editorial writer. She adores reading, theatre, and anything arts related. She is a creative soul and is always reinventing herself. Her motto is: “Life is too short, so eat dessert first!”
Yen Designs International Oozes Bridal Couture
Rajasthan Fashion Week 2013