Jacqueline Fernandez is Mermaid for Halloween in Sheer Gown

Actress Jacqueline Fernandez broke the internet with her costume for Halloween.

Jacqueline turned into a mermaid with the help of a silver, bodycon gown and tiara.

The photos have since gone viral and have amassed over 590,000 likes.

In the photos, Jacqueline can be seen wearing a round-neck, sheer bodycon gown that is embroidered with a combination of coloured sequins and Swarovski crystals.

The gown is complete with a mesh tulle base and full sleeves.

Jacqueline’s figure was perfectly accentuated as the gown hugged her in all the right places. 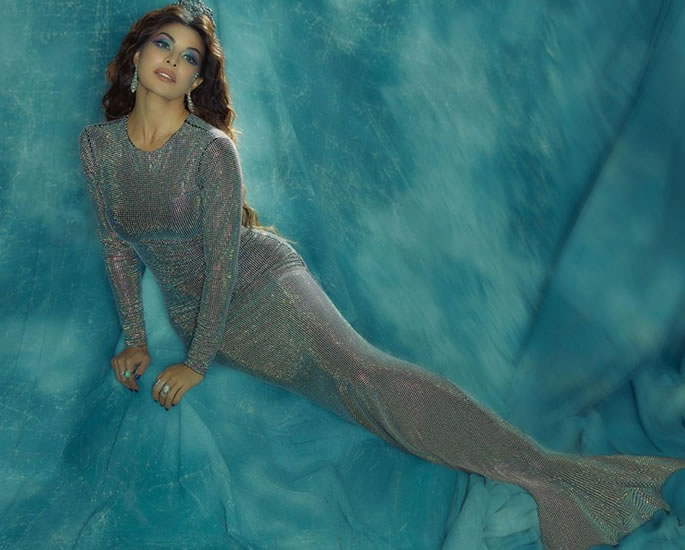 The bodycon gown ended in a small train that replicated a mermaid’s tail.

Jacqueline accessorised her Halloween look with rings and a pair of long, sparkly earrings from Amrapali Jewels, as well as with a delicate tiara.

The actress’s long hair was styled with a centre-parting and loosely curled.

Jacqueline is a fan of makeup and is the face of Colorbar Cosmetics.

She joined forces with the makeup brand in September 2021 to create a collection of various makeup products.

Speaking about the collaboration, Jacqueline said:

“I believe that makeup gives you the freedom to express yourself without any boundaries, and it has the power to take your spirits up simply by a tint.

“I am a makeup fanatic and have travelled across the world but my all-time favourite brand remains Colorbar.”

Therefore, the actress couldn’t complete her Halloween costume without a bold makeup look.

She captioned the photos:

“Happy Halloween everyone! I hope you stay your craziest, weirdest self!!”

Yousef’s label is recognised for its extravagant style including heavily-embellished dresses and puffy ballgowns.

On the work front, Jacqueline has many projects in the pipeline including Attack with John Abraham and Cirkus with Ranveer Singh.

The actress will also be making her debut in the Kannada film industry with Vibrant Rona.

A Bhoot Police sequel is said to be in the works.

Ravinder is a Journalism BA graduate. She has a strong passion for all things fashion, beauty, and lifestyle. She also likes to watch films, read books and travel.
Netizens troll Sabyasachi’s new Mangalsutra Advert
7 Top Indian Fashion Models You Need to Know