Is Rakhi Sawant the Funniest on Bigg Boss 14?

Bollywood actress Rakhi Sawant has returned to Indian reality show Big Boss 14. See some of her funniest moments this season.

“I went bankrupt in life and lost everything in life"

Bollywood actress Rakhi Sawant is returned as a contestant on the Indian reality show Bigg Boss for its 14th season.

Previously, Rakhi Sawant had been a part of the very first season of Bigg Boss, making herself a household name in India.

From Rakhi Sawant’s very first appearance in the Bigg Boss house in 2020, she has been hailed as a breath of fresh air for the season.

Rakhi has delivered some of the funniest, most adorable lines in the show.

Rakhi Sawant began entertaining everyone the moment she entered the house.

In an interview, the Bollywood actress has attested that she asked Bigg Boss’s host Salman Khan’s brother Sohail Khan for an opportunity in Bigg Boss.

“Sohail bhai (Khan) helped me a lot. I had messaged him that bhai I want to work in the industry and want to do Bigg Boss.

“I am not confident but the way things happened I feel he might have passed my message.”

Rakhi said that she has made ‘mistakes’ in life, because of which she went bankrupt.

She said that she hopes to get more work after her Bigg Boss stint.

Rakhi continues: “I went bankrupt in life and lost everything in life and now Bigg Boss is my opportunity to shine.

“I want to make a place once again in everyone’s heart and work in Bollywood.”

So far Rakhi has definitely made a splash on the Bigg Boss screen, she has taken digs at the majority of the other contestants in the house.

Rakhi’s threats to Bigg Boss 14 contestant Nikki Tamboli has been highly praised and circulated on Twitter:

Rakhi has signalled out fellow contestants Kashmera Shah and Arshi Khan as those she wants to target.

Rakhi Sawant compares fellow contestant Rubina Dilaik a dominating don who doesn’t let anyone else talk inside her house.

When asked about what name she would give to Abhinav Shukla, Rakhi hilariously terms him a ‘freezer’ stating that he is too cold.

See one fo Rakhi’s funniest moment on the show:

The biggest point of contention for Rakhi this season has been her constant claims of her mysterious husband.

The Bollywood actress attests she is secretly married, however, her husband wishes to remain out of the spotlight.

(I told him that I am going on a very big show and pleaded with him to come at least once. I requested him to not let me down.)”

Rakhi attests that she “got married under difficult circumstances” and that is why her marriage is not public knowledge.

She alleges that her husband is an important UK businessman, and shared her wedding pictures. 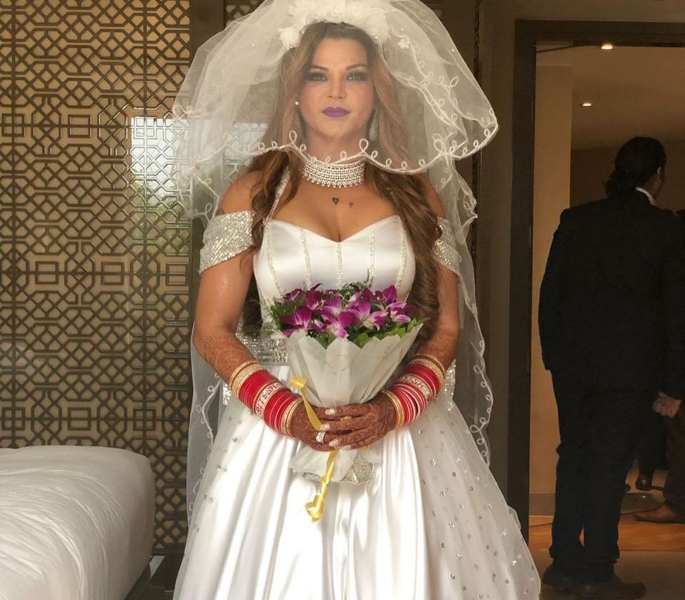 Rakhi mentioned how people think she is making everything up to grab headlines.

Hinting at Jasmin Bhasin and Aly Goni, who were also in the same room, she said:

“(Here, there are people, who are in a relationship but claim there are friends.

“I am shouting from the rooftops that I am married. I am not doing it for publicity.)”

She added that her husband requested for some time and said he would reveal himself to the world before they have babies.

Rakhi entered the Bigg Boss 14 house earlier this month with a number of other former contestants as ‘challengers’.

She will compete with the other contestants for the trophy.

Akanksha is a media graduate, currently pursuing a postgraduate in Journalism. Her passions include current affairs and trends, TV and films, as well as travelling. Her life motto is 'Better an oops than a what if'.
Bollywood Biopic on Chess Legend Vishwanathan Anand
Arjun Rampal in Trouble for Drugs Related Case?