An Indian woman, along with her grandmother, started a sweet business during lockdown that has earned £400,000 in less than a year.

“why don’t we start it at commercial level?”

An Indian woman, along with her grandmother, has earned £400,000 in just eight months with a sweet business.

Twenty-one-year-old Yashi Chaudhary and her 65-year-old grandmother Manju Poddar started the business from home during the Covid-19 lockdown.

The startup, Nani’s Special, began as an experiment, but it soon took off and has now become a worldwide business.

Chaudhary is pursuing a Masters degree in London. However, she moved to her grandmother’s home in Kolkata in 2020 due to Covid-19.

The pair began making Indian sweets, and are now receiving around 200 orders a month from as far away as the US.

Talking about the decision to start a sweet business, Yashi Chaudhary said:

“I went to my grandmother’s last year during lockdown. My grandmother is an expert in making all kinds of sweets.

“She has been fond of making something new every day. I became a fan of her by eating the sweets out of her hands.

“During that time an idea came to my mind that why don’t we start it at commercial level?”

According to Chaudhary, there were challenges to starting the business due to negative opinions about its success.

However, she and Manju decided to do it anyway, as they did not want to regret missing the opportunity.

Chaudhary went on to say that the pair began by selling sweets to acquaintances.

“He liked our sweets. He again demanded sweets from us. Similarly, customers joined us one after the other.

“After this, we formed a group called WhatsApp Special on WhatsApp and connected people to our startup through it.”

Yashi Chaudhary’s sweet business is clearly a family startup, as her mother is also involved alongside her grandmother.

Chaudhary oversees the overall business, her mother handles the orders and deliveries, and Manju makes the sweets.

According to Chaudhary, orders only came from Kolkata when the business started.

Now, the sweets are being sent to bigger cities including Delhi, Mumbai and Bangalore.

Yashi Chaudhary and her family have also sent products to the US and Hong Kong.

Due to increasing demand, the family startup is now producing more than two dozen products. These include 12 types of sweets, snacks, bhujia, matti, papad and pickles. 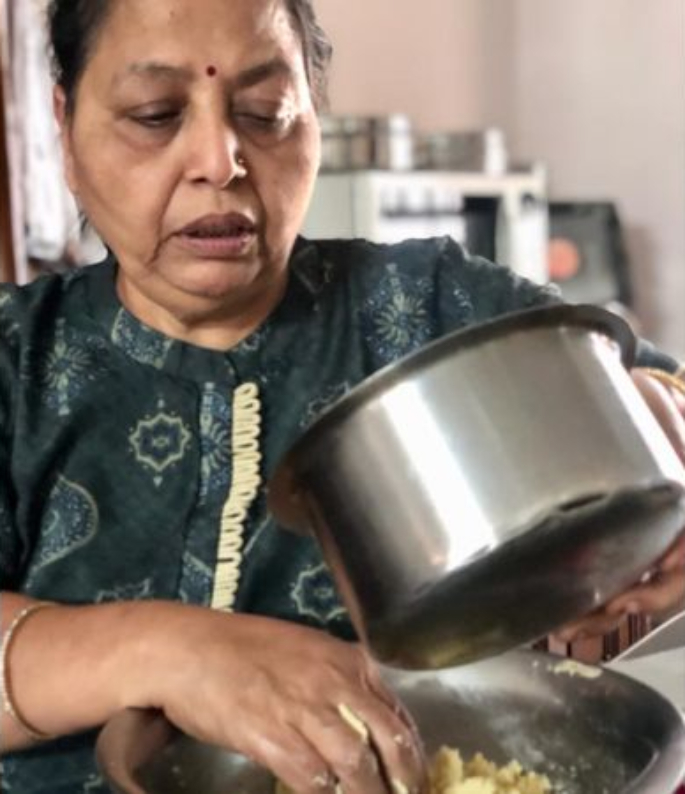 Yashi Chaudhary explained that orders increase dramatically during the festival season. She said:

“We prepare different sweets and dishes according to different festivals.

“For the first time Janmashtami, we received orders for 40 Thal sweets.

“There were four different types of sweets in a plate – mawa’s parwal, coconut grinder, peda and celery grinder.

“All these sweets were prepared by Nani herself.

“After this, we also got bulk orders on New Year and Makar Sankranti.”

Speaking of her family’s success, Yashi Chaudhary also has advice for those wishing to start a business. She says:

“Different locations may have different requirements.

“So first we have to find out where live or where we want to start a business, what is the demand for what there is.

“The second thing is that we have to keep our product special, so that there are no products of its comparison outside.

“That is, there must be some reason why people do not buy the product of the market and buy our made product. This can be due to quality and price.

“Therefore, research is the most important part.

“The third important thing is that we have to make customer-oriented products. Only then our business will get growth.

“According to their feedback, we should upgrade our product. Also, different varieties should be launched with time and trend.”

According to Yashi Chaudhary, listening to your audience and market research are the most important things to consider before starting any business.

Louise is an English and Writing graduate with a passion for travel, skiing and playing the piano. She also has a personal blog which she updates regularly. Her motto is "Be the change you wish to see in the world."
Kulwinder Singh acquitted for Wife’s Death by Fire
Human Trafficker forces Mother & Daughter to Board Plane