Indian Woman on Mission to End Period Poverty in India

An Indian woman is determined to end period poverty in India by introducing a new sustainable menstrual product.

The product can be reused for up to 10 years.

Period poverty is a common issue in most developing countries.

However, not much has been done to address this basic necessity of women.

But now, an Indian woman aims to find a permanent solution to end period poverty.

Ira is confident that her ‘Asan cup‘ is the answer to the period poverty issue in India.

How it all Started

Ira Guha was pursuing a Masters in Public Policy at Harvard University in 2017.

She returned to her home in Bengaluru to spend Christmas with her family. During that time, she found out that her mother’s household maid had taken time off due to periods.

When she returned, the woman explained that she has trouble with sanitary pads.

The lady explained that the cheap sanitary pads are very uncomfortable to wear.

The pads would also leave rashes and cause urinary tract infection (UTI).

The period poverty would halt the woman’s daily life for a few days every month.

Shocked after learning the facts, Ira provided the lady with a menstrual cup to try out.

The woman gave very satisfactory feedback after trying the cup and asked for more, for her sister too.

Upon returning to the United States, Ira would send cups for more domestic workers in India.

However, the cups Ira was sending back to India were costly.

Ira explained: “Though we were distributing high-quality cups from the US, the women reported leaks and difficulty in removal.”

There was also a rising demand for cups from more and more ladies in India.

Therefore she began exploring the idea of making a sustainable menstrual cup, one that would be affordable to the period poverty countries.

Ira partnered with a former consultant and engineer named Anuradha Mahadevan to design the cup.

They designed the “world’s best menstrual cup for women” with a removable ring.

This marked the launch of the ‘Asan cup‘.

Facts about the Asan Cup 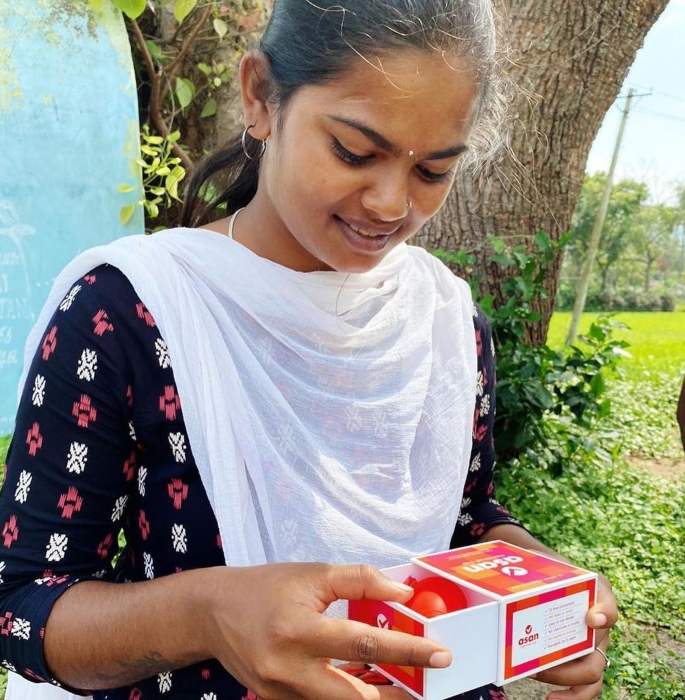 It is designed with the engineers at the Harvard Innovation Lab.

The cup is made from medical-grade silicone and it includes a unique removable ring.

The product can be reused for up to 10 years.

Although it is comparatively cheaper than similar products, it is still not accessible for many Indian women.

This is due to poverty and ignorance.

Ira explained: “Half the women in the developing world do not have access to any kind of period product.”

Therefore Ira and Anuradha launched the ‘buy one, donate one’ campaign.

They have partnered with different women’s health NGOs who have access to rural parts of India.

But Ira has extra work to do in rural areas in addition to tackling period poverty and that challenge is to break misconceptions.

“Our mission is much broader than just selling a menstrual cup.”

“It’s also about conveying the right kind of information – teaching women not only how to use the cup but also about anatomy.

“Our user guide has been designed by gynaecologists.”

Ira is confident that her innovation will break the psychological barriers and end period poverty.

Ira was awarded the Warner Fellowship by Harvard’s Women and Public Policy Programme for her initiative.

She is further collaborating with different corporates to sponsor cups in the villages under their CSR programs.