A man in Andhra Pradesh watched Bigg Boss and Avatar to stay awake while doctors in a hospital performed brain open surgery on him.

An anecdote of a 33-year-old man watching Bigg Boss (2020) and Avatar (2009) during his brain surgery has stormed social media.

Brain surgery is one of the most difficult operations which have started using the most evolved technique with patients remaining awake throughout the procedure.

Awake craniotomy is a surgical technique performed on patients with brain tumours in or near critical brain areas.

Patients are awake during their surgery, often captured doing what they like, to keep themselves calm.

Over time, many videos and photos have surfaced on the internet that shows patients engaged in other activities as doctors perform surgery on them.

Doctors at Brinda Neuro Centre in Guntur conducted critical open brain surgery on the man while he was awake.

He watched Bigg Boss and Avatar on a laptop during the surgery, as he had to be kept awake throughout the operation.

A trio of doctors removed a recurrent glioma from his left premotor area abutting the mortal cortex. 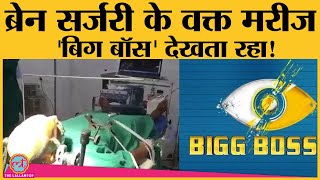 Earlier this year, a woman played her violin while undergoing critical brain surgery.

Dagmar Turner, a professional violinist, was undergoing an operation at London’s King College Hospital to have a tumour removed from her brain.

Turner is a performer in the Isle of Wight Symphony Orchestra. On January 31, 2020, she was undergoing brain surgery.

But in the middle of the procedure, she was bought out of anaesthesia to play the instrument.

She played it to ensure that her crucial hand movements and coordination kills were not impaired by doctors.

The tumour was successfully removed from her right frontal lobe, near an area that controls the fine movements in her left hand.

Turner’s skull was open before she was brought out of anaesthesia by anesthesiologists and a therapist.

In June this year, an Italian woman was captured preparing traditional stuffed olives while doctors were performing surgery on her.

Another man in 2018 was captured reciting Hanuman Chalisa during his surgery.

Again, in the same year, a UK woman was seen singing songs and cracking jokes with doctors during her surgery.

Akanksha is a media graduate, currently pursuing a postgraduate in Journalism. Her passions include current affairs and trends, TV and films, as well as travelling. Her life motto is 'Better an oops than a what if'.
Man kills Father to get Govt Job on Compassionate Grounds
Indian Man films Woman Bathing, Rapes & Blackmails Her