A 63-year-old Indian man who gained popularity after being seen in a viral video was tragically murdered in Kochi.

"I can’t forget that moment and I am indebted to him.”

A 63-year-old homeless Indian man who was known for being in a viral video has been murdered.

The video showed Sivadasan decorating Kalam’s statue with flowers, as he reportedly did every day.

In the video, Sivadasan shared he had met the former President two times in his lifetime.

He shared: “At Thiruvananthapuram, I was standing in the crowd and he came to me and gave me Rs 500 (£5) saying ‘keep this for travel expenses’.

“I can’t forget that moment and I am indebted to him.”

The statue of Kalam was installed by the Greater Cochin Development Authority (GCDA) in 2016 as a tribute to the former President.

Sivadasan admitted that he had been regularly decorating the statue with flowers since its instalment.

For the last three years, Sivadasan has been sleeping on the Marine Drive walkway in the city.

The viral video won the hearts of India’s throughout the country and bought Sivadasan a lot of fame. 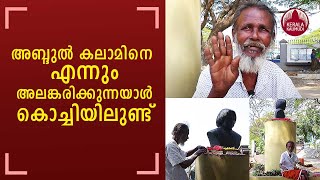 A post-mortem report stated that he had suffered internal injuries after being beaten.

A man identified as 40-year-old Rajesh has been arrested. It was reported that he was Sivadasan’s friend.

Witnesses claim that they had seen the pair fighting on the day of the incident.

“Sivadasan had recently got much publicity for decorating the Adbul Kalam statue with flowers.

“We have learned from many people that the accused was envious over this.”

“Many people had seen the man thrashing Sivadasan for two days (on the day of the alleged murder and a day before).”

Reportedly, Rajesh and Sivadasan have been friends for years, they lived in the same area.

However, recently Sivadasan had been the recipient of a lot of attention for his noble deed.

Passers-by started recognising Sivadasan in the viral video and offered him money.

Rajesh was allegedly envious of the attention his friend received.

On the night of December 15, 2020, Rajesh, who was reportedly drunk, got into a fight with the older man and killed him in a fit of rage.

Akanksha is a media graduate, currently pursuing a postgraduate in Journalism. Her passions include current affairs and trends, TV and films, as well as travelling. Her life motto is 'Better an oops than a what if'.
Air Travel to India banned over Covid-19 Variant
Pakistani Man blames Son’s death on Polio Vaccine