Four Indian drug smugglers were caught trying to smuggle 100 kilograms of Fentanyl. The drugs were valued at Rs. 1,000 Crore (£113 million).

Four men, from Mumbai and Palghar, India were arrested on Wednesday, December 26, 2018, after they were caught trying to smuggle Fentanyl.

The Anti-Narcotics Cell (ANC) surrounded a parked car and seized approximately 100 kilograms of the banned drug.

The Fentanyl is reported to have a value of Rs. 1,000 Crore (£113 million). It is the largest amount of drugs seized by Mumbai police so far.

According to the ANC chief, DCP Shivdeep Lande, they laid a trap after they received a tip-off about the delivery of Fentanyl.

Salim Dola, aged 52, Chandramani Tiwari, aged 41, both of Mumbai, and Sandeep Tiwari, aged 38, and Ghanshyam Saroj, aged 43, both of Palghar, were caught outside Mumbai airport.

It’s reported that Salim Dola is linked to the notorious Dawood and Mirchi drug gangs.

According to the tip-off, Dola and two others were expected to arrive at a spot in Vakola, Santacruz East at 8.30 pm local time with the drugs consignment.

It was reported that the drugs were to be taken by air cargo to Mexico and they were disguised in wheat flour.

The vehicle stopped near a tree on the road where a fourth accomplice was already waiting near his scooter.

After a brief exchange between the two parties, one of the occupants in the car came out and handed over a blue coloured container.

The ANC team quickly moved in on the exchange and caught the men. As well as recovering the blue container, there were three more containing the drugs from the vehicle.

In addition, the car and scooter were seized by ANC officers.

The drugs were taken and were later found to be the very high-priced Fentanyl drug, which is said to be 50 times more powerful than heroin.

“We are in the process of raiding and finding the unit in Gujarat from where the consignment came but it’s a technical process and will take some time.”

According to police officers, they said that a mere 25 grams of the drug is lethal enough to kill a man. 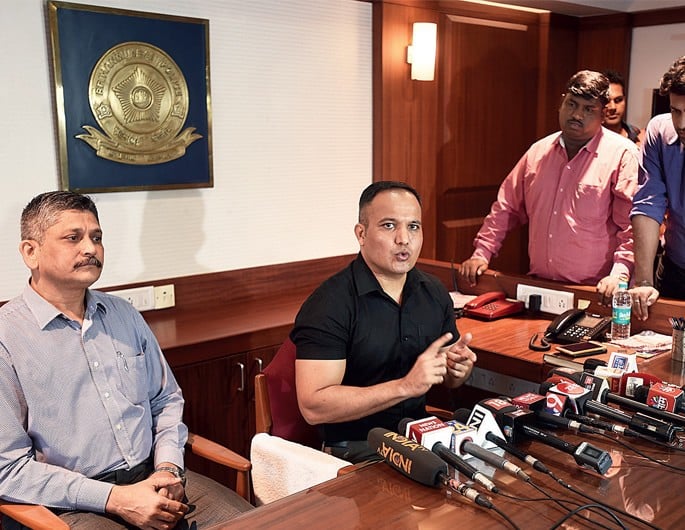 Police confirmed that Dola has also been arrested a number of times previously for offences all related to narcotics. Including his arrest in 2017 when he was caught for gutka worth Rs 5 crore heading for Kuwait.

Regarding Dola’s connection with the Dawood gang, an ANC officer told media:

“We have information that Dola is still working for an organised crime syndicate led by an Indian. We are working on getting further details about the entire operation.

“Dawood Ibrahim’s nephew Sohail has already been arrested by the US for trying to sell drugs.

“Dola has worked with the Mirchi gang and we suspect he is again working for the D-Company (Dawood gang). We know he was taking orders from an Indian.”

During interrogation, police have stated that Dola is not showing any co-operation.

Fentanyl is considered a party drug which is originally an anaesthetic medicine but made into a recreational drug, with a lethal mixture of heroin or cocaine.

The drug is responsible for approximately 20,000 overdose-related deaths in the US in 2016.

The four drug smugglers were arrested and a case under relevant sections of the Narcotic Drugs and Psychotropic Substances Act was registered against them.

They have been remanded in police custody until January 1, 2019.

A police official added that further investigation is underway as they suspect the four men are part of an organised crime group, smuggling drugs in and out of the country.

Dhiren is a journalism graduate with a passion for gaming, watching films and sports. He also enjoys cooking from time to time. His motto is to “Live life one day at a time.”
UK Transfer for jailed Khadija Shah and Daughter in Pakistan?
Asians on New Year Honours List 2019