Bibin, a Barclays Apprentice in Leadership and Management, talks about his experience, his degree studies, and why this isn’t your average apprenticeship.

“I would say go for it. It’s an amazing opportunity and totally worth doing"

Get a degree. Get experience with a world-class bank. Get on the path to becoming a future leader. And do it all in three years, with no previous experience and no tuition fees.

How? As a Barclays Higher Apprentice. With options from Leadership and Management to Internal Audit, Barclays’ programmes are throwing open the doors to Higher Education.

The best part is, the programmes are open to all kinds of people. As long as you’re over 16 and have either 80 UCAS points (or 200 gained pre-2017) or a year of work experience gained anywhere at all, you’re eligible. It’s the chance for anyone – of any age, any culture, any social background – to study for their degree as they work within the bank.

That’s just the path taken by Bibin, one of Barclays’ current Higher Apprentices in Leadership and Management. An EU citizen born in Vienna, Bibin’s family moved to India and he grew up in Kerala, but he’d always wanted to take on Higher Education in the UK.

“Since I could work in the EU without a visa, I came to London on my own and did college for three years,” recalls Bibin. “Then after college, I had a lot of different options. I actually went through the UCAS process and got accepted into a couple of Russell Group universities.”

So what made him change his mind about university? Well, it was his college friends who first planted the seeds of an apprenticeship:

“Getting a degree was what was in my head, and I just didn’t know that was possible on an apprenticeship. My friends were more interested in going straight into business, so when they told me, I started researching it too – and I was really impressed.”

For lots of people though, it isn’t just about your own expectations – you might feel you have to consider what your family think, or even your wider community. Bibin himself didn’t know anyone who’d opted for an apprenticeship over university. But armed with accurate information, it wasn’t hard to convince his family of the appeal:

“My parents are really open minded,” Bibin says. “Naturally they wanted me to get something valuable out of whatever I did, but when I told them about the degree and the professional qualifications involved, they were pleased.”

The course was clear. Deciding to forgo university and get a degree as he worked, Bibin discovered the Leadership and Management Higher Apprenticeship at Barclays. 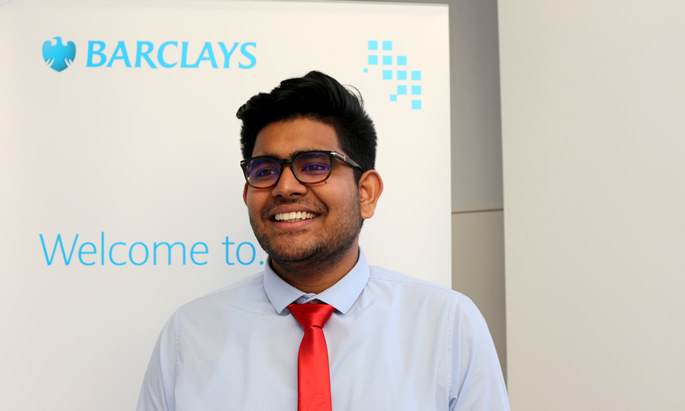 Don’t let the programme’s impressive title intimidate you though. Barclays are training future leaders of one of the world’s biggest banks, but they don’t expect you to have any experience beforehand. As Bibin puts it:

“I had an interest in a career in finance, but I really didn’t know anything about banking before this. I think some people think you have to be really good at finance or that you have to know everything about the banking sector, but it’s just not true.”

The Leadership and Management programme – one of a range of subject areas offered at Barclays – sees apprentices work towards becoming team leaders and managers of branches and call centres up and down the UK. And all while they work towards a BA (Hons) in Leadership & Management.

“The main point of it is to gain experience as you climb the leadership ladder,” says Bibin. “I started training as a moment banker for the first six months, then moved to start helping out the leadership team. You’re learning what it takes to be part of the team you’ll manage.”

Of course, with the programme offered in locations across the UK, it offers potential apprentices the option to move to new locations, depending on what’s available. For Bibin, that new location was Liverpool, and his new team even helped him find a place to live:

“People are so friendly here, and that kind of support is so valuable. My confidence levels used to be quite low, but now I feel like I can take on anything that’s given to me, because I know I’ve got support.”

But it’s not just his confidence that’s improved. Throughout the programme, each apprentice learns the ins and outs of this global bank, as well as all the skills it takes to follow their ambitions and become a future leader. Bibin is no exception, finding the freedom to explore new skills:

“My team leader is really keen on my learning,” Bibin tells us. “If I want to explore something or shadow someone in a new experience, I get that opportunity. They care for your personal development.”

Then, of course, there’s the academic aspect of the course. Each of Barclays’ Higher Apprenticeships is structured so that the apprentices balance their real day-to-day role with studying for their degree – giving them academic skills matched by practical experience. It’s a big challenge of course, but one that everyone takes on together:

“I had my first study block in October and it was amazing,” enthuses Bibin. “Two weeks in Nottingham with the 28 of us doing Leadership and Management this year, doing lectures, assignments, and getting personal support with our learning.”

The cohort supports each other a lot; it’s clear to see. They get along exceptionally well, coming from a wide range of backgrounds and age ranges. As Bibin puts it: “Everyone has equal support, equal importance. That’s just the way Barclays treats us.”

So what would his advice be for any potential applicants?

“I would say go for it. It’s an amazing opportunity and totally worth doing. This isn’t just a degree but a real taste of what it is to be a leader, and it’s rare to experience that so quickly, with so much support. That’s why it’s not your average apprenticeship.”

To find out more about Barclays Higher Apprenticeships, click here.

Two HSBC Bank Workers jailed for Stealing over £220,000
Jealous Brute jailed for Beating Epileptic woman to “feel like a man”