India Marwaha is a young Scottish goalkeeper within women’s football. She exclusively chats to DESIblitz about her career and aspirations.

"I rushed to my feet and ran to my teammates to celebrate."

She was born India Romy Marwaha in Glasgow into a family of mixed heritage. Her father Kamal Marwaha is Scottish Indian.

studied at Bishopbriggs Academy in Glasgow before attending the University of Strathclyde.

In an exclusive conversation with DESIblitz, India Marwaha opened up about her football beginnings, goalkeeping, accomplishments and dream within the beautiful game.

When and how did your football journey start? 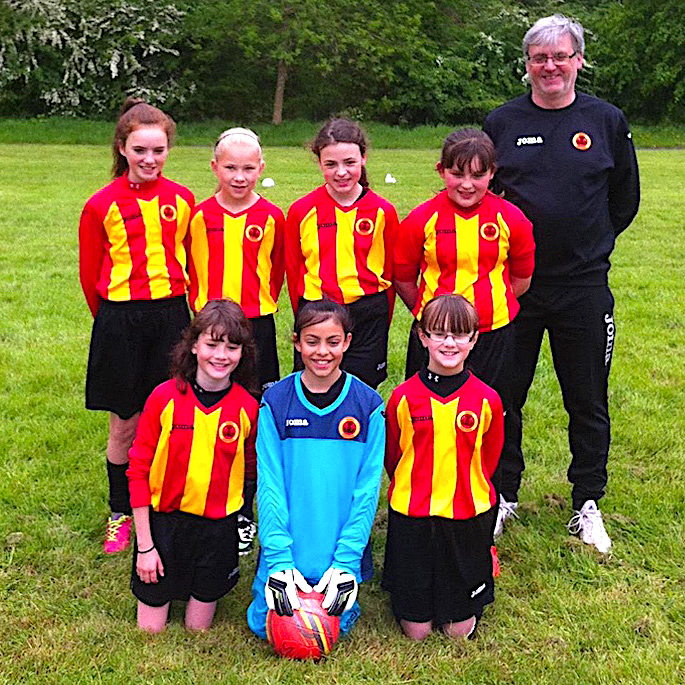 My football career started at the age of 9 when I joined my local football team. I started out as a striker but soon realised I liked saving the goals rather than scoring them.

My journey of becoming a goalkeeper began when I was asked to jump in goals. We had no keeper and without any hesitation, I put on the gloves and gave it my best.

I was scouted for another team called Glasgow Girls soon after my transition into goals at age 11.

I played with Glasgow Girls for a total of 3 years, winning many cups and tournaments with the team. However, I felt that my time had come to an end.

Eventually, I got a trial for Celtic Academy Under 15’s. Since then, I have continued to grow as a player within the Academy.

I even made my debut with the women’s 1st team during early 2022 in the Scottish Cup against Edinburgh City.

Describe your debut U-19 game and how did it go? 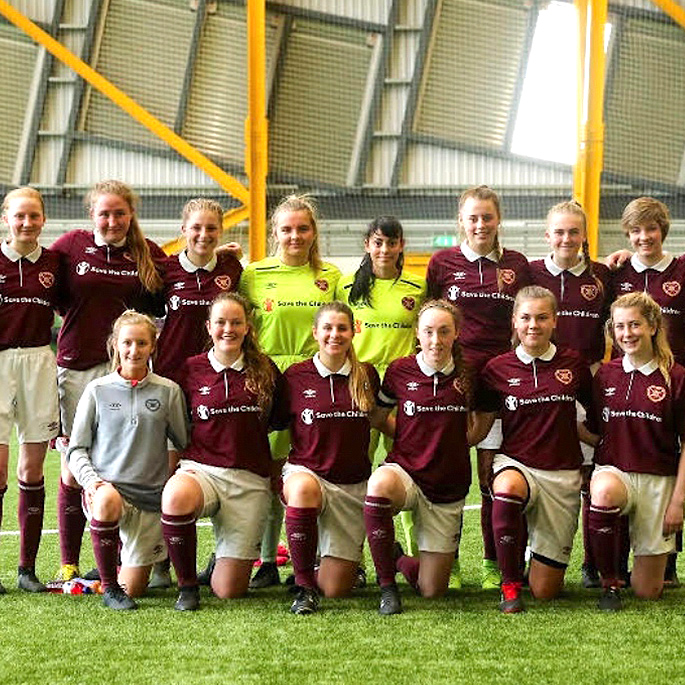 During my time at Celtic FC, I was put on loan for Hearts FC. It is at Hearts where I made my first U-19 debut.

We played against a club called Jeanfield Swifts Girls FC where we drew 4-4. This was my first time meeting my team at Hearts so there was a lot of pressure on me.

I felt nervous but confident in my own ability as a goalkeeper. It was a challenging game for us as a new squad and a new formation takes time to get used to.

“However, we fought hard to get the draw as the score line was against us.”

During the last minutes of the game, the opposing team had multiple chances to steal the win.

Though great shots were met with equally great saves. This made me feel great about my debut and confident going forward in the league with a new team.

How does your training differ from field players? 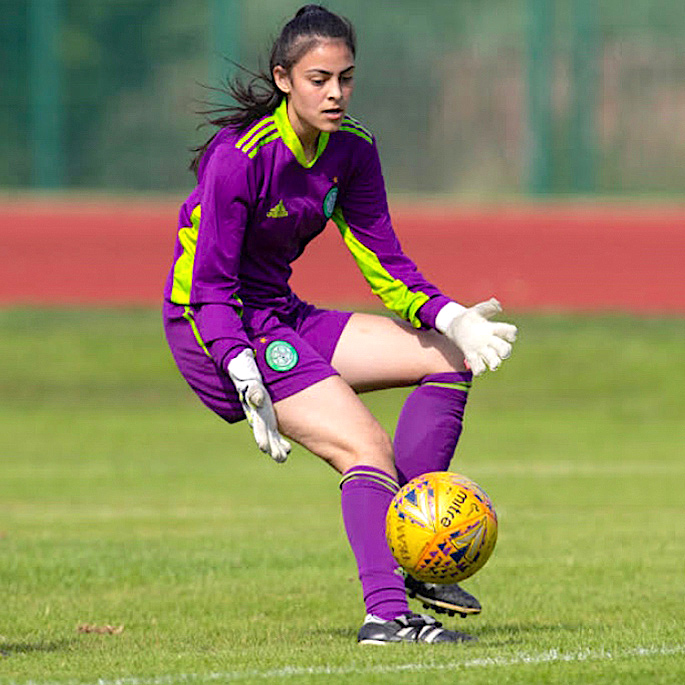 Their training isn’t as targeted as a mine. My training consists of short, sharp exercises that mimic game-like situations. This is because goalkeepers make a lot of reaction saves that takes good agility and decision making.

To be a goalkeeper isn’t always about making fancy saves, you must be good at the basics. Patience is key as you will never know when you will be needed.

We have a drill that consists of quick-fire shots from multiple angles that require good positioning and fast reflexes to save the ball to improve shot-stopping.

What are the challenges of playing league football? 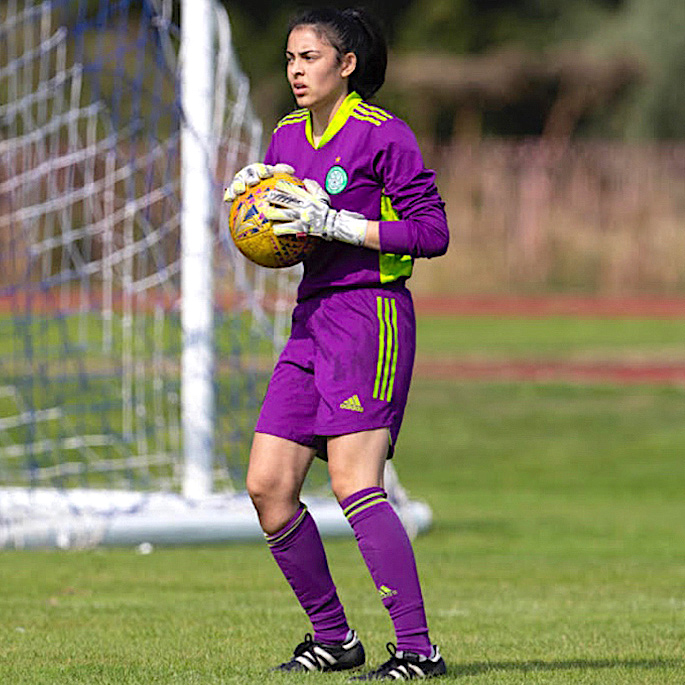 Playing in such a competitive league every week can be challenging. This is because I train three times a week with a game at the weekend, alongside going to university during the day.

Physically, playing and training can be very straining on my body as I am pushing myself to be always at my best. However, this isn’t always the reality.

Injuries have occurred such as a broken finger, which has caused me to stop playing. Injuries can occur at the worse times.

Without proper rest and healing, injuries can persist over time, affecting your overall performance on the pitch.

Playing in a big-league allows us to play different teams from across Scotland giving us a wide range of opponents. That itself challenges us in every game.

“Finding a balance wasn’t easy as putting aside time to focus on both football and studies was difficult.”

Though, with support from my team and family, I am able to get ample training whilst still having time to study.

Tell us a little about your key glory moments of football? 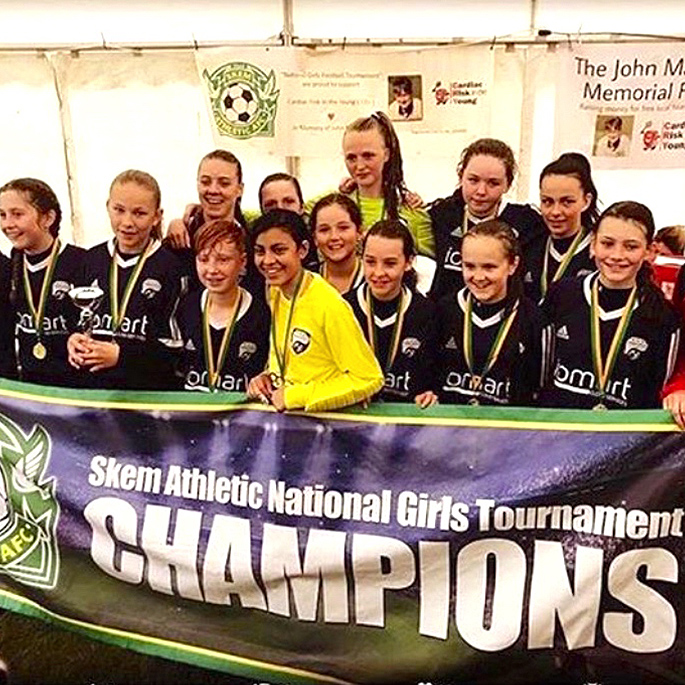 One of the biggest glorious moments for me was when Celtic won the Shaap National Performance League.

Another key moment for me was when I was on loan with Hearts FC playing in the quarter-finals of the league cup. This was against my old team, Glasgow Girls FC.

The game was memorable as it came down to a penalty shootout to go through to the next round. We were level as the game went to sudden death.

This meant that if my team missed a penalty and the opposition scored, we would lose. My teammate scored an amazing penalty to keep us in it, meaning pressure was high to save it.

“Hence, I stayed on my feet, so I could try to anticipate the side my opponent was going to go. With that in mind, I dived to my right and saved it. I rushed to my feet and ran to my teammates to celebrate.”

Naturally, I have been part of many other champions teams at various levels, whilst playing for different clubs.

What are your strengths as a goalie and strategy when saving penalties? 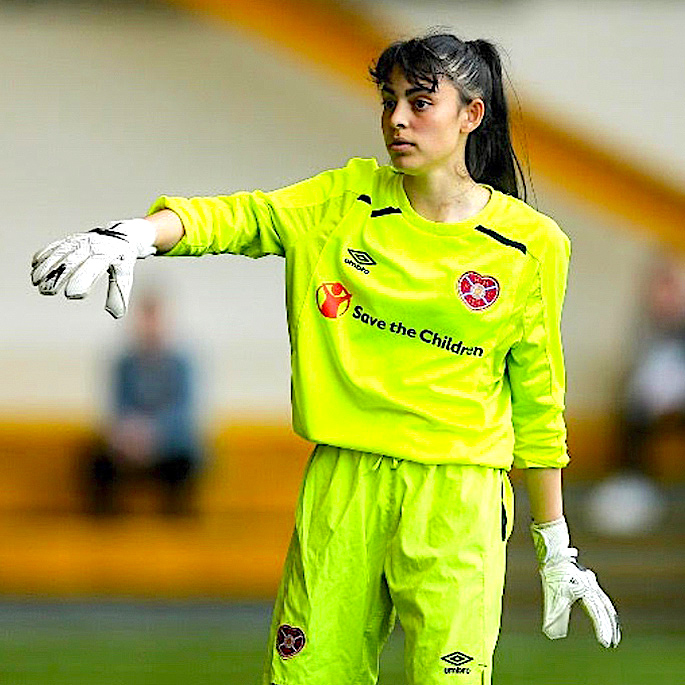 I am very agile in goals during penalty shootouts. This allows me to get down quickly and save them, giving me more time to stay on my feet to see where the ball is going.

My reactions are very good as well allowing me to readjust quickly if the ball is moving in the air. Good reactions are something that all goalkeepers need in case you find yourself in perhaps a one-on-one situation.

Also, during a one-on-one situation against the opposing striker quick reflexes and fast decisions are important.

This allows me to anticipate where the ball is going and make myself bigger to decrease the size of the goal behind me.

“The striker has less opportunity to score in such a situation.”

This is vital as if you make a mistake in these situations it can lead to a foul for the other team, resulting in a penalty.

Your first name is also a country – any interesting stories relating to that? 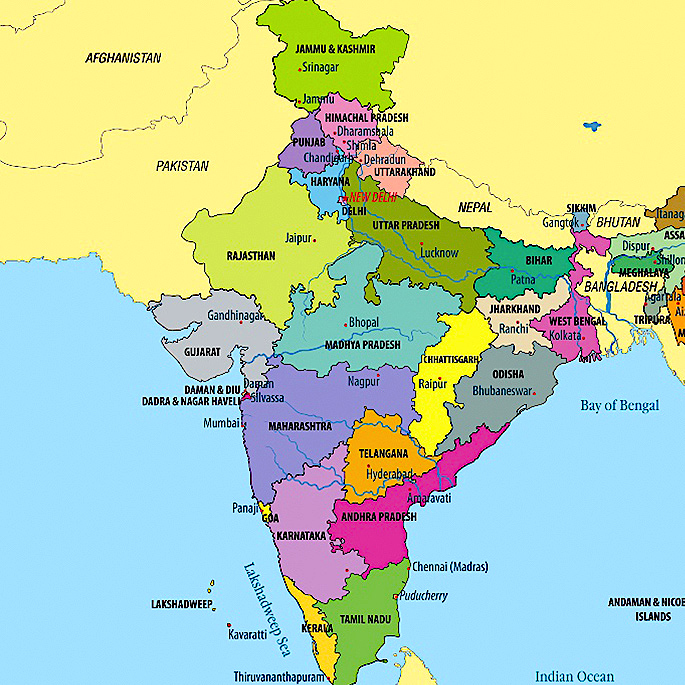 Since I have a lot of family that comes from India, and it’s a big part of my dad’s heritage my parents wanted to connect me to my roots.

Growing up with such a unique name has helped me stand out and be more confident. This is because it’s a very special name that ties me to the culture and faith of my family.

I also have a big personality as I am very outgoing and loud. Some people would say that I suit my name because of this.

I have always wanted to go to India and see where my family comes from. It’s a big part of my life that I know so little about. I will love the opportunity to experience the culture and beautiful landmarks of India first hand.

Who would you like to represent internationally and any flexibility on this? 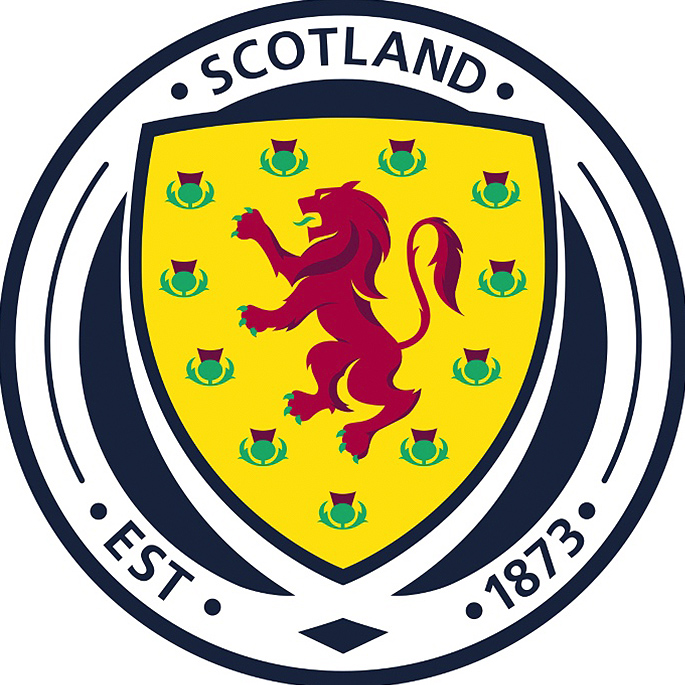 I would love the opportunity to represent Scotland as I am born and raised here. Most of my family would love to see me play for them as this is my home.

I have also been to a couple of Scotland games and support the men’s and women’s teams wherever they go. So, to represent them will be such a huge and proud moment for me at any level.

However, if an opportunity to play for India comes, I will also jump at it. This is because I have such big roots and ties to the country. My dad’s side of the family all come from Jalandhar in India.

“A big part of my heritage comes from India, along with sharing the same name of the country.”

Representing any country is a massive honour that I would feel privileged to do. If the opportunity ever presented itself, I would say yes for both national teams.

What are your football goals going forward? 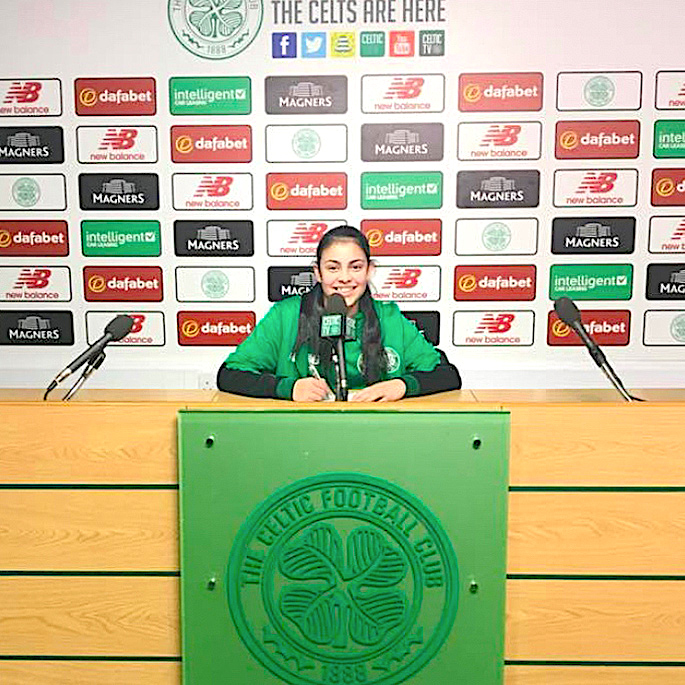 As I am soon to age for academy football, I want to build up experience playing in women’s football preferably in the SWPL 2 (Scottish women’s Premier League 2).

This is so I can get consistent games eventually to then find a team that is well suited for me to join in the SWPL 1.

I have been to a few training sessions with Celtic Women’s first team. Having seen the level that they play at has driven and inspired me to push myself even further.

This is so I can one day reach that level within my football career.  I have been at Celtic for four years, working my way up the age groups from U15s to U19s, developing massively at each level.

The experience I have gathered from playing in competitive leagues and cup games gives me confidence that I will find a first-team that will take me to the next level within my career.

What advice can you give young goalkeepers who are just starting out? 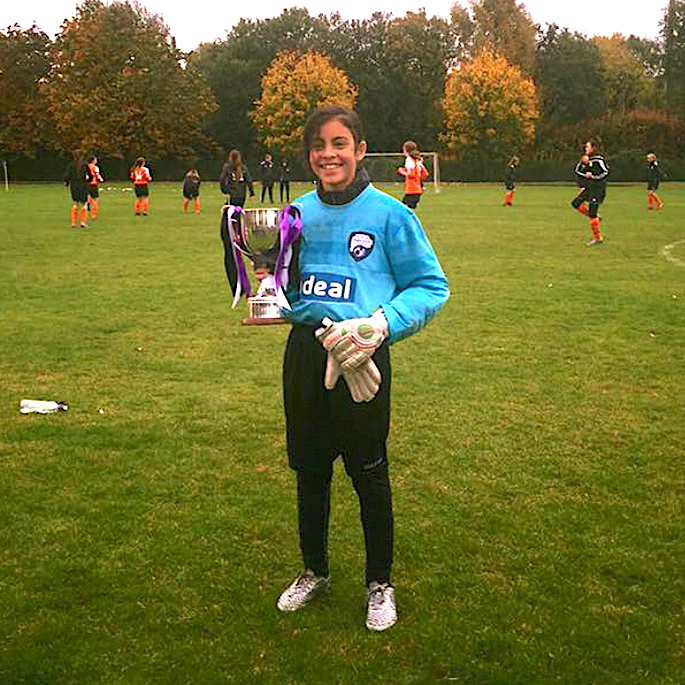 A piece of advice I wish I got as a young girl playing football was never let anyone bring you down or hold you back from your dreams, as anything is possible.

This game is thrilling and amazing, but it also can be tough and challenging and with these challenges you can experience setbacks in your career.

These setbacks are only temporary problems that anyone can overcome with great determination and resilience.

“As a goalkeeper mistakes will happen at all ages and levels, and someone will always want to criticize how you played.”

Don’t listen to all the hate and try to move on and learn from these mistakes as they don’t define your ability as a keeper.

To be a great goalkeeper you must be brave and confident with the ball as well as in your hands. Never be afraid to try something different or new as you may surprise yourself and others and make the impossible, possible.

It is quite evident that India Marwaha wants to forward with her career. She has set her eyes on playing first-team football.

Representing Scotland or her father’s country of heritage is the ultimate dream for India Marwaha.

Everyone can keep updated with India Marwaha by following her on Twitter.