A USA-based Indian woman defeated the world’s richest man to be elected for the Seattle Council. Kshama Sawant revealed how it was possible.

"I won because of the support of ordinary people"

USA-based Indian woman Kshama Sawant went up against Amazon’s founder and the world’s richest man Jeff Bezos to win the election in the Seattle Council.

Despite investing $1.5 million into the local election to defeat progressive candidates, Jeff Bezos lost and Kshama was elected for a third term.

Kshama declared victory on November 10, 2019, calling the results a “repudiation of the billionaire class.”

Kshama, who grew up in Mumbai, ran a grassroots campaign with the slogan ‘Tax Amazon’ that raised over $570,000 from ordinary people and unions.

The campaign also attracted over 1,000 volunteers who worked the telephones and knocked on doors.

Even though it was a local election, Seattle is home to some of the United States’ biggest corporations including Amazon, Starbucks and Boeing.

Her fight against Bezos as well as her own strong political record made waves across the country. Sawant said:

“Around the world, with local variations in flavour, elections have been heavily influenced by big corporations, the corporate media and corporate politicians.

“Some elections do have a smattering of progressive candidates, but they often do not build a movement.

“I won because of the support of ordinary people and the backing of a movement.” 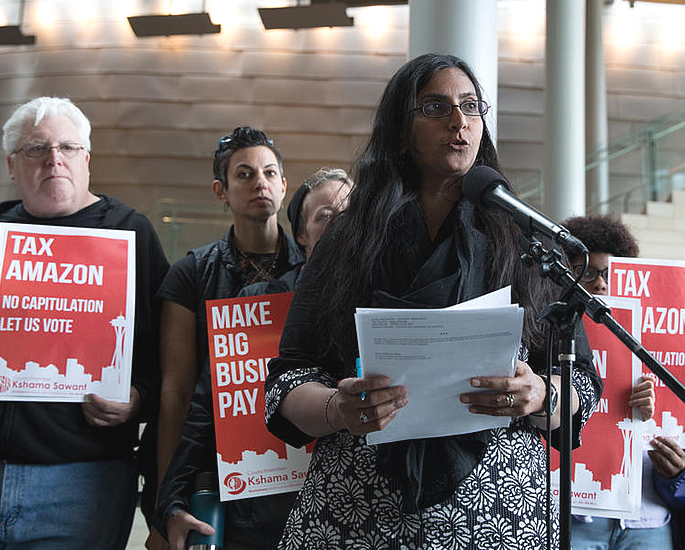 Kshama was supported by people from all types of jobs. Over twenty unions also supported including one that represents security officers on the Amazon campus.

The money poured in by Amazon angered the locals. They subsequently produced a high turnout of 60% to give the Indian woman victory by nearly four percentage points.

Only one candidate backed by the business sector won, despite the companies, including Amazon, investing over $4 million to support candidates of their choice.

Washington state’s Seattle has become a thriving technology hub, which has created many professionals.

“Seattle is an absolutely gorgeous city. But it is also deeply unequal.”

“Gentrification is happening at such a rapid pace that even the middle class is having difficulty regaining its foothold in the city.

“So you have a booming city, but also rising homelessness. The gains in productivity are siphoned off to the top. It is a great example of why capitalism is so dysfunctional.”

After leaving Mumbai in 1996, Kshama eventually moved to Seattle in 2009 to work there as an economics lecturer after getting her PhD.

She entered politics in 2014 where she became Seattle’s first socialist in an elected position in almost 100 years. Kshama focused on the demand to raise the city’s minimum wage.

After being re-elected in 2015, the Indian woman pushed for a “head” tax, or tax per employee, of $275 on big corporations to raise funds for public housing and other useful buildings.

The proposal was passed, however, seven of the nine members, except Sawant and one other, voted to repeal it after Amazon threatened to take its expansion plans to another city.

Kshama’s third term means she will now try to have it passed again. If it is passed, Amazon will be the biggest source of revenue from this tax.

A head tax would find a way around Washington’s tax system where the rate decreases as the income scale increases.

While the political parties in Mumbai do not focus on class and livelihood, in the USA, Kshama is just one of a growing number of progressives who are winning elections.

Some of Kshama’s opponents have verbally insulted her, calling her a “Trotskyite.” However, she told Mumbai Mirror that she embraces the label:

“The situation in a neo-colonial nation like India is different from that in an imperial power like the US.

“While recognising the brutality of caste, the Indian working class has to unite and fight. But its fate is also linked to the fate of its US counterpart.”