Has the next Batman Arkham Game been Leaked?

With the purported leaking of the next Batman Arkham game, DESIblitz breaks down what to expect from the next entry in the critically acclaimed series.

It was claimed that the game will be a prequel to the main series.

Recently, the gaming world has been taken by storm with the supposed leak of the next Batman Arkham game.

In a post on Reddit (now removed), an individual claiming to be an employee at Warner Bros. Montreal seemingly revealed the next game as “Batman Arkham Insurgency”.

In the post, the individual claimed that the game will be a prequel to the main series. It will reportedly take place three years after Batman Arkham Origins.

The game will purportedly revolve around a joint breakout at Arkham Asylum and Blackgate Prison. The residence of the majority of Batman’s villains.

It will let players loose in the evacuated coastal areas of Gotham. The Reddit post claimed these areas will be roughly the same size as the playable area in Batman Arkham Knight.

The post went on to claim that Robin will also feature in the game. The game’s villains will be the Court of Owls – a sinister, secretive criminal organisation recently introduced in the Batman comics. Alongside the Court, “Batman Arkham Insurgency” will purportedly feature a number of other villains, most notably Mad Hatter, Two-Face, and a return of the Joker. 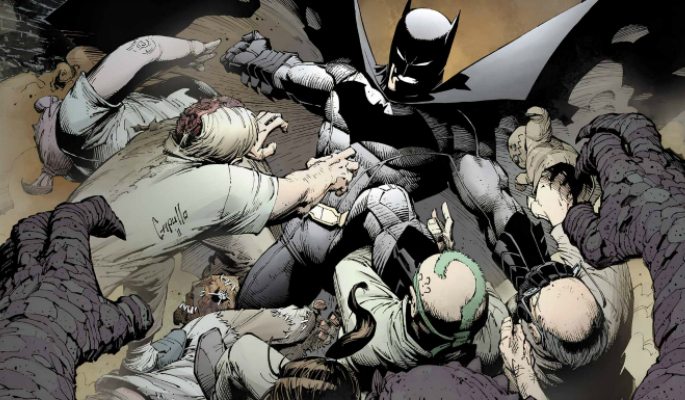 The Batmobile will also make a return, the post claimed. The focus this time will be much more on chase sequences rather than the combat previously seen.

For fans of the Batman Arkham series, this news might sound exciting. However, many have questioned the post. There has yet to be verification that the Reddit author is actually a Warner Bros. Montreal employee.

More significantly, rumours have been circulating for months now that the next Arkham game will be quite different to the Arkham Insurgency of the Reddit post.

A number of sources have claimed that the next entry will see Bruce Wayne’s son, Damian, take on the Batman mantle. This game will purportedly take place years after the end of Batman Arkham Knight. Alongside Damian, it claimed to feature an older Bruce Wayne as a mentor to the new Batman.

The game also supposedly features aged or re-imagined rogues from the previous Arkham games. These include the Riddler, Penguin, Two-Face, Poison Ivy and a female Black Mask. In addition, the game reportedly introduces new villains, including Talon and Katana.

If these rumours prove to be correct, the game will also feature a ‘Nemesis’ system, as seen in 2014’s Shadow of Mordor. This will mean criminals that manage to beat the player will rise up through the underworld, gaining notoriety and becoming harder to defeat. If the player is able to beat them, the system will purportedly allow for criminals that are powerful enough to be broken out of prison – forcing a second encounter.

Many Batman Arkham fans have taken to this rumoured game. With multiple leaks and confirmation by numerous sources, it calls into question the veracity of the Arkham Insurgency.

Regardless, with a vast number of rumours regarding the next entry, it seems likely that an announcement will soon be coming.

Be sure to keep your eye on the sky for the Bat Signal’s return.